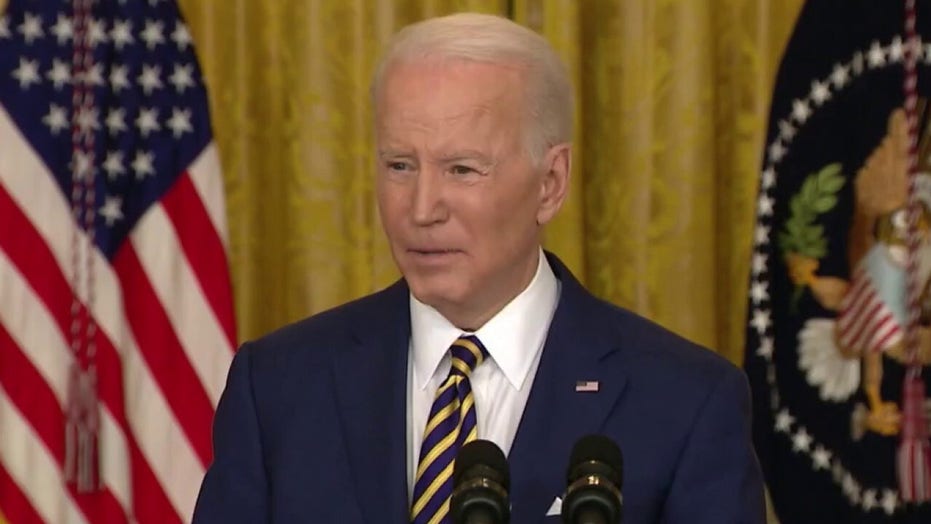 Today, Europe seems on the brink of war.  Russian has massed troops along the border with Ukraine and launched cyberattacks. The Pentagon revealed Russia has already sent agents across the border to begin false flag operations. Russia’s hybrid war against Ukraine has already begun, an invasion could follow.

While American officials are scurrying around Europe trying to stave off a crisis, President Biden seemed to give Putin a qualified green light at his Wednesday press conference when he said a “minor incursion” into Ukraine might not trigger a response.  A day later Biden tried to clarify his remarks, defining an invasion as “any assembled Russian units (that) move across the Ukrainian border.” But he only made matters worse.

Putin doesn’t need a hot war to achieve his objectives of isolating and destabilizing Ukraine. Hybrid warfare may even be his preferred option – it is just as effective but holds less risk of things spinning out of control or triggering a European or American response. False flag operations, cyberattacks and disinformation campaigns are slow-rolling, ambiguous and anonymous.

If this crisis had happened a year ago, things might have been different. 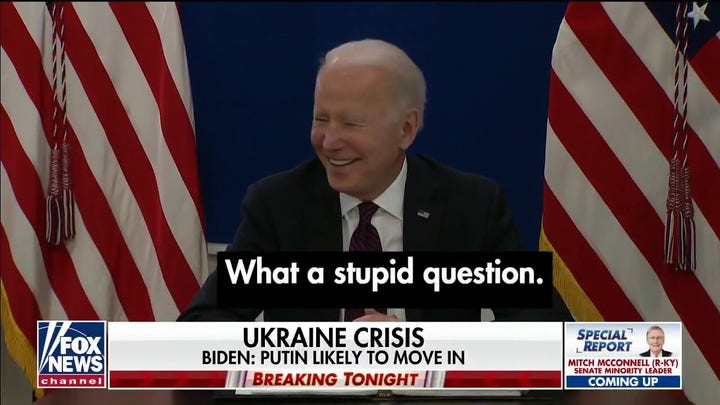 Last year, America held all the high cards – we were emerging from COVID with a strong economy. Oil and gas prices were low, employment was high and inflation non-existent.  Meanwhile, Russia was suffering from greatly reduced energy revenues, a sputtering economy, and widespread COVID outbreaks with no effective vaccine or treatment in sight.

How did things get this bad, this fast?

But oh how things have changed in just a year! Upon taking office, President Biden reversed course on President Trump’s policies and threw all our high cards away. Today our economy is flagging, inflation is at an all-time high, we’re importing expensive oil again, and President Biden is perceived as weak, incompetent, and unpopular.

Vladimir Putin has spent the last year seizing this unexpected opportunity.  He is now poised to realize his decades’ long objective – to restore the Russian empire.  Ultimately, Putin would like to bring Ukraine back under Moscow’s historic control. At a minimum, he would prevent Ukraine from forging closer economic ties with the West and joining NATO, figuring Ukraine would eventually fall into his lap.

How did things get this bad, this fast? 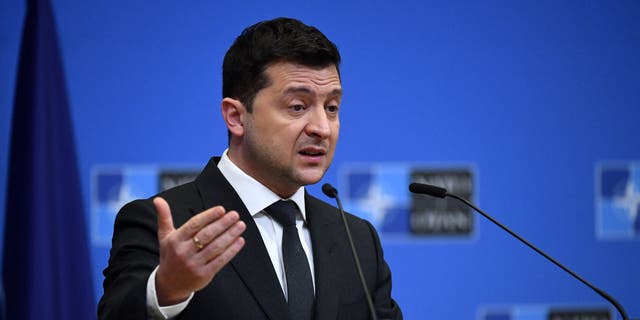 Ukrainian President Volodymyr Zelensky talks during a press conference with NATO Secretary General after their bilateral meeting at the European Union headquarters in Brussels on December 16, 2021.  (Photo by JOHN THYS/AFP via Getty Images)

It’s all about energy – ours and theirs.  A year ago, America had abundant, reliable, inexpensive supplies of oil and natural gas. We were a net energy exporter.  The Keystone Pipeline was ready to go operational and boost our already booming energy industry.  But President Biden cancelled the Keystone Pipeline and added piles of new regulations and penalties to stifle the American energy industry.

Predictably, America went from energy independence to once again being dependent on expensive imports. Predictably, the price of oil and gas skyrocketed and home and abroad.  A year ago, oil was $40 a barrel, today it is $80 a barrel.

The harsh reality is Putin could invade Ukraine anytime in the days or weeks ahead. He has moved 100,000 troops on the border, and pre-positioned supplies and equipment to support thousands more. His missiles are pointed to Kiev.

Americans now pay twice or three times as much for a gallon of gas as we did a year ago, sparking inflation and stifling economic growth. On the other hand, high energy prices have given energy exporter Russia windfall profits. 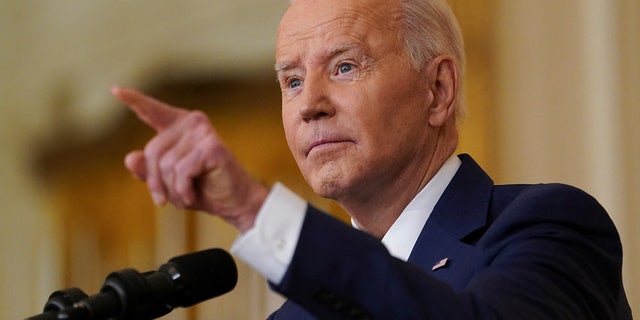 To make matters worse, Biden gave go-ahead for Russia’s Nord Stream 2 Pipeline. The European economy already depends on Russia for over a third of its energy needs.  Once the new pipeline is operational, those countries, especially Germany, won’t function without Russian natural gas to heat their homes and power their factories.  Russia will get even richer.

Today Europe is in the grips of an energy crisis, with shortages and skyrocketing prices. They are paying twice as much to heat their homes than they did last year.  Their leaders are unlikely to risk a disruption in energy imports – and their post-lockdown economic recovery – over a fight with Russia over Ukraine.

The new German Chancellor just declared a military option was off the table and refused to send lethal weapons to Ukraine. Germany’s message to Ukraine – you’re on your own.  Germany’s message to Putin – if you make a move on Ukraine we may complain, slap on a few sanctions, but we’re not willing to sacrifice much to keep Ukraine free.

Add to that Biden’s green light to Putin’s “minor incursions”. Putin now has a free hand and a lot of high cards to play.

The harsh reality is Putin could invade Ukraine anytime in the days or weeks ahead. He has moved 100,000 troops on the border, and pre-positioned supplies and equipment to support thousands more. His missiles are pointed to Kiev.

Or he could maintain limited, hybrid war for months, with untraceable cyberattacks, inexplicable gas pipeline outages, false flag operations, anonymous disinformation campaigns. When tanks move across a border, it’s clear who is the aggressor. But in hybrid warfare the aggressor leaves no obvious fingerprints. It would give Europe, especially Germany the excuse they want to do nothing.

Or he could choose to pocket for now his success in isolating Ukraine and keeping it out of NATO.  Putin has lots of options, and his decision is the only one that counts.  With Europe dependent on Russian energy, Moscow’s coffers flush with oil and gas revenues and an American president on the ropes, Putin holds all high cards.