“I am proud to endorse Jane Timken for the United States Senate. I saw firsthand Jane’s leadership skills when she served as the first female Chairman of the Ohio Republican Party (ORP) and delivered the State of Ohio for President Trump by substantial margins in 2020,” Noem said in a statement Tuesday that was shared first with Fox News.

“Jane is a trailblazer who fights to keep Ohio red and she has never backed down from a fight. I am confident that Jane Timken will be a leader with grit, perseverance, and integrity, exactly what is needed to fight for Ohio values in Washington, DC,” Noem emphasized. 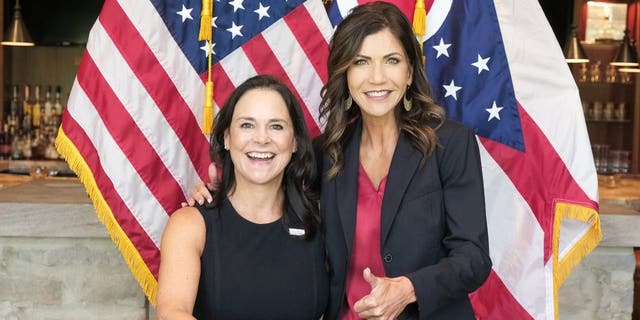 Noem, a close ally of former President Trump, is popular among many conservative voters across the country, and pundits see her as a potential 2024 GOP presidential contender if Trump doesn’t follow through on his flirtations with running again for the White House.

There’s been a full-court press by Timken and her leading rivals for the nomination to showcase their support and loyalty to the former president, who comfortably won Ohio in both his 2016 presidential victory and his 2020 reelection defeat.

Trump, who remains very popular with Republican voters and holds immense sway over GOP politicians more than six months removed from the White House, continues to play a kingmaker’s role in party politics.

The leading candidates each used the former president’s rally in late June in Lorain County, Ohio – Trump’s first since departing the White House – to affirm their commitment to his America First agenda. While endorsing in other 2022 GOP Senate primaries, the former president has remained neutral in the Ohio showdown.

Noem, who stressed that “we need more strong, driven, and experienced female leaders like Jane Timken,” becomes the first Republican governor to take sides in the race.

Richard Grenell, who served as ambassador to Germany and acting director of National Intelligence during the Trump administration, is supporting Cleveland businessman and luxury auto dealership giant Bernie Moreno. And J.D. Vance, the venture capitalist and the author of the bestselling memoir “Hillbilly Elegy,” who jumped into the race a month ago, enjoys the support of PayPal co-founder and billionaire venture capitalist Peter Thiel, who contributed $10 million of his own money to finance a pro-Vance super PAC.

Noem, in her statement, showcased that “I have known Jane for many years. She is a strong conservative who loves Ohio.  She puts America First, and is fiercely pro-life and pro-Second Amendment.”

And Timken noted that “as a fellow conservative woman, I am proud to have a fighter like Governor Noem in my corner.”

The former Ohio GOP chair’s campaign highlighted that Timken is the only candidate in the race with a statewide coalition in all 88 of Ohio’s counties, and touted “an army of 145+ grassroots endorsements from conservative leaders across the state.” The campaign also spotlighted its grassroots efforts, including 300,000 voter contacts and 100,000 doors knocked.

The winner of next year’s Republican primary will likely face off against longtime Democratic Rep. Tim Ryan of northeastern Ohio. Ryan, who declared his candidacy for the Senate in April, is considered the favorite for the Democratic nomination in a primary field expected to be much smaller than the large GOP roster of contenders.