A restaurant owner with locations in upstate New York and Florida says unemployment benefits have impacted the service staff shortages that restaurants and small businesses are seeing across the country.

Buddy Foy Jr., 50, owns two restaurants with his wife. One is in Bolton Landing, New York, and called The Chateau on The Lake. The other, The Chateau Anna Maria in Holmes Beach, Florida, opened in December amid COVID-19 and has seen booming business since Gov. Ron DeSantis reinstated work search requirements for Floridians seeking unemployment benefits.

THESE STATES ARE ENDING BOOSTED UNEMPLOYMENT BENEFITS AMID HIRING CONCERNS

The Chateau Anna Maria has received more job inquiries this week than it has had in five months since the governor's administration reinstated the search requirements Wednesday.

"Our staff's overwhelmed answering those phones, which is a good thing," Foy said. "We had zero inquiries for a job. We had 30 in the last seven days. Does it mean we're going to hire all of them? We have 15 jobs to sell. Are they all qualified? No. It means we're getting back to pre-pandemic conversations."

He added that the job search requirements will allow him to compete for labor with his competitors in the area. Every new hire represents 20 more customers his restaurant can serve on a given day.

"We want the government out of our competing space," Foy explained.

The restaurant owner added that he is also offering $250 bonuses to employees who recruit new workers who stay on for at least a month and said other businesses in the area are doing the same to stay competitive.

Florida Department of Economic Opportunity Secretary Dane Eagle said during a Wednesday press briefing that Florida will not be extending the job search requirement waiver and that the state's "Return to Work" program aims to fill 400,000 open positions.

Before Eagle's announcement, Foy said he was turning away 30% to 50% of customers on certain days when labor could not meet demand. On Mother's Day, for example, the restaurant received 600 reservation requests but could only accept 300.

"I have to manage my schedule on a day-to-day basis based on labor inventory," Foy said, adding later that he sees "the light at the end of the tunnel" in Florida after the governor's announcement.

President Biden's American Rescue plan included a $300-per-week unemployment-benefit extension through September of 2021 despite concerns from Republicans that the benefits may be holding Americans back from finding new employment opportunities.

"We’ll insist that the law is followed with respect to benefits, but we’re not going to turn our backs on our fellow Americans," Biden said Monday. "Twenty-two million people lost their jobs in this pandemic, through no fault of their own. For many of those folks, unemployment benefits are a lifeline."

Eagle told reporters on Wednesday that suspending federal unemployment benefits early, as some states have already done, in Florida is not "completely off the table," but Florida is "focused on this Return to Work initiative" for now.

But Foy said keeping his restaurant open for dinner while the curfew is still intact was not worth it with capacity requirements and staff shortages impacting the number of customers the restaurant could serve for just several hours a day. 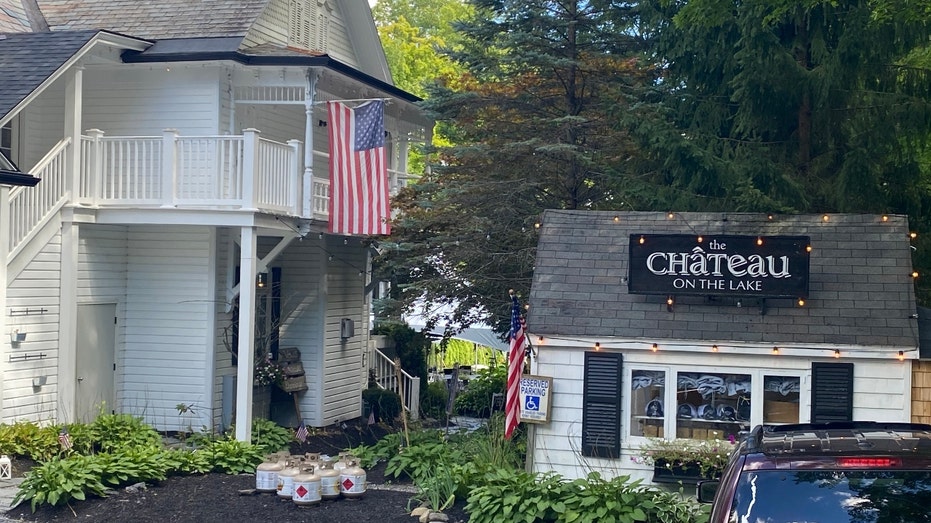 The Chateau on the Lake (Credit: Buddy Foy)

The Chateau on the Lake will open in time for Memorial Day, he said, but is planning on bringing some staff from his Florida location up to New York to help staff the restaurant while it reopens just as his New York employees helped him open The Chateau Anna Maria.

"In the beginning, it was tough because it was a new learned behavior," Foy said of the early days of COVID-19. "I was struggling with being shut down or being controlled at the level New York wanted to control us at. I understand the fear, but statistics are supposed to be our rational checkpoint."

Foy spent "six figures" on outdoor dining equipment, excavation and other necessities to implement outdoor dining at his New York location, which did well over the summer. The New York Times reported Tuesday, however, that "there is not a single documented COVID infection anywhere in the world from casual outdoor interactions, such as walking past someone on a street or eating at a nearby table."

"It's sad. The money we spent," Foy said. "…It would have been nice to have some data on our side to support us."

The Labor Department reported on Friday that employers added just 266,000 jobs last month, well below the consensus 1 million forecast by most economists, suggesting that people are not applying to jobs as quickly as business owners anticipated.

Secretary of Commerce Gina Raimondo on Sunday dismissed claims that the unemployment benefit extension impacted the most recent jobs report, citing COVID-19 fears instead, and suggested that governors in different states do what is best for their respective labor markets.

"This is regional, and it's appropriate that governors in different regions would respond to what's going on in their regional labor market. But if you look nationally, wages aren't going up," Raimondo said. "People are still telling us the number one reason they're not going back to work is fear due to the virus. And more people were looking for work last month than the month before."