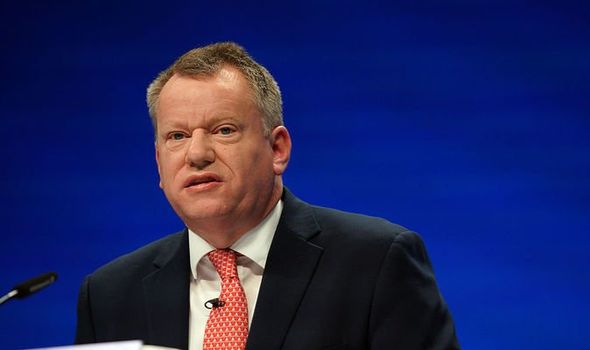 The peer enraged Ireland’s foreign minister Simon Coveney over a call he will make tomorrow to end the role of European courts in Northern Ireland.

Mr Coveney accused Lord Frost of trying to force “a breakdown in relations” with the EU.

The row comes as Brussels is poised to offer “very far-reaching” plans to resolve issues stemming from the Northern Ireland Protocol – drawn up to prevent a hard Irish border.

Under the agreement, the province follows some EU rules, including a ban on sausages and other chilled meats entering from Great Britain.

But Mr Coveney tweeted that while Brussels was working “seriously” to resolve practical post-Brexit issues, the UK was imposing a new “red line” it knew the bloc “can’t move on”.

He questioned whether the UK wanted an “agreed way forward or a further breakdown in relations”.

Yesterday Lord Frost said the UK’s demands over the European Court of Justice (ECJ) was not new and had been set out three months ago.

He added: “The problem is that too few people seem to have listened.”

Lord Frost said the Government would this week look at the EU’s proposals “seriously and positively, whatever they say”.

He added: “We will discuss them seriously and intensively. But there needs to be significant change to the current situation if there is to be a positive outcome.”

But he warned they carried a “political risk” because of threats by the UK to trigger Article 16, which would override much of the protocol.

Mr Sefcovic also ruled out axing the ECJ’s role. He said: “To be quite honest, I find it hard to see how Northern Ireland would stay or keep access to the single market without oversight [of the court].”

He added: “Do we want to deprive the people of Northern Ireland of this tremendous opportunity, this huge advantage? Do we want to do that?”