A joint session of Congress led by Vice President Mike Pence to oversee the counting of slates of presidential electors descended into chaos when throngs on violent protesters descended on the US Captiol.

The protesters, which breached both the House and Senate chambers as lawmakers were debating an objection to Arizona's electoral votes, forced both chambers to go into recess and lawmakers to take shelter.

In response to the violence, Washington, DC mayor Muriel Bowser ordered a 6 p.m. curfew in the District of Columbia.

The event, which in most years is simply a procedural formality, holds particular significance in 2021 in further affirming President-elect Joe Biden's victory in the presidential race after outgoing President Donald Trump and his allies spent two months attempting to overturn the 2020 election results.

Dozens of House lawmakers and 13 Republican Senators, as of Wednesday, were planning on raising objections to counting at least one and possibly multiple slates of electors under the Electoral Count Act of 1887, which permits lawmakers to raise objections to specific states' electors.

Politico reported on Tuesday that lawmakers from both chambers have garnered the most support for objections to slates of Biden electors from Arizona, Georgia, and Pennsylvania, with challenges to other states still on the table.

One member of the House and one member of the Senate must raise an objection for both chambers of Congress to separately debate for a maximum of two hours and vote on whether to accept the electors. Both chambers must each vote by simple majority to reject it.

Democrats control the House and Republicans temporarily hold a narrow majority in the Senate. With 20 GOP senators publicly stating that they support the Electoral College results and do not plan to object to electoral votes, any challenges are virtually guaranteed to fail.

Follow along for live updates and watch the proceedings below:

Both chambers of the Capitol were forced to go into recess as the House and Senate separately debated an objection to Arizona's 11 Electoral Votes.

Lawmakers were forced to shelter in place.

Capitol police reportedly deployed flash bang grenades and tear gas to disperse pro-Trump protesters outside the Capitol building, according to a Fox News camera crew on the scene. 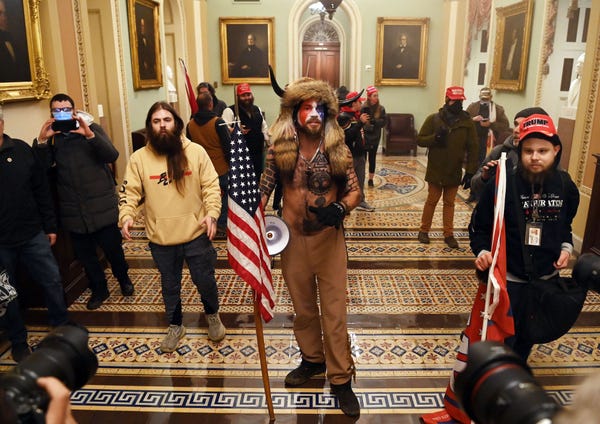 As the chambers began debating the Arizona objection, pro-Trump protesters clashed with Capitol Police on the steps of Capitol Hill.

Staffers were ordered to evacuate from two House office buildings, the Cannon and Madison buildings.

Senate Majority Leader Mitch McConnell spoke out against Trump's efforts to overturn the election results as the Senate began to debate.

"I've served 36 years in the Senate," McConnell said. "This will be the most important vote I'll ever cast."

He continued: "We cannot simply declare ourselves the national board of elections on steroids."

McConnell concluded his speech with a call for both parties to return to a shared set of facts.

"We cannot keep drifting apart into two separate tribes with a separate set of facts and separate realities, with nothing in common except for our hostility toward each other and mistrust for the few national institutions that we all still share," he said.

"As we speak, the eyes of the world are on this chamber, questioning whether America is still the shining example of democracy, the shining city on the hill, " Schumer said.

Right after the House and Senate split off to their respective chambers to debate the Arizona objection, House Speaker Nancy Pelosi admonished Republican colleagues for failing to adhere to social distancing guidelines.

Rep. Paul Gosar rose to bring an objection to the third state in the alphabetical order, Arizona, with 60 of his colleagues.

Lawmakers reacted with a mix of groans and applause.

They then left the chamber to go debate separately from the House on the objection.

The first two certificates of the process from Alabama and Alaska were accepted without controversy or objection.

At 1 p.m. local time, members of Congress filed into the House chamber for the proceedings. Speaker Nancy Pelosi and Vice President Mike Pence called the proceedings to order.