“The threat that I believe President Trump poses to our national security and where we are as a country is extreme, and I don’t think we can afford to ignore it,” the frontrunner in the Democratic presidential race said at the City University of New York. “His erratic policies and failure to uphold basic democratic principles have muddled our reputation and our place in the world.”

Biden positioned himself as the candidate with the international experience necessary to return the U.S. to its previous standing. He committed to reversing Trump-era policies, including the ban on travelers from several predominantly Muslim countries and the separation of families of undocumented immigrants at the U.S. border.

He also said he would recommit the U.S. to the 2015 Paris accord on climate change and to the international agreement to limit Iran’s nuclear program if the Islamic Republic again agrees to comply with the pact’s restrictions.

As part of the Biden appearance his campaign released a seven-page document that further detailed ways Biden plans to “repair the damage wrought by” Trump and “chart a fundamentally different course,” which included ending the president’s “detrimental asylum policies and raise our target for refugee admissions.”

As part of an attempt to improve the country’s relationships with other democracies, Biden said that early in his presidency he would host a “global summit for democracy to renew the spirit and shared purpose of the nations of the Free World.”

“Donald Trump’s brand of ‘America first’ has too often led to ‘America alone,’” he said.

Overall, his address fit the mold of much of his campaign in prizing convention and a vision of past U.S. glory over the kind of sweeping and ambitious change some of his rivals for his party’s presidential nomination are pitching.

“We are the United States of America and we do not coddle dictators,” he said. Although that’s a sentence that seems like a perfect rhetorical foil to Trump’s embrace of strongmen from Pyongyang to Riyadh, it’s also a reminder of how contested the U.S.’s legacy on democracy abroad is, given Washington’s decades of assistance ― including during Biden’s time in public life ―for various tyrannical regimes.

Biden himself was frequently involved in managing close American relationships with leaders who blatantly violate human rights norms, like the rulers of U.S.-allied monarchies in the Persian Gulf and President Recep Tayyip Erdogan of Turkey.

The candidate’s tendency to avoid culpability or introspection for unappetizing moments in American foreign policy was also on display when he spoke about the U.S. role in the brutal campaign that Saudi Arabia and its allies have waged in Yemen. He confirmed that he would end America’s support for the effort that the United Nations says has created the worst humanitarian crisis in the world ― but he didn’t mention that the policy was initiated during what his campaign calls the Obama-Biden administration.

And beyond claiming credit for the Obama-era campaign against the Islamic State group, Biden didn’t talk about Iraq or the 2003 invasion of the country, a decision that as a senator he supported and a flashpoint in the primary campaign. His own record of proposals slammed by Iraqis and outside experts and linked to the rise of ISIS went similarly ignored. (Biden briefly addressed recent criticism of his Iraq war vote last weekend.)

He did offer and expand on the familiar argument that strong foreign policy is rooted in solid domestic policy. He etched a plan to create a “foreign policy for the middle class” through a series of steps to make the U.S. more economically equitable, including affordable health care, a $15 minimum wage, a focus on voting rights and support for jobs in the renewable energy sector. 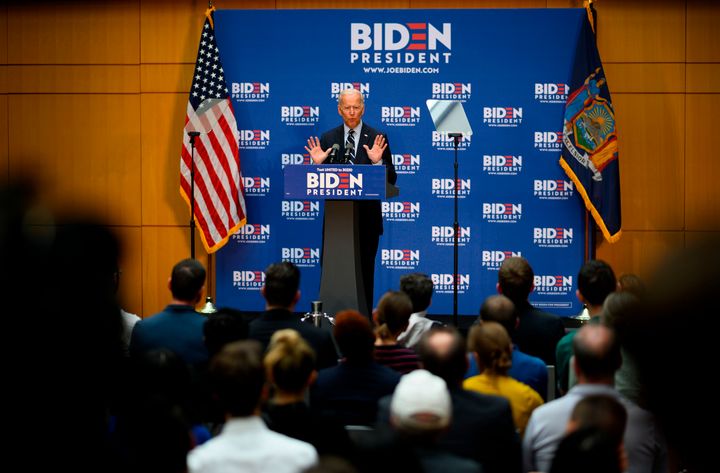 Biden also pledged to follow through on some less lofty but high-profile goals, like bringing back daily press briefings at the White House and State Department and the words “nation of immigrants” to the mission statement of  U.S. Citizenship and Immigration Services.

Where Biden did talk about changing course, he sometimes skimped on detail. Trying to reboot the Iran deal after the Trump years will, for instance, be a herculean task that some analysts believe is already impossible ― and it’s entirely possible that by 2021, the next president will need to offer a totally new roadmap on handling the Islamic Republic.

His plan for countering China was similarly vague. He made clear he does not support tariffs, but didn’t explain what he might do instead to change behavior by Beijing that business and rights groups find troubling. Nor did he specify how his call to rally U.S. partners to balance Chinese power would differ from Obama-era ideas, one of which, a major trade deal,  he now won’t commit to supporting.

On the question of Israel’s dispute with the Palestinians, Biden said he would keep U.S. support for Israeli security “ironclad” regardless of disagreements with Israeli Prime Minister Benjamin Netanyahu, whose open racism and hardline policies have made him anathema to many Democrats. As other contenders and even former officials steeped in establishment thinking talk about new measures to push Netanyahu to keep alive the possibility of a settlement and a state of Palestine, Biden appears out of touch.

The Biden campaign has been trying to recover momentum since he was widely seen to have stumbled during last month’s debate among Democratic presidential contenders. Sen. Kamala Harris of California won plaudits for confronting Biden over his past opposition to forced busing to integrate schools and comments about having a working relationship in the Senate decades ago with two well-known segregations, James O. Eastland of Mississippi and Herman Talmadge of Georgia.

Be honest Nicola! Sturgeon urged to be open about challenges of Scottish Independence