A Michigan state lawmaker who was arrested earlier this month following a suspected DUI crash refused to have his booking photo taken, arguing that officers weren’t following state coronavirus guidelines, video shows, according to a report.

State Rep. Jewell Jones, a Democrat who was taken into custody April 6 after crashing his SUV, warned authorities that “Big Gretch” – aka Gov. Gretchen Whitmer – would be coming after them if they didn’t allow him to wear a face mask for the photo, FOX 2 of Detroit reported.

“You know what? Big Gretch is the homie,” Jones said, according to a video obtained by FOX 2. “When she finds out about this, she might be a little upset about the treatment. She’s very serious about the pandemic so I’m just wondering if I can wear the mask.”

“Big Gretch is the homie. When she finds out about this, she might be a little upset about the treatment.” 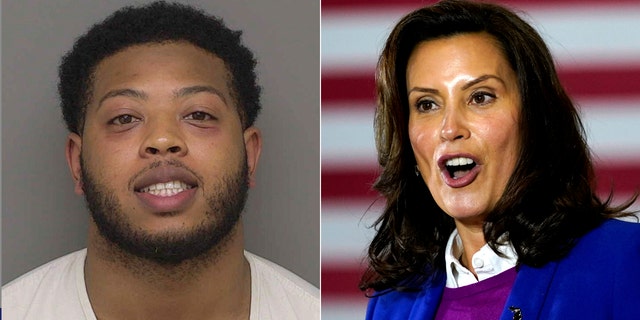 During the exchange, a sheriff’s officer informs Jones that the governor already “knows about this,” referring to Jones’ arrest, and advises Jones to start complying with instructions.

Footage recorded later shows Jones sitting on the floor of his cell, again refusing to have his photo and fingerprints taken, FOX 2 reported.

Jones has been charged with resisting and obstructing, operating a vehicle with a high blood alcohol content, operating while intoxicated, reckless driving, and possession of a weapon while under the influence of alcohol, according to the station.

Authorities have said his blood alcohol level was twice the legal limit following the crash.

When responding officers arrived at the crash scene, Jones and a female passenger were both found with their pants partially down, the Michigan Information & Research Service said in a report, according to FOX 2.

Jones also invoked Whitmer’s name at the time of his arrest, the station reported.

“I run y’alls’ budget,” Jones told state troopers, according to FOX 2. “When I call Gretchen, I’ll need y’all IDs and badge numbers, everything.”

“I run y’alls’ budget. When I call Gretchen, I’ll need y’all IDs and badge numbers, everything.”

The female passenger was transported to a hospital after being found unable to stand and after having vomited, the report said. Her current condition was unclear.

Authorities say Jones clashed with state troopers and had to be subdued with a stun gun and pepper spray, the report said. His lawyer is now arguing that excessive force was used on the lawmaker.

“Clearly he’s overcharged. Clearly, police abused their discretion here and they used excessive force on Mr. Jones,” attorney Ali Hammoud told FOX 2, asserting that race was a factor in the lawmaker’s treatment by the officers.

Jones, a member of the Michigan National Guard, is in his third term representing the 11th District, which includes Garden City, Inkster and parts of three other communities.