Senator Elizabeth Warren of Massachusetts, who has risen in the Democratic presidential primary on her pledge to forgo traditional big-money fund-raisers, said this week that if she became the nominee she would continue to skip such events, a reversal of what her position has been throughout 2019.

From the day Ms. Warren announced her plan to skip traditional fund-raisers in February, she had said the pledge only applied to the primary. “I do not believe in unilateral disarmament,” she said then on MSNBC.

But she told CBS News in an interview posted on Tuesday evening that, even as President Trump has set fund-raising records, she would not change how her campaign raises money if she won the Democratic nomination.

“No, I will not be forced to make changes in how I raise money,” Ms Warren said. “Look, for me this is pretty straightforward. Either you think democracy works and electing a president is all about going behind closed doors with bazillionaires and corporate executives and lobbyists and scooping up as much money as possible. Or you think it’s about a grass-roots, let’s build this from the ground up.”

After her initial response, CBS’s Zak Hudak asked if that was Ms. Warren’s position “no matter how much money Donald Trump is raising.”

“Yeah I’m not going to do the big-dollar fund-raisers. I’m just not going to do it,” Ms. Warren said. “The whole notion behind this campaign is that we can build this together. And that’s exactly what we’re doing.”

Powered by small donors, Ms. Warren has become one of the strongest Democratic fund-raisers of the 2020 field, raising $24.6 million in the last three months from more than 940,000 donations, second only to Senator Bernie Sanders of Vermont, who raised $25.3 million.

Ms. Warren has steadily risen in the polls throughout the year and has recently begun to top former Vice President Joseph R. Biden Jr. in some surveys both nationally and in the early-voting states of Iowa and New Hampshire. 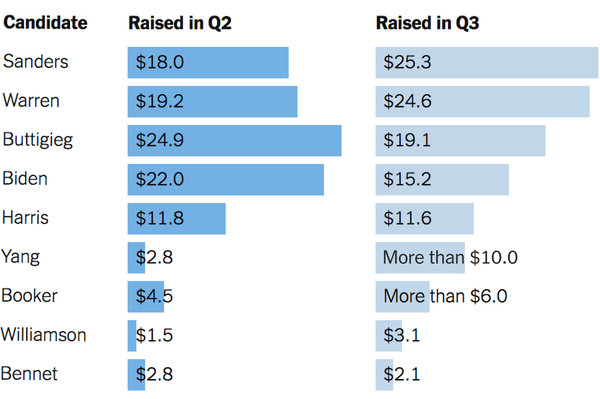 Which 2020 Democrats Raised the Most Money This Summer?

Ms. Warren’s campaign said in a statement that her position was not a reversal but “a clarification since the original version was a little vague.” The campaign said that she would ensure state and national parties “have the resources they need,” if nominated. Ms. Warren headlined a Democratic National Committee event in August, but she did not meet privately with large donors who attended. She is scheduled for another upcoming D.N.C. event.

Previously, Ms. Warren had been clear that her pledge applied only to the primary. MSNBC’s Chris Hayes asked her that directly when she announced it (“Yes,” Ms. Warren replied). And in an interview with The New York Times over the summer, Ms. Warren said, “It’s primaries. This is Democrat against Democrat. I don’t believe in unilateral disarmament.”

Some of Ms. Warren’s rivals have privately grumbled about the inconsistency of her skipping fund-raisers during the primary while bringing $10 million into her presidential campaign in leftover Senate funds and then saying she would restart such events if nominated. But no one has confronted her directly.

Ms. Warren is one of two Democrats to skip traditional fund-raising events in the primary where candidates collect checks of up to $2,800. The other, Mr. Sanders, has said he would also refuse such events if nominated, a contrast his aides and allies have highlighted.

The move could also appeal to more fervent supporters of Mr. Sanders, whose base Ms. Warren has been seeking to win over.

Ms. Warren’s previous willingness to do such events as the nominee had been something of an olive branch extended to a Democratic establishment that remains wary of her insurgent-style candidacy. In a general election, donors can give as much as $300,000 per person at events for the nominee and the D.N.C.

Shane Goldmacher is a national political reporter and was previously the chief political correspondent for the Metro Desk. Before joining The Times, he worked at Politico, where he covered national Republican politics and the 2016 presidential campaign. @ShaneGoldmacher

Brian Lonergan: Immigration is unquestionably a national security issue. We need to start treating it like one
Technology

Ethereum Moves up After a Breakdown

Singer Akon given go-ahead to build ‘crypto city’ in Africa