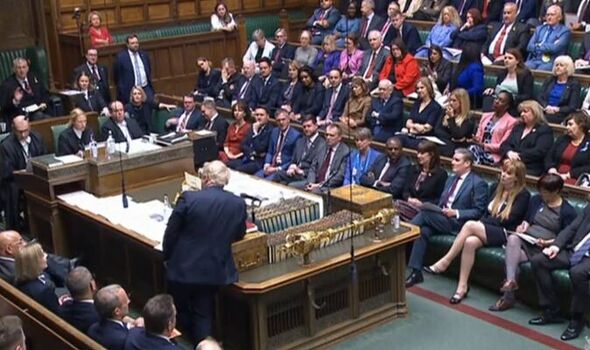 Two female MPs complained about the sleazy male Conservative MP, who has not been publicly identified.

One told a meeting on Tuesday called to discuss sexism and misogyny in Parliament she had sat next to him while he brazenly looked at the X-rated images. The other MP corroborated her story.

He was accused of doing the same thing on other occasions and during a Commons committee hearing.

A statement from the Conservative whips’ office said: “The Chief Whip is looking into this matter. This behaviour is wholly unacceptable and action will be taken.”

She said: “They should go. That will mean their ministerial career is absolutely shot, and their ­parliamentary career probably. It’s just not excusable in any way. It’s totally shocking.

“I just think there’s no place for it in any workplace. In Parliament, we are supposed to be leaders, and we should be setting a really good example.

“If people get moved on, they move on, out of the way. There are very talented people who can take their place, so it’s not a case of not having the talent to replace them.

“It’s a case of having the will to replace them, to make sure that we change the culture.

“We don’t want this in Parliament, where we are supposed to be leaders of the country.”

The standards ­committee is reviewing the MP code of conduct.

Anna McMorrin, another Labour MP, said: “It’s absolutely disgraceful. It just shows how far we have to go to tackle what is going on, the sexism and misogyny.

“We need to see more being done to address this. I mean, what can you say about this?

“This is just an absolute disgrace, that that would actually happen in the House of Commons.

“And things like making misogyny a hate crime would go a long way to doing that.

“We need to see the Government tackling that. This is not about the distraction of freedom of speech.

“This is about making sure that we don’t have sexism, misogyny in our society.

“We want the girls to be coming through seeing that, actually, politics is a place for them, or they can be in the workplace without facing sexism.”

He said: “In any workplace, I believe you’d face a significant sanction from behaving that way. I think they should be treated in exactly the same way. I hope the Conservatives are taking this seriously.” The ­outrage follows a furious row about sexism, misogyny and snobbery at Westminster.

At the weekend, it was said three Cabinet ministers and two shadow cabinet ministers were among 56 MPs who have been referred to the Independent Complaints and Grievance Scheme over about 70 separate complaints.

“I’ve been deeply frustrated by our failure to deal with it.

Mr Johnson’s aides insisted the Tory Party did not have a problem with misogyny and sexism. The Prime Minister’s press secretary said: “You will have heard the Prime Minister address this explicitly in Parliament today and over the last few days, saying there is absolutely no place for such behaviour and this cannot be tolerated in any workplace.”

Asked whether watching pornography at work was a sackable offence, she said: “I am not aware of the disciplinary action. Obviously, it is wholly unacceptable behaviour and it is being looked into.”

Downing Street aides declined to be drawn on separate reports three Cabinet ministers are under investigation over sexual misconduct claims.

The Prime Minister’s press ­secretary added: “On this, we ­obviously take all such allegations extremely seriously but there is an independent process in place and it is right not to speak on its behalf.” Labour chiefs said watching pornography in the House of Commons chamber was a “sackable offence”.

Asked if leader Sir Keir Starmer had any views on the matter, a party spokesman said: “Yeah – it’s a sackable offence.”

She said: “Can he now confirm that he considers sexual ­
harassment – unlike, apparently, bullying and lying – to be grounds for dismissal under the ministerial code?”

Mr Johnson replied: “Of course, sexual harassment is intolerable, and it is quite right that members should now have a procedure whereby they can bring it to the attention of the House authorities.

“I think that that is a good thing, and of course sexual harassment is grounds for dismissal.”

For a male MP to do so on his smartphone in front of female colleagues in the House of Commons chamber – possibly on multiple occasions – beggars belief. But that is what one Conservative MP has been accused of doing by female colleagues.

If the unnamed MP is indeed guilty of such behaviour he should clearly not stand for re-election and it would best for all concerned if he stood down early. Watching sexually explicit video footage in the chamber is almost certainly also against the House’s own rules of conduct for members and could therefore prompt a formal disciplinary inquiry followed by severe sanctions, if proven to have happened.

After a string of scandals over the personal conduct of MPs – including his own role in the “Partygate” affair – such sleazy tales are the last thing Boris Johnson needs further tarnishing the image of his party.

Despite a jury reaching a guilty verdict after hearing all the evidence, Khan’s Tory colleague Crispin Blunt then publicly condemned the conviction of his friend despite only having attended the trial during the case for the defence. Khan is to stand down, prompting a by-election in a highly marginal seat, while Blunt was forced to apologise for his remarks.

Khan’s criminal conviction followed hard on the heels of claims that married Conservative backbencher David Warburton had snorted cocaine and groped a woman.

And no fewer than three male Cabinet ministers are also understood to be facing claims from female colleagues of having made unwanted advances.

It all recalls the Tory sleaze scandals which were uncovered in the wake of John Major’s moralistic “back to basics” speech in the mid-1990s and which played a significant role in the Conservatives’ landslide defeat in 1997.

Though Labour also has its own problems with appalling behaviour from some MPs, scandals involving parliamentarians belonging to the governing party always make for bigger headlines.

Given that a living standards squeeze is in full swing, voters are not likely to be in a forgiving mood when presented with evidence of misdeeds by their elected representatives.

So the Prime Minister – not by nature a disciplinarian figure – simply has to get a grip or he will be giving extra ammunition to Labour during a very difficult period for the Government. Loyal Tory voters out in the country will be forgiven for thinking they deserve very much better than this.