“Madame Speaker, Madame Vice President,” Biden began his speech, gesturing to the women behind him. “No president has ever said those words from this podium, and it’s about time.”

Harris has already made history during Biden’s presidency by becoming the first Black person, Indian American and woman to hold the position of the vice presidency.

“It says a lot about a country, and a lot about Joe Biden, and it says certainly a lot about both women who have made it to that place. It’s going to be very emotional for me,” former Sen. Barbara Boxer (D-Calif.), who once served alongside Pelosi in the House and whose Senate seat Harris filled when she retired, told CBS. 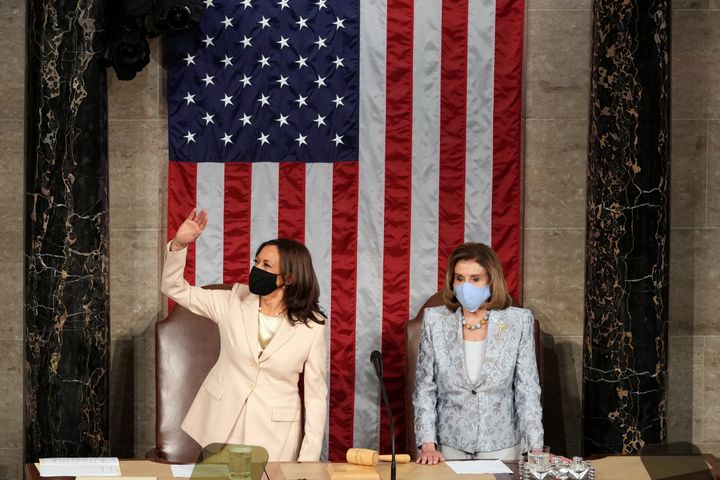 Both Pelosi and Harris grew their political careers in California’s Bay Area, and knocked down systemic barriers meant to prevent women ― particularly women of color ― from rising in the ranks. Pelosi grew up with a father and brother who both served as Baltimore’s mayor, and a mother who stayed politically active by organizing Democratic women.

Harris, whose political experiences were also shaped by her upbringing, was the daughter of Indian and Jamaican civil rights activists who met each other while out protesting. The vice president has repeatedly said that her mother would often tell her: “You may be the first to do many things. Make sure you’re not the last.”

Earlier Wednesday, Pelosi told MSNBC’s Andrea Mitchell that the historic nature of two women sitting in their respective positions for the speech is “pretty exciting.”

“It’s wonderful to make history. It’s about time,” she told Mitchell. “I made history when I was the first speaker to be standing behind President [George W.] Bush. And he made note of that. Now this is just so exciting.”

The California Democrat served as speaker from 2007 to 2011, and then again in 2019 when Democrats regained control of the House. Republicans John Boehner and Paul Ryan served in the position between Pelosi’s speakership.

“For our daughters and granddaughters, today we have broken the marble ceiling,” she said when elected speaker for the first time in 2007. “Now the sky is the limit. Anything is possible.”

About 200 people attended Biden’s congressional speech ― largely due to the pandemic ― a change from the usual 1,600 people who are present for the event. It’s also the first time in several years that the president, vice president and speaker all belong to the same political party.