California Gov. Gavin Newsom asked residents on Thursday to voluntarily cut back on their water usage this summer amid the drought and high temperatures, according to reports.

“We’re hopeful that people will take that mindset they brought into the last drought and extend that forward with a 15% voluntary reduction, not only on residences but industrial commercial operations and agricultural operations,” Newsom said in a news conference, according to The Los Angeles Times.

With his recall election two months away, the governor has so far refrained from mandating water restrictions.

Newsom also expanded the regional state of emergency to nearly half of the state, according to the newspaper.

He suggested watering the lawn less, taking shorter showers and fixing leaks. “We’re not trying to be oppressive,” Newsom stressed, The Times reported. “Again, these are voluntary standards.” 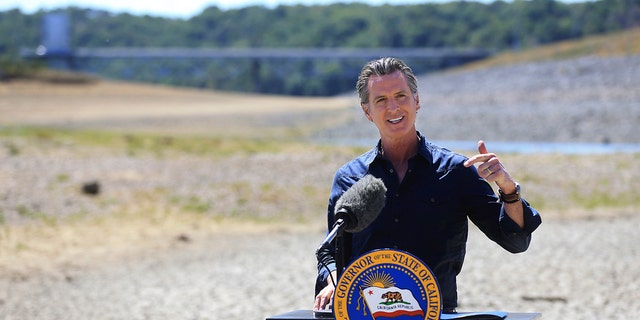 FILE — In this April 21, 2021, file photo California Gov. Gavin Newsom speaks at a news conference in the parched basin of Lake Mendocino in Ukiah, Calif., where he announced he would proclaim a drought emergency for Mendocino and Sonoma counties. On Thursday July 8, 2021, Newsom asked people to voluntarily reduce their water use by 15% in the middle of the drought. He also added nine more counties to the state’s emergency proclamation. (Kent Porter/The Press Democrat via AP, File)

The Sept. 14 recall became official earlier this summer after elections officials confirmed the required number of signatures on the recall petition.

Newsom would be recalled if more than 50% of voters casting ballots in the fall say they’d like him replaced and the challenger with the most votes would take over as governor.

The recall was prompted by Republicans and other critics of Newsom’s pandemic restrictions and will be the second in the state’s history following 2003 when former Gov. Arnold Schwarzenegger was elected.

“This is jaw-dropping, what’s happening in the West Coast of the United States,” Newsom said Thursday at Lopez Lake, a reservoir in San Luis Obispo County formed by a dam on the Arroyo Grande Creek that is at 34% capacity.

The historic drought tied to climate change is gripping the U.S. West and comes just a few years after California declared its last dry spell over in 2016. The earlier drought in California depleted groundwater supplies and changed how people use water, with many people and businesses ripping out landscaping and replacing it with more drought-tolerant plants.