A majority of registered voters oppose the payments of up to $450,000 the government is reportedly considering to compensate family members separated at the southern border under former President Trump’s “zero tolerance” policy for entering the U.S. illegally.

That’s according to the latest Fox News Poll released Friday.

The Wall Street Journal first reported in late October that the Justice Department, Homeland Security, and Health and Human Services are considering the payments in response to lawsuits brought by civil rights groups on behalf of the roughly 5,500 parents and children who say they have psychological trauma from the separations, some of which lasted for an extended period.

As of this writing, no settlements have been made and the details surrounding the amount of the potential payouts are still being determined.

But more than 6-in-10 oppose it, including 49 percent who are against giving separated families any compensation at all and another 12 percent who say it should be a lesser amount. 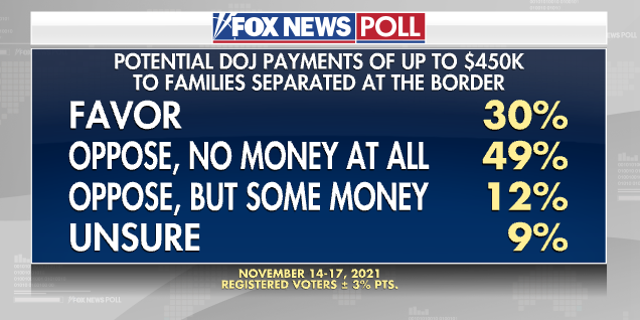 While 54 percent of Black voters favor the plan, 66 percent of White voters oppose the payments either outright (55 percent) or oppose but think families should at least receive some money (11 percent).

Hispanic voters split: 48 percent favor vs. 44 percent fully oppose or oppose but open to some compensation. 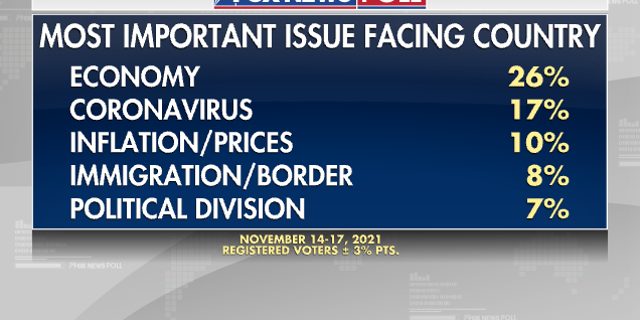 Partisanship affects perceived problems.  The economy tops the list for Republicans, followed by inflation and immigration/border security.  Among Democrats, immigration barely makes it into the top ten, as they put coronavirus first, followed by the economy and climate change.

Conducted November 14-17, 2021 under the joint direction of Beacon Research (D) and Shaw & Company Research (R), this Fox News Poll includes interviews with 1,003 registered voters nationwide who were randomly selected from a national voter file and spoke with live interviewers on both landlines and cellphones. The total sample has a margin of sampling error of plus or minus three percentage points.