Starting Jan. 1, employers will no longer have to give workers with COVID-19, or those taking care of someone with the virus, two weeks of paid leave.

Congress is letting the coronavirus paid leave guarantee expire at the end of the month without an extension. The $900 billion relief package Congress passed late Monday does extend tax credits for employers offering paid leave until March. That means the federal government will pay for paid sick leave for another three months, but businesses are no longer required to offer it.

In March, Congress guaranteed workers up to two weeks of fully paid sick leave if they contract COVID-19. The program also mandates two weeks of paid leave for those caring for someone required to quarantine, and 10 weeks of emergency child care leave if schools or child care facilities are shut down, paid out at two-thirds of a worker’s regular salary. Employers were given a refundable tax credit to cover the costs of paying out paid sick leave.

Democrats, hoping to extend the mandate for paid leave into the new year as COVID-19 cases continue to rise across the country, found an ally in Treasury Secretary Steve Mnuchin, who had negotiated the existing policy with Pelosi in March. But Senate Majority Leader Mitch McConnell (R-Ky.) was said to be the biggest obstacle, as Buzzfeed News first reported, alongside Sen. Lamar Alexander (R-Tenn.), the retiring chair of Senate Health, Education, Labor and Pensions Committee and a close confidant of McConnell’s. Two sources confirmed to HuffPost that McConnell was the primary legislator who blocked the extension, with assistance from Alexander. Their offices did not respond to requests for comment.

Mnuchin told Pelosi that Republicans felt renewing the mandate would put the policy on a path to permanency, which they wanted to block, according to one senior Democratic aide who spoke on the condition of anonymity to relay the private conversations. Republicans were generally reluctant toward any “new mandates on business,” another Democratic aide said.

Alexander’s opposition to the mandate is slightly more nuanced; in a statement to Buzzfeed, Alexander said requiring paid leave has put undue financial burden on state and local governments that are not eligible for reimbursement from the federal government but are still required to guarantee leave. This is a snag in the program that could be solved with more funding for state and local governments, but Republicans were vehemently opposed to that in negotiations as well.

Republican opposition to comprehensive paid leave isn’t so isolated, however. GOP senators have been on the record criticizing the paid leave mandate since its passage in March, calling it too burdensome on small businesses that would have to wait too long to receive their tax credits.

“Although mandating that all employers must pay for sick leave might sound good, we need to consider the unintended consequences of this legislation,” Sen. Ron Johnson (R-Wis.) said in a statement in March. “I fear that rather than offering a workable solution, the House bill will exacerbate the problem by forcing small businesses to pay wages they cannot afford and ‘helping’ them go further into debt.” 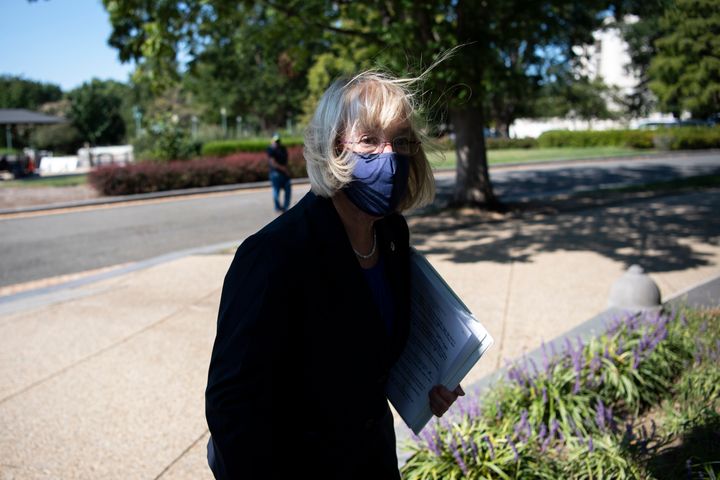 Ultimately, Democrats conceded on the issue.

“Businesses can use these tax credits to provide paid sick days to their workers, and I hope they do—but it’s not nearly enough,” said Sen. Patty Murray (D-Wash.), the top Democrat on the HELP committee, adding that she would be fighting for the provision once President-elect Joe Biden comes into office. “This crisis has made it clearer than ever why paid leave for every worker is so important to families, communities, and our economy as a whole.”

As it currently stands, the coronavirus paid leave mandate already leaves out a lot of workers; the mandate excludes companies with more than 500 employees, cutting out millions of front-line workers, like those at big grocery store chains. Now, the program is getting even weaker as a voluntary program employers can opt into until March.

“I worry that working people with employers who are unwilling to provide paid leave won’t be able to quarantine or care for their children when they need to. This approach puts all power in employers’ hands,” Vicki Shabo, a senior fellow at New America and expert in paid leave, tweeted this week.

Mandating paid leave has shown to be an effective public health measure. As HuffPost’s Emily Peck wrote, a recent study found emergency paid leave can be attributed to preventing 400 coronavirus cases per day per state, or 15,000 cases per day in the United States.

Paid leave activists have already spoken out against the omission in the final bill.

“The reason it falls short: the Senate majority leader favored partisan politics and corporate meal deductions over working people’s lives and livelihood,” Wendy Chun-Hoon, executive director of Family Values @ Work, a grassroots group that advocates for paid leave, said in a statement about the relief package. “Relying on the voluntary action of employers has left the U.S. as an outlier in the world and contributed to the disastrous spread of this pandemic.”

With both Bitcoin price and DeFi’s total value locked reaching all-time highs, is it possible to draw parallels between the two? Source: Read Full Article

Bitcoin has been booming as of late, but according to one investor – who wishes to remain anonymous – this isn’t the best time to...

One measure shows the stock market is still affordable at current levels – but investors should avoid these 3 bubble-like pockets, Goldman Sachs says

Blockchain’s further success is contingent on the establishment of a strong free market and positive competition. Source: Read Full Article

One measure shows the stock market is still affordable at current levels – but investors should avoid these 3 bubble-like pockets, Goldman Sachs says