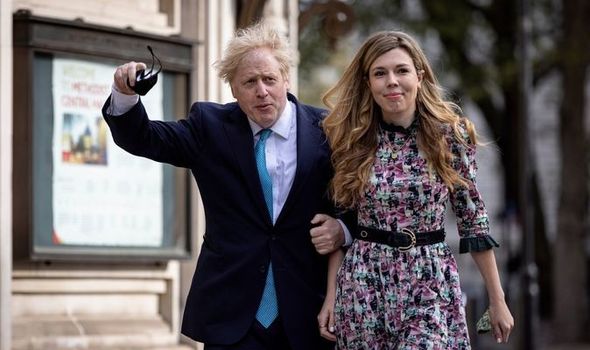 In his question and answer session on his blog, Mr Cummings also branded Mr Johnson a “shambles” and accused Mrs Johnson of “insane advice” and “screaming”.

He said Mrs Johnson, 33, who gave birth to the couple’s second child on Thursday, “wants to control the country via him”.

Cummings was kicked out of No10 last year following a confrontation with Mr Johnson and claims he briefed against Carrie, who his allies were alleged to have called “Princess Nut Nut”.

In the blog, where he urged subscribers to “ask me anything”, he said of Boris, 57: “He’s a shambles but the shambles has been made worse by hooking up with a wrong ‘un [Carrie] who wants to control the country via him.

“He got a wrong ‘un pregnant, listened to her insane advice/screaming, and went into a flat spin.”

Cummings, inset, has previously launched attacks on Carrie, calling her a “crazy girlfriend” and claiming that the Prime Minister asked him to find her a Government job with “lots of foreign travel”.

He also claimed Mrs Johnson wanted to “pull the strings” in Downing Street and said she went “completely crackers” over stories about the couple’s dog misbehaving.

During a select committee hearing in May, Mr Cummings repeatedly referred to Carrie as “the PM’s girlfriend” even though they’d been engaged for months.