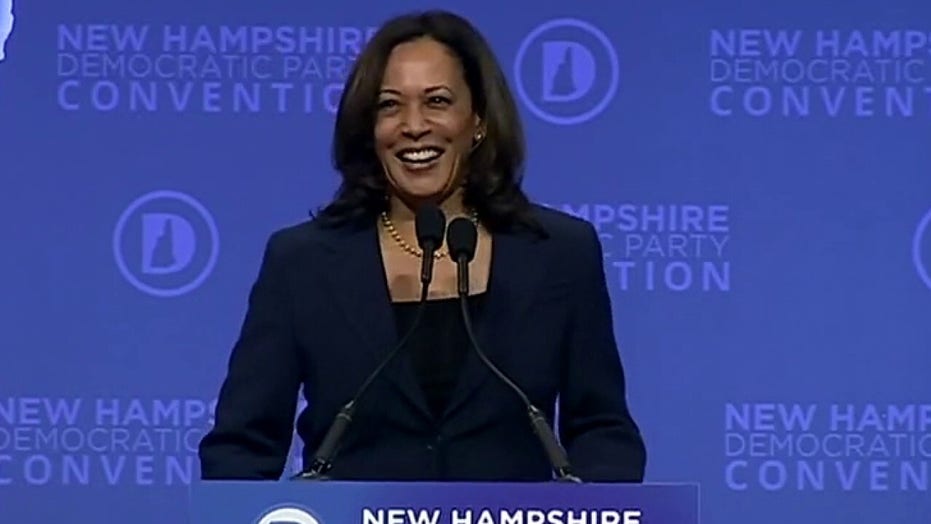 Harris the ‘safe pick,’ but may not excite African American base: Tom Bevan

Joe Biden’s selection of Sen. Kamala Harris, D-Calif., as his running mate does nothing to erase his years of anti-black slurs, friendships and policies.

In recent weeks, the presumptive Democratic nominee thrice has said, essentially, blacks are all the same.

On May 22, Biden told radio host Lenard “Charlamagne tha God” McKelvy: “I tell ya, if you have a problem figuring out whether you’re for me or Trump, then you ain’t Black.”

Biden triggered an uproar. Even fellow Leftists complained that Biden sounded as if he took Black voters for granted and treated these citizens as his personal property.

Hawk Newsome, Greater New York chairman of Black Lives Matter, said: “There is no place for a white man to define blackness in America.”

But Biden was just getting started.

From his Delaware basement on Aug. 6, Biden told Black and Hispanic journalists: “…unlike the African American community, with notable exceptions, the Latino community is an incredibly diverse community with incredibly different attitudes about different things.”

This comment detonated in Biden’s face. Many Blacks felt that Biden regarded them as tough to differentiate from each other as licorice sticks. Meanwhile, in Biden’s mind, Hispanics offer a Baskin-Robbins-like 31 flavors of traits and tendencies.

Later that day, Biden served a second scoop of this theme. He told the National Association of Latino Elected Officials that his administration would display “the full diversity of the Latino communities.”

Biden then wandered off into the ethnic quicksand.

“Now what I mean full diversity, unlike the African American community and many other communities, you're from everywhere,” he observed. “They're from Europe, from the tip of South America, all the way to our border in Mexico, and the Caribbean. And different backgrounds, different ethnicities, but all Latinos.”

Being Hispanic is a many-splendored thing, Biden marveled. And, for the third time since May, Biden said, in so many words, If you’ve seen one Black, you’ve seen ’em all.

After another volcanic eruption of outrage, Biden retreated that evening via Twitter: “Earlier today, I made some comments about diversity in the African American and Latino communities that I want to clarify. In no way did I mean to suggest the African American community is a monolith — not by identity, not on issues, not at all.”

Biden’s racial outbursts are nothing new. His checkerboard-like pattern of statements should enrage Blacks and their non-Black allies.

“I was in a caucus with James O. Eastland,” a Mississippi Democrat, Biden recalled that day at a New York fundraiser. “He never called me boy, he always called me son.” Eastland also called Blacks “an inferior race.”

Biden then spoke warmly of Georgia’s Democrat senator, “Herman Talmadge, one of the meanest guys I ever knew…” Talmadge slammed the U.S. Supreme Courts’ 1954 Brown v. Board of Education decision, which desegregated government classrooms. Talmadge’s response? “There aren’t enough troops in the whole United States to make the White people of this state send their children to school with colored children.”

“Well guess what?” Biden said of Eastland, Talmadge and other Dixiecrats.  “At least there was some civility. We got things done.”

How dumb did Biden consider black voters in Virginia? He told them on Aug. 14, 2012, that if Republicans won that year’s election, “They’re going to put y’all back in chains.”

Here’s how Biden described Obama to the New York Observer in February 2007: “I mean, you got the sorta first mainstream African American who is articulate and bright and clean and a nice-looking guy. I mean, that’s a storybook, man.”

The Washington Examiner’s Alana Goodman deeply probed Biden’s troubling history on school busing. In 1975, Biden told National Public Radio that “busing doesn’t work.” Biden argued that school integration would deny Blacks “their own identity.” He elaborated: “I think the concept of busing … that we are going to integrate people so that they all have the same access and they learn to grow up with one another and all the rest, is a rejection of the whole movement of Black pride.”

Calling busing “an asinine policy,” Biden introduced a September 1975 amendment that barred schools from using federal funds “to assign teachers or students to schools … for reasons of race.” Biden’s pro-segregation amendment passed. So did another anti-integration measure that Biden supported. Sen. Robert Byrd, D-W.Va., a former Exalted Cyclops of the Ku Klux Klan, sponsored that amendment. Byrd recruited some 150 new Klansmen for his KKK chapter in Crab Orchard, W.Va., in the 1940s. He also notoriously spoke for 14 hours as Democrat bigots filibustered the Civil Rights Act of 1964.

Biden also said this about desegregation in 1977: “Unless we do something about this, my children are going to grow up in a jungle, the jungle being a racial jungle with tensions having built so high that it is going to explode at some point.”

Biden’s comments are racist, but not as this word is shouted today. Biden’s views of Blacks avoid the hatred or homicide of Democrats George Wallace, Bull Connor or a Jim Crow lynch mob.

Instead, Biden is a Left-wing Archie Bunker, the stereotype-spewing lead character of the brilliant 1970s comedy series “All in the Family.” Producer Norman Lear’s top-rated show was a high-water mark for ethnic humor, which was how Americans once cheerfully addressed and overcame racial differences, unlike today’s corrosive techniques of in-your-face confrontation and Maoist re-education.

Like Archie Bunker, Biden is White, seems vaguely blue-collar and routinely says racially disturbing things, but without the legendary writers who made Bunker’s remarks hilarious. Anything funny that Biden says on race is strictly unintentional.

Biden is a Big Government liberal whose racism is limited to a condescending dismissal of Blacks as indistinguishable, dim and needy.

Would Archie Bunker shoot or hang a Black man? Never. Would he see Blacks from Brooklyn, Birmingham, Bermuda and Botswana as interchangeable? You bet!

And that describes Joe Biden, the man whom Democrats have picked as their standard-bearer for 1956 — make that 2020.