Leave it to Rudy Giuliani to step all over Joe Biden’s parade.

That’s the unfortunate takeaway for the new Democratic president who is planning to detail his first-term agenda and accomplishments over his first 100 days during Wednesday night’s primetime address to a joint session of Congress.

Now Biden and his allies in Congress will be sharing the spotlight — and the front-page of the Thursday newspapers — with the explosive headlines made by the Justice Department after it executed a search warrant on former President Donald Trump’s personal lawyer.

“Is it part of their rollout? No. Does it step on their story? Yes. Do we want people to spend time in the news talking about the good things that are in the American Jobs Plan, the American Families Plan and how we just cut childhood poverty in half in the American recovery package? You betcha. Unfortunately, we will be splitting our attention.”

There will obviously be great interest in the Giuliani story, Christine Pelosi said.

But she urged Democrats to not fall into the trap of giving it too much air time in their own right. What’s important is “making sure that people come out of their emotional, economic, psychological depression that COVID has caused and also continuing to get relief to people, especially our frontline workers who are still dying of COVID,” she said.

Other Democrats feel the same way. Sen. Mark Warner of Virginia doesn’t see the Giuliani probe upending Biden’s plans. “Our government is able to walk, chew gum, and enforce the law all at the same time, because the American people deserve nothing less,” Warner spokeswoman Rachel Cohen told Insider.

Wednesday’s developments with Giuliani reflect one of the stark realities any White House must deal with. Whether it be a natural disaster, a mass shooting or an FBI raid: Sometimes you can’t control what is happening in the world and what it does to your own messaging.

The problem with the Giuliani story is that now it becomes a drip-drip saga that raises even more questions about Trump’s own legal liability, a development that could very well suck up valuable oxygen that Biden would rather spend talking about what he wants to accomplish as president. It also will put to the test the president’s long-standing insistence he’s turning the page from the Trump era and won’t interfere with DOJ business.

White House officials did not respond to a request for comment on this story. 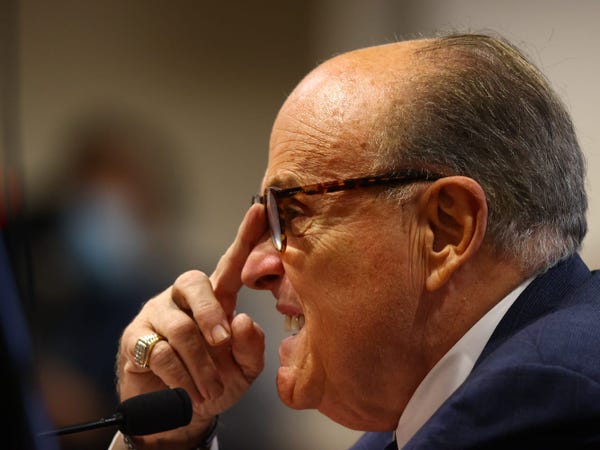 Why DOJ is ‘walled off’ from the White House

Matthew Miller, a former director of the Justice Department’s Office of Public Affairs during the Obama administration, said the White House should refer questions about the issue to DOJ and say they expect the attorney general to handle these matters “free from the White House.”

The focus on Giuliani has “absolutely zero impact on Biden’s ability to enact his agenda or govern,” he said. When you’re president, the point is not to seek attention but to get things done, he said.

“Well, I mean, if you’re a normal president,” he added, laughing.

It’s common for the DOJ to take big, controversial action that is separate from the president’s policy agenda. That’s one reason why DOJ is “walled off” from the White House on enforcement decisions, said Miller, now a partner at the strategic advisory firm Vianovo

“It’s so they don’t have to think about, ‘If we do this, is it going to impact the president’s policy agenda somehow?'” Miller said. “You want those decisions made independently.”

Biden doesn’t have any say over when DOJ takes enforcement action. It’s possible that the Justice Department might have called the White House to give them a heads up that they were executing a search warrant that would draw headlines, he said.

“But I can’t imagine the White House is worried they’re not going to get enough attention for a speech that’s going to be carried tonight on every network,” he said.

Miller also argued that Biden’s work was already challenging when it came to finding support from Republicans, even without the Giuliani news. “So what?” he said. “They’re not going to support the agenda that they’re all reflexively opposing anyway?”