WASHINGTON ― As top Republicans demand the firing of Joint Chiefs of Staff Chairman Mark Milley for his reported actions at the end of Donald Trump’s presidency, his Democratic successor seems to welcome the discussion.

Press secretary Jen Psaki went further during her daily White House briefing, saying that Biden believes Milley, a four-star Army general, is committed to the Constitution and that it was important to remember what Trump was trying to do in his final two months in office.

“The outgoing president of the United States, during this period of time, fomented unrest leading to an insurrection and an attack on our nation’s Capitol on Jan. 6,” she said, calling it “one of the darkest days in our nation’s history.”

She added: “There was broad concern from a range of members of his national security team about his behavior and fitness for office.”

Biden and his White House have been facing tough questions about his chaotic withdrawal from Afghanistan, a Kabul drone strike that appears to have killed seven children and zero terrorists, a slowdown in the economic recovery and falling approval numbers.

Republican attacks on Milley ― led by Trump himself ― have allowed Biden, at least temporarily, to change the subject to the former president’s attempt to overthrow American democracy following his failure to win reelection.

A soon-to-be released book by Washington Post reporters Bob Woodward and Robert Costa states that Milley twice spoke with his Chinese counterpart to reassure him that the United States was not seeking to start a war with China in the closing weeks of Trump’s term, and then coordinated with other military officials to make sure Trump, who at the time was trying to overturn his election loss, could not undertake illegal military actions, particularly the use of nuclear weapons. 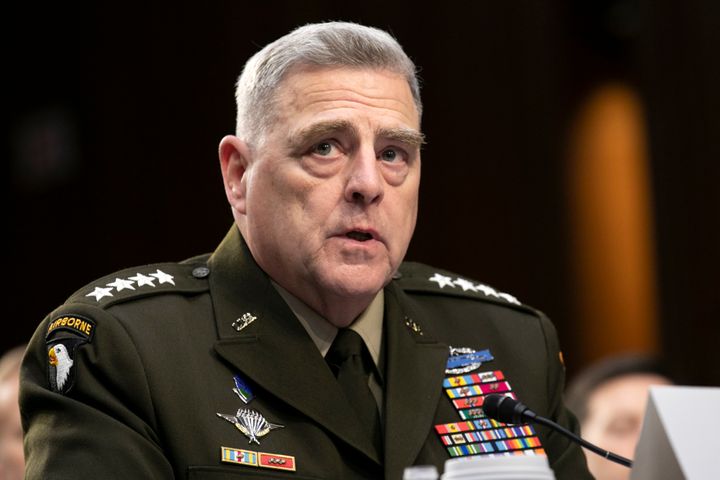 A number of Republican officeholders accused Milley of insubordination to the commander in chief and of violating the constitutional requirement for civilian control of the military.

Sen. Marco Rubio (R-Fla.), who like Paul ran for the 2016 GOP presidential nomination, wrote in a letter to Biden that Milley “worked to actively undermine the sitting commander in chief of the United States armed forces and contemplated a treasonous leak of classified information to the Chinese Communist Party in advance of a potential armed conflict with the People’s Republic of China.”

Trump, interviewed by his own former spokesperson on the pro-Trump NewsMax site, claimed erroneously that Milley’s actions constituted “treason.”

Psaki said criticism from Republicans who did not act against Trump during his unprecedented attempts to remain in power was difficult to take. “I don’t think the president is looking for the guidance of members of Congress who stood by as the leader of their party fomented an insurrection,” she said.

Trump entertained discussions of invoking the 1807 Insurrection Act to seize voting machines and to force states he had lost to Biden to re-run elections. Some of his favorite advisers wanted him to invoke martial law.

Trump did not wind up doing either but only after military leaders rebuffed his efforts to involve them in the election. (One senior Trump White House official, who spoke on condition of anonymity, said that if Trump had insisted on any of those things, top aides would have resigned en masse.)

Trump did, however, settle on a last-ditch plan: Attract thousands of his followers to Washington on the day of the congressional certification of the results and encourage them to march on the Capitol and demand that Congress reject Biden’s win and give Trump a second term. When his own vice president refused to go along with the plan, Trump lashed out at him, leading to mobs of supporters roaming the Capitol halls while chanting, “Hang Mike Pence!”

Despite this, 147 Republican members of Congress voted to reject Biden’s election win, just hours after Trump’s mob had ransacked the building and put all their lives in jeopardy.

A few weeks later, only 10 of more than 200 Republican House members and seven of 50 GOP senators voted against Trump during his impeachment for inciting the insurrection attempt.

Psaki said the overall context of Trump’s last days mitigates any concern that Milley’s actions would serve as a precedent for either him or another military leader in the future to undermine another commander in chief, including Biden.