Del Rio residents speak out on border crisis: ‘This is brutal’

In Del Rio, Texas, this weekend the mood can be described as the quiet after the storm. The mass of migrant humanity under the bridge here has been broom cleaned by the Biden administration. But the place is still shook.

My cab driver, just minutes after arriving at the tiny airport told me, “Nothing like this has ever happened before. We get people coming across the border, but not 15,000.”

The overwhelming thing you realize upon arrival in Del Rio is just how small it actually is. It is a main strip with the usual haunts, a Walmart, and some few dozens of blocks extending out into America until there is almost nothing.

The population is roughly 35,000. During September some 30,000 “irregular migrants” from Haiti, as the White House calls them, have been processed here, at one point there were 15,000 under the bridge.

To be clear, 15,000 angry or desperate people could overrun this entire community in about 20 minutes. And there have been some troubling signs of that, such as a bus full of illegal immigrants who overpowered the driver and escaped, albeit briefly, into the countryside. That story didn’t make a lot of national news, but it was sure as hell on the front page of the News Leader newspaper here in Del Rio.

One nurse I spoke with who had been under the bridge described flashes of anger from migrants that shook her and her colleagues. And look, from the point of view of the mostly Hiatians who were stuck under the bridge, it’s easy to see why it was a volatile situation.

What kept the town safe, what kept the situation under control were the border agents from all over the country who swept into Del Rio. Yes, the same ones that Biden and the White House are smearing as racists to cover for their own failures.

The people of Del Rio know what a good job they have done. They tell me, and they show it.

Half of my hotel, there are about five in total in Del Rio, is filled with border agents. I chatted with one in the hot tub, met a few more in the restaurant. They are around every corner. They are from El Paso, and Tuscon and Ohio. 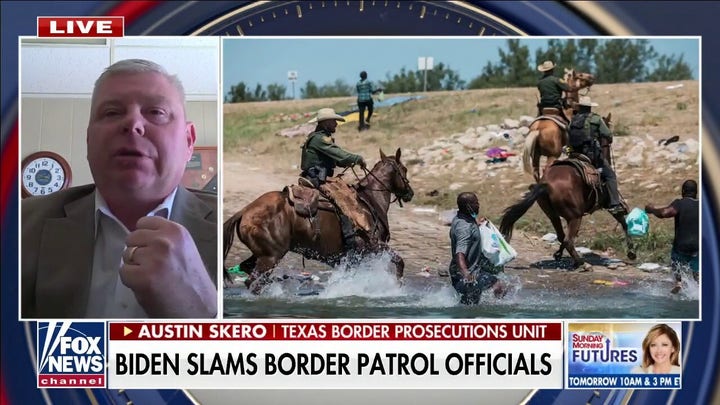 One doesn’t get the sense they care very much about what press secretary Jen Psaki has to say about being horrified by their actions from the White House podium. They don’t want to talk politics, I don’t blame them, and I respect that given their job.

And they did an amazing job. That’s been lost in this, they processed the hell out of that place, even if it was just in order to change Biden’s optics.

The people of Del Rio know what a good job they have done. They tell me, and they show it. 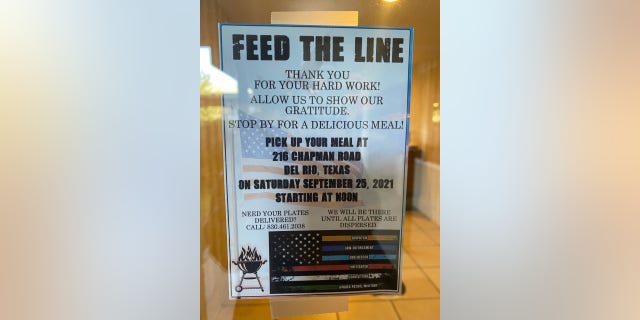 A sign in Del Rio, Texas, reading, "FEED THE LINE: Thank you for hard work!" illustrates how grateful local residents are to the border agents there to address the recent crisis.

A sign I saw read “FEED THE LINE: Thank you for hard work!” It had an address where law enforcement and first responders could go get a free meal from the community on Saturday. It was beautiful. And it was honest.

There are reports this weekend of more migrants, as many 19,000, are poised to repeat this situation in Del Rio. A few agents who thought they were going home tomorrow aren’t.

Hopefully what happened over the past few weeks is not allowed to happen again. But for now in Del Rio the interlude feels tense. And nobody seems very sure what will happen.