COVID infections are rocketing – up 20% since Tuesday, with “big numbers” expected to end up in hospital shortly after Christmas.

One of the most senior scientists in the government, Dr Jenny Harries, has warned Omicron is “probably the most significant threat we’ve had since the start of the pandemic”.

But once more Boris Johnson is digging in, at least for now. The prime minister is leaving it to individuals to decide whether to visit pubs and restaurants, to see friends and to party.

Mr Johnson is rejecting the route of Scottish leader Nicola Sturgeon, who asked Scots to limit socialising to three households in the run-up to and aftermath of Christmas.

Yet even as he holds firm, the medics at Wednesday’s press conference were begging the public to reconsider plans in the coming weeks, with England’s chief medical officer Professor Chris Whitty urging people not to mix with others if they don’t have to, and Dr Nikki Kanani, medical director of primary care for NHS England, scaling back her own Christmas plans and telling people to avoid stadiums if they’re not going there to get a vaccine.

The UK recorded its highest number of daily COVID cases since the start of the pandemic, with 78,610 fresh infections on Wednesday

By contrast, Mr Johnson was keen to stress “we’re not closing hospitality…we’re not cancelling parties” and telling the public “we’re in a different environment thanks to last year”. 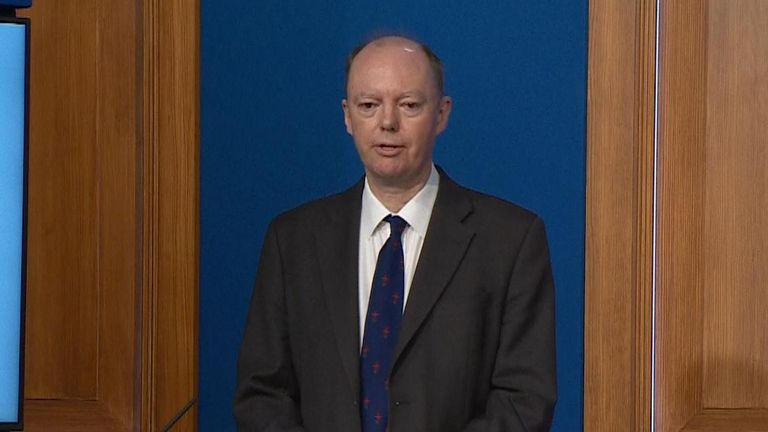 Mixed messaging during the press conference

It was, at times, like watching two different press conferences on one stage.

Mr Johnson told the nation that the vaccine rollout and booster programme are the reason we don’t have to go further and emulate Ireland, France and Germany and begin to shut down parts of the economy.

It would be currently impossible anyway since there is no economic support package yet that would enable businesses to survive if they shut down.

Mr Whitty, however, appeared to question the assertion that we can bank on the vaccines at the news conference.

He said it was too early and there was too little data to know what proportion of people infected would end up in hospital, both for the vaccinated and unvaccinated, adding: “There are several things about Omicron we don’t know but the things we do know are bad”.

Mr Johnson is nevertheless telling the nation he is banking on boosters.

Is the PM wary of another rebellion?

But could he push through further restrictions if he wanted to, given the scale of the opposition to restrictions in his own party, given 101 Tory rebels in last night’s restrictions?

Many suspect he is waiting until parliamentary recess before he introduces much more draconian restrictions, which would eventually need the backing of the Commons, probably in retrospect.

Talking to some of the 101 rebels, it is not clear that their objection to milder restrictions like COVID passports automatically means they would object to stronger restrictions.

What’s the state of the pandemic where you live?

Peter Bone, the serial rebel, told Sky News that if the case was made for further restrictions to stop hospitals from becoming overwhelmed, then he would back them.

However, he stressed the evidence was not there yet and questioned the word of scientists like Dr Harries, chair of the new UK Health Security Agency.

Other Tory MPs told me that they would likely reject new restrictions, arguing the British concern over Omicron does not appear to be matched elsewhere, and there are signs from South Africa that the consequences of Omicron are milder, something that Mr Whitty sought to challenge at the press conference.

Perhaps only if Omicron appeared much worse to the public would rebel Tory MPs come round in big numbers.

Maybe the news in the coming days will spiral such that opposition becomes more politically untenable, but maybe it will not.

This is a very fraught period for Mr Johnson.

Barely two months ago, he appeared at the Tory conference to dominate every crevice of UK politics.

Now he faces an intractable and possibly unsolvable row with his party, with MPs openly speculating on the possibility of a leadership crisis in the new year.