A senior Tory and former minister has said the media should “stop whingeing about not meeting granny at Christmas”.

He also said it served people right if they “cram themselves into a ghastly Ryanair flight or pack a pub” and catch coronavirus.

The claims came from Lord Blencathra, who as David Maclean was a Home Office minister under John Major and Tory chief whip under Iain Duncan Smith and Michael Howard.

They were made 24 hours after the Leader of the Commons, Jacob Rees-Mogg, hit out during exchanges with MPs at “endless carping” over coronavirus testing.

The peer, who stood down as an MP in 2010 because of worsening multiple sclerosis, made his comments in a House of Lords debate on face covering regulations in England.

During the debate, he urged the health minister, Lord Bethell: “Please tell the media to stop whingeing about not meeting granny at Christmas.

“Christmas is three months away and anything can happen in the meantime.”

The UK recorded 4,322 new cases of coronavirus on Friday, the highest daily rate since 8 May, while 27 people died after catching the illness.

Lord Blencathra, who now relies on a mobility scooter, continued: “On a train, passengers and crew wear masks most of the time, but shop assistants are exempt, it seems.

“I was in a shop last week and every shopper was wearing a mask. But a guy filling the shelves had no mask and was coughing and wheezing like an old sheep with lungworm. 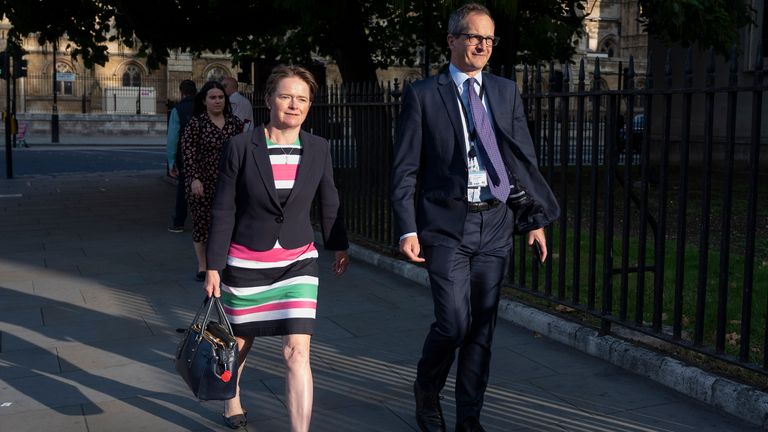 :: Subscribe to the All Out Politics podcast on Apple Podcasts, Google Podcasts, Spotify, Spreaker

“How does that encourage others to obey the law?

“I am a libertarian and… if someone wants to kill themselves with 60 cigarettes a day, I don’t mind so long as it does not affect others or I have to pay for it.

“That is why I deeply resent those who are guzzling themselves obese and expect NHS taxpayers to pay the bill for their diabetes treatment.

“So I don’t care if people cram themselves into a ghastly Ryanair flight or pack a pub and they get COVID-19, it serves them right.

“But I do care very deeply indeed that they are infecting other innocent people, such as their more elderly relatives, their friends and their workmates.”

Lord Blencathra, who succeeded grandee Willie Whitelaw as MP for Penrith and the Border in 1983, added: “For many years, we have seen oriental tourists in London wearing masks.

“It’s nothing to do with COVID-19, but out of courtesy because they had a cold and did not want to infect others. I commend that oriental courtesy and culture.

“It is high time everyone in this country did the same every time they are outdoors or in public places with no exemptions, except for a few medical exemptions, and no excuses.

“Report them instantly and hit them hard with penalties when they do not comply.”

Earlier during the debate, Lord Bethell had an unfortunate mishap when he was heard swearing after suffering technology problems while speaking from home.

After the minister’s second attempt to deliver his speech on the coronavirus regulations was disrupted, he was heard muttering: “Oh for f**** sake!”

At this point, Lord Bethell’s sound feed was cut and Baroness Penn, a government whip, completed his speech.

Lord Bethell later wrote on Twitter: “My sincere apologies to noble lords for my intemperate response to IT challenges earlier. No excuse. Won’t happen again.”

10 mins ago
We and our partners use cookies on this site to improve our service, perform analytics, personalize advertising, measure advertising performance, and remember website preferences.Ok