King Charles has been praised by a GB News guest for his speech following the death of his mother Queen Elizabeth II. Speaking to host Dan Wootton Amanda Platell said that the new monarch had struck a “incredible balance” in respecting the public’s love of his mother and his commitment that he will continue her work. The Daily Mail columnist also admitted that the wet weather in London was “like the sky was weeping” and given the circumstances was like a “movie”.

Ms Platell was forced to agree with Mr Wootton that the King had allayed many of the doubts that had about him when he was the Prince of Wales.

She said: “I agree totally Dan.

“I’ve not been a fan of his, as is well documented in my column and especially not of Camilla.

“But there has been something so poignant about watching the coverage over the last few days. 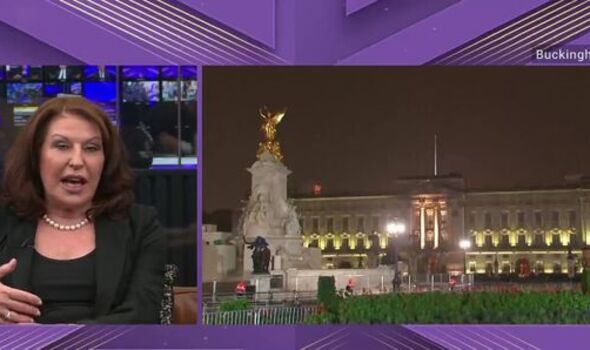 “You know that beautiful sunshine in Scotland and in Northern Ireland.

“And then it’s almost as though when she came down to London ,it’s almost like the sky was weeping.

“It started to rain softly.

“You know the whole thing it’s just almost like some kind of movie.

“I have to say I was finally tipped over by Charles’ speech.

“Where he said his darling mama he hoped that she would may flights of angels wings to her rest.

“And you just think it was so beautiful, he’s done this incredible balance of respecting the public and the love for her and his absolute commitment that he will continue the work that she’s done.

“And we kind of believe him, but also expressing his great loss for his mother.

“I mean a movie director couldn’t have written this better.