Mr Varadkar warned that the EU has a “stronger team” because of its far larger population and market in comparison, just days before the UK leaves the bloc on Friday. Mr Varadkar also suggested that Prime Minister Boris Johnson may run out of time to get a trade deal signed before the end of the year when the transition period finishes. The Taoiseach told the BBC: “The European Union is a union of 27 member states.

“The UK is only one country.

“And we have a population and a market of 450 million people.

“The UK, it’s about 60 (million). So if these were two teams up against each other playing football, who do you think has the stronger team?”

Mr Johnson has repeatedly ruled out requesting an extension to the transition period, during which the UK abides by EU rules, past December 31.

But Mr Varadkar, whose talks with the Prime Minister were seen as key in securing a breakthrough on the exit pact, questioned whether it would be possible to negotiate a full trade deal in time, saying “it will be difficult to do this”.

And he warned against any attempt by the UK to broker parts of a deal over time with the EU. 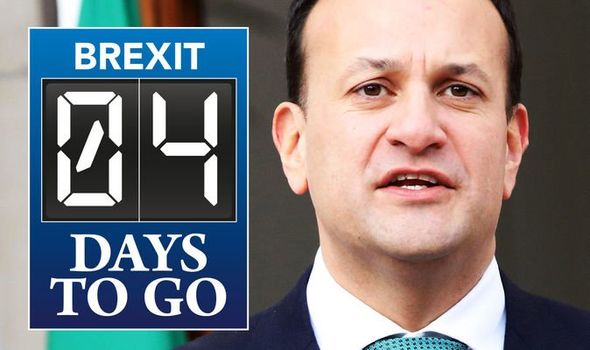 “When I hear people talk about piecemeal, it sounds a bit like cake and eat,” he said.

“That isn’t something that will fly in Europe.”

Meanwhile, the EU’s chief Brexit negotiator Mr Barnier is in Ireland today and will meet with the Irish Prime Minister in Dublin this morning.

The pair will discuss a potential post-Brexit trade deal,

8.13am today: Remainers say they will refuse to use EU exit commemoration coins

Top Remainer figures have expressed their disdain for the new Brexit 50p coin, and refused in advance to use it as tender.

Many took to social media to share their protest ideas and attempt to garner support for what is now regarded as an inevitability – the UK’s departure from the EU on January 31.

The new coin, a 50 pence piece, features the message: “Peace, prosperity, and friendship with all nations” as well as the Brexit date in smaller writing at the bottom.

Lord Adonis, a Labour peer who has fought ardently to reverse Brexit, tweeted: “I am never using or accepting this coin.”

Brexiteers mocked Guy Verhofstadt after he backed Remainers effort to hang a huge pro-EU banner along the White Cliffs of Dover in the run-up to Brexit day.

The EU’s chief Brexit coordinator tweeted: “I love you too! #IamEuropean” in response to the huge pro-EU banner.

The stunt came about after Liberal Democrat MEP Antony Hook has raised more than £14,000 for his campaign to hang the banner, which reads “We still love EU”.

In response to Mr Verhofstadt’s tweet, Brexiteers rejoiced that they would “finally be free of you next week,” before adding “bye bye Guy”.

Inhabitants of remote ‘dwarf village’ in Pakistan speak of life as outcasts
We and our partners use cookies on this site to improve our service, perform analytics, personalize advertising, measure advertising performance, and remember website preferences.Ok