Tensions threaten to boil over this morning as crunch talks take place to discuss the implementation of the Brexit deal, with the EU presenting an emergency plan to solve the impasse. So far the UK are resisting enacting the Northern Ireland protocol which it claims is unworkable. But European Commission Vice President Maroš Šefčovič, who is heading up the talks for the bloc, has threatened “resolute” action if the UK does not soften its position.

This morning’s talks are set to last four hours, with Lord Frost expected to give an update on its progress later this afternoon.

A breakthrough is not expected to take place.

The row focuses on the UK’s willingness to extend a grace period for trade in chilled meat products like sausages and mince from the end of June.

The EU warn this could trigger tariffs or quotas on British goods under the terms of the trade deal agreed in 2019.

But Lord Frost has put the onus on the EU to make concessions, declaring that the bloc needed to “show flexibility and engage with our proposals”. 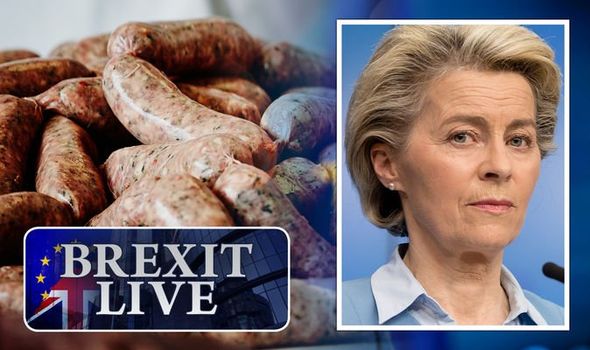 EU officials and diplomats will suggest an emergency plan, which would restrict Ireland’s access to the bloc’s single market for goods.

The move, which has not been welcomed by Dublin, is meant as a backup plan to solve the issue of where to carry out vital checks on goods.

At the moment the UK is resisting carrying out the checks on food and plants at Northern Irish ports, as it effectively puts the country within the EU’s single market with respect to the checks.

Northern Ireland officials are also fiercly opposed to the checks, as they claim it created an economic barrier between the region and the rest of the UK.

The UK has instead put forward a plan for each side to accept that their standards are broadly equivalent.

In March, the UK unilaterally decided to extend a grace period on when the checks would be introduced, prompting legal action from the EU.