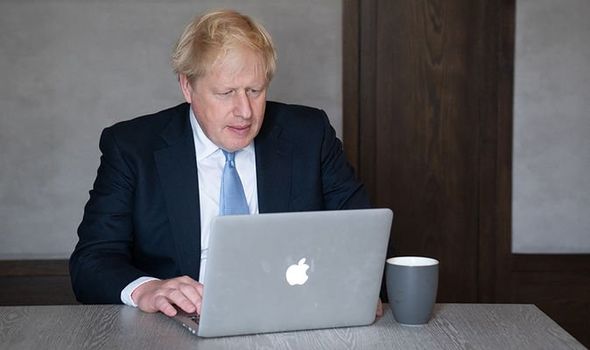 He says only the Tories possess the “guts” to fix problems left by “decades of drift and dither”. The Prime Minister’s vision for the economy will be fleshed out in his keynote speech to the Tory conference.

Mr Johnson is expected to say the UK faces a “change of direction” away from the “old broken model” of low productivity and lack of investment in home-grown talent.

He will pledge his Government to tackle the challenges ahead and to build a prosperous, high-tech future for all.

Delegates will be told: “After decades of drift and dither, this reforming Government ‑ this can-do Government that got Brexit done ‑ is getting the vaccine rollout done and is going to get social care done.

“We are dealing with the biggest underlying issues of our economy and society. The problems that no Government has had the guts to tackle before.”

The PM’s address will signal his determination not to be blown off course by the fuel crisis and other supply chain glitches that hit days before the Manchester summit.

Mr Johnson will insist the Government is delivering the “change” voters demanded when they backed Brexit in the 2016 EU referendum out of frustration at a low-wage economy fuelled by cheap overseas labour.

He will detail his plans for “uniting and levelling up” the country by spreading investment and opportunities to regions which have been neglected for many years.

His speech will add: “We are embarking now on the change of direction that has been long overdue in the UK economy.

“We are not going back to the same old broken model with low wages, low growth, low skills and low productivity ‑ all of it enabled and assisted by uncontrolled immigration.

“And the answer is not to reach for the same old lever of uncontrolled migration to keep wages low.

“The answer is to control immigration, to allow people of talent to come to this country but not to use immigration as an excuse for failure to invest in people, in skills and in the equipment or machinery they need to do their jobs.”

This will likely be seen as a riposte to claims from Remainers and some business leaders that Brexit caused supply problems.

Instead, he will argue that firms need to invest in technology and a skilled workforce to help build the economy of the future.

“That is the direction in which this country is going ‑ towards a high-wage, high-skill, high-productivity economy that the people of this country need and deserve in which everyone can take pride in their work and the quality of their work,” he will say.

“To deliver that change we will get on with our job of uniting and levelling up across the UK ‑ the greatest project that any Government can embark on.”

Mr Johnson will state that the public should not put up with vast regional gaps in prosperity and job opportunities.

“There is no reason why the inhabitants of one part of the country should be geographically fated to be poorer than others.

“Or why people should feel they have to move away from their loved ones or communities to reach their potential,” he will say.

He will also seek to reassure Tory MPs in the party’s southern heartlands that his “levelling up” programme is not about investing in the North at the expense of the South.

High-population regions with soaring house prices will benefit from a more even spread of wealth across the entire country, Mr Johnson will argue.

“Levelling up works for the whole country ‑ and is the right and responsible policy.

“Because it helps to take the pressure off parts of the overheating South-east, while simultaneously offering hope and opportunity to those areas that have felt left behind,” he will say.

The PM will continue: “There are all kinds of improvements you can make to people’s lives without diminishing anyone else, and they are the tools of levelling up.

“If you want the idea in a nutshell it is that you will find talent, genius, flair, imagination, enthusiasm ‑ all of them evenly distributed around this country. But opportunity is not and it is our mission as Conservatives to promote opportunity with every tool we have.”

Mr Johnson will also highlight the need for school leavers to learn the skills for a high-tech future and will call for a shift to apprenticeships and vocational training rather than academic higher education for all.

He will tell Tory grassroots there is “nothing wrong” with not going to university.

Ahead of his speech, the Prime Minister denied being worried about shortages of HGV drivers and other key staff, or about rising energy prices. He went on to dismiss concerns about rising inflation.

In an interview with BBC News in Manchester, he said: “We’re moving to a new approach and I do not want to go back to what I think is a tired, old, failed approach which people voted against twice, in 2016 and in 2019.

When he was asked if inflation might swallow up any wage rises, Mr Johnson replied: “Actually I think that people have been worried about inflation for a long time and it hasn’t materialised.”

Pressed on whether he is worried about inflation, the Prime Minister added: “I believe that supply will be encouraged, and we want to encourage people to invest.”