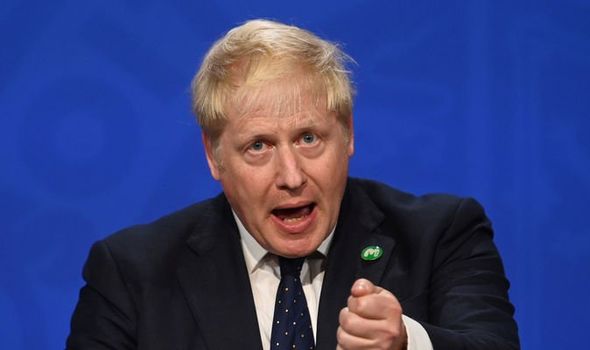 Tory MPs were rocked by a fivepoint drop in the polls last week – putting Labour ahead for the first time since 2017.

Many are considering voting against Government plans to raise National Insurance contributions (NICs) to pay for social care and a proposal to temporarily suspend the triple lock on state pension rises.

One MP told the Sunday Express: “I feel like I’ve woken up in a socialist republic. It’s Alice In Wonderland stuff.”

A third rebellion tomorrow could come in a debate over whether to press ahead with the HS2 rail line, which critics believe will cost taxpayers as much as £200billion.

To make matters worse, the NICs increase of 1.25 percent comes alongside another 5 percent rise in council tax, both to pay for social care. The fury on the backbenches from historically Labour seats won by Conservative MPs has been fuelled by new analysis from the TaxPayers’ Alliance (TPA), which shows that the “Boris tax” will hit their constituents hardest.

According to the TPA, after the tax rise NICs will account for 6.64 percent of income in the East Midlands, 6.44 percent in the West Midlands and 6.43 percent in the North East. This compares to a UK average of 6.09 percent, with the South East paying 5.88 percent.

Added to that there are concerns that the temporary ditching of the triple lock for pensions to stop an eight per cent rise this year will harm Red Wall areas most.

The North East and North West have among the joint second highest levels of pensioner poverty.

Former Cabinet minister Esther McVey, who founded the Blue Collar Movement which swept the RedWall areas, said: “Increasing NICs means that people in the North will disproportionately pay more to give a disproportionate benefit to the South – that is not my idea of levelling up.”

On the triple lock, she added: “Politics is all about trust and I think anyone who believes there will be no consequence from breaking those election promises so easily will be mistaken.”

North West Leicestershire MP Andrew Bridgen said: “It is hard for the Government to justify continuing with HS2 when it is putting up taxes and breaking our manifesto promises on that and pensions.”

Caroline Abrahams, Charity Director at Age UK, warned: “The suspension of the triple lock, plus the ending of the Universal Credit uplift, means that areas with significant numbers of people living on low incomes will take a financial hit.”

A Government spokeswoman said: “The revenue raised through the tax changes announced on Tuesday will reform adult social care right across the UK.

“For the first time, we have placed a limit on the amount people will spend on care over their lifetime in England, and significantly increased state support.”