VALDOSTA, Ga. ― Strong turnout from Black voters, fueled by on-the-ground canvassing operations and a backlash to vitriolic GOP attacks on Democrat Raphael Warnock, has put Democrats within striking distance of winning two Senate seats in Georgia and full control of the federal government.

The races remain toss-ups after a record 3 million people cast their ballots during the state’s early voting period, which ended last week with Black voters increasing their share of the electorate compared with the general election’s early vote period. Republicans are now banking on a massive turnout on Election Day to win the two races, and are sending President Donald Trump to the state’s heavily conservative northwest corner on Monday night in hopes of creating a voter surge of their own.

Trump’s rally will cap a frantic and financially costly final weekend of campaigning for both parties. President-elect Joe Biden is set to campaign in Atlanta hours before Trump, while Vice President-elect Kamala Harris traveled to Georgia on Sunday afternoon. Texas Sen. Ted Cruz campaigned for Republicans in Atlanta’s suburbs, and the cast of HBO’s “The Wire” did the same for Democrats. Republicans continue to hold an advantage in a television and digital advertising war that has topped $100 million, while Democrats have continued to fund far larger field operations than the party ran during the general election.

Warnock is running against appointed GOP Sen. Kelly Loeffler. Democrat Jon Ossoff is battling incumbent Republican David Perdue in the other contest. If the GOP wins both seats, Biden will have to contend with a Senate run by Republican Mitch McConnell for at least the first two years of his presidency, stymying Democratic progress on everything from coronavirus relief to climate change and the makeup of the federal judiciary.

‘Welcome To The Blue Georgia’

Democrats’ hopes of winning the Senate have been substantially buoyed by strong Black turnout so far, in contrast to the general election, where Black turnout increases trailed those of white voters. Historically, Black voter turnout has dipped in Georgia runoff elections.

“It’s a new year, it’s a new moment,” Warnock told a crowd of hundreds who gathered in a downpour to see him speak at New Life Ministries in this city near Georgia’s border with Florida on Saturday night. “The rest of the country did not see Georgia coming on Nov. 3. Welcome to the new Georgia. Welcome to the blue Georgia.”

“It’s been the rural and suburban counties that have really been leading the way in increasing Black turnout,” said Tom Bonier, CEO of the Democratic data firm TargetSmart, noting higher turnout both in rural counties in the state’s so-called Black Belt and in cities like Columbus, Augusta and Macon.

In particular, Democrats have targeted Savannah. Harris campaigned there with Warnock and Ossoff on Sunday, and Warnock, a native of the city, has released a television ad highlighting his roots.

“He’s a son of Savannah, and he’ll always remember where he’s from,” a narrator says in the 30-second ad.

Bonier said the runoff has also seen a surge of new Black voters. Of the over 102,000 people who cast ballots in the runoff after not doing so in the general election, 40% were Black. (A typical Georgia electorate is roughly one-third Black.)

“It’s not just that they are a larger share of the early vote than they were in the general, it’s that there’s a lot of African American voters who didn’t vote in the general who are being drawn out in this race,” Bonier said.

A key factor, according to Democratic operatives, is anger over the GOP’s vociferous attacks on Warnock, the senior pastor at Ebenezer Baptist Church in Atlanta, the onetime pulpit of Martin Luther King Jr. Loeffler and Republican outside groups have engaged in repeated over-the-top and false slams on Warnock, taking his sermons out of context, labeling him a Marxist and suggesting he covered up child abuse.

“The attack ads, the portrayal of Rev. Warnock using historically racist tropes in the ads is insulting,” said Gwen Mills, the secretary-treasurer of the labor union Unite Here, which is contributing to a major field organizing program in the state. “But it’s also invigorating in the sense that people aren’t going to stand for this. We’ve heard it a lot.”

Warnock, talking with reporters after the Valdosta rally, made a similar point.

“I think Black voters, and voters all across the state, are frustrated with politicians who are only thinking about themselves,” he said. “I think Sen. Kelly Loeffler has run the most negative campaign in Georgia history. She’s made a decision to attack my faith, and my church. And it’s not resonating.”

Nse Ufot, CEO of the New Georgia Project, emphasized the role Biden’s victory and Democratic successes in fighting voter suppression have played in empowering Black voters and proving their votes matter, helping them turn out in higher numbers despite a decrease in the number of early voting sites and ballot dropboxes in key counties compared to the general election.

“We’ve been able to leverage the enthusiasm and resolve that Black Georgians have,” Ufot said. “We’ve invested a huge amount of resources into making sure those votes are counted. It minimizes the amount of intimidation voters feel when they go to cast their ballot.”

The New Georgia Project has teamed up with Unite Here and BlackPAC for a massive field organizing and door-knocking project in the state. Mills said the union has employed more than 1,000 laid-off hospitality workers as canvassers who have knocked on more than 1.1 million doors.

Georgia Democrats attribute their success so far to the party’s decision to abandon its reluctance to knock on doors and engage in full-scale canvassing during the coronavirus pandemic, a position many operatives blamed for the party’s failure to meet electoral expectations in November.

“We learned that we need to knock those doors,” said Deborah Gonzalez, the district attorney for the district including Athens, after a rally with Ossoff in the college town. “We took a step back because of COVID, and we saw how that hurt us. And that’s how we know we have to do this.”

It’s long been clear Republicans would need to replicate their Election Day turnout margins from the general election in order to win the runoff, but Democrats’ surprising strength has made it a more difficult mountain to climb.

The National Republican Senatorial Committee has more than 1,000 of its own field organizers on the ground in the state, trying to insure a massive Election Day turnout to swamp the Democratic advantage in earlier voting. One major Republican outside group’s internal polling indicates the split between the parties on Election Day voting could be even greater than it was during the general election ― an encouraging sign for the GOP.

Still, the GOP has stuck with its almost exclusively negative messaging ― relentlessly working to portray both Ossoff and Perdue as radical extremists. Republicans are hopeful Trump will pick up on that message during his trip to northwest Georgia on Monday night, rather than focusing on his ongoing feud with Georgia election officials over their refusal to indulge his fantasies about voter fraud.

Loeffler, appearing on “Fox News Sunday,” declined to say whether she would bow to Trump and vote to throw out her own state’s electoral votes on Jan. 6, the day after the election.

“I’m looking very, very closely at it, and I’ve been one of the first to say, everything is on the table,” she said. “I’m fighting for this president because he’s fought for us.” 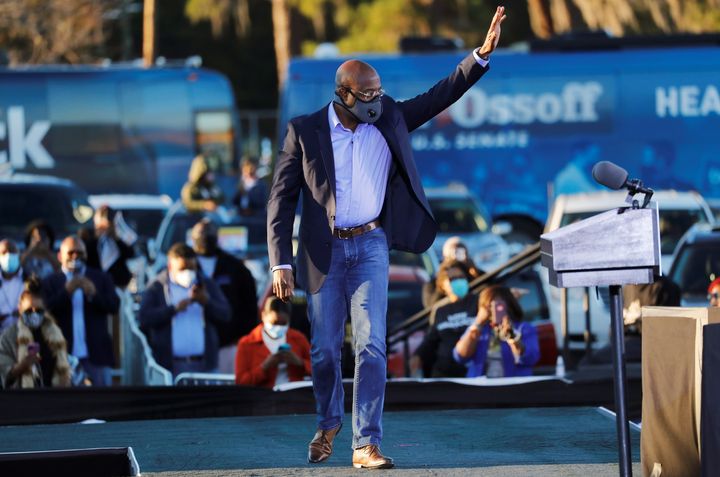