President Joe Biden urged Californians to keep Gov. Gavin Newsom (D) in office on Monday, the eve of a closely watched recall election that has worried Democrats and embolden Republicans as the nation continues to fight the COVID-19 pandemic.

“The decision you’re about to make … it’s going to reverberate around the nation,” Biden said Monday in Long Beach. “All of you know that last year I got to run against the real Donald Trump. This year, the leading Republican running for governor is the closest thing to a Trump clone that I’ve ever seen in your state.”

“Can you imagine him being governor of this state?” the president added, referencing Larry Elder, the Republican front-runner among the list of candidates who would replace Newsom if he loses. “You can’t let that happen.”

Newsom has won praise from many Californians over his handling of the COVID-19 pandemic, imposing aggressive measures early on, including mask mandates and stay-at-home orders. But Republicans have used the measures to bolster their case for a recall, pointing to school closures and pandemic shutdowns in an attempt to win the governorship in the nation’s most-populous state.

Newsom has also made missteps during the pandemic. In particular, he sparked criticism when he celebrated a lobbyist friend’s birthday in November 2020 by dining with a group at The French Laundry, a Michelin-starred restaurant in Napa Valley, after telling Californians they shouldn’t travel and should avoid gatherings until the pandemic eased. 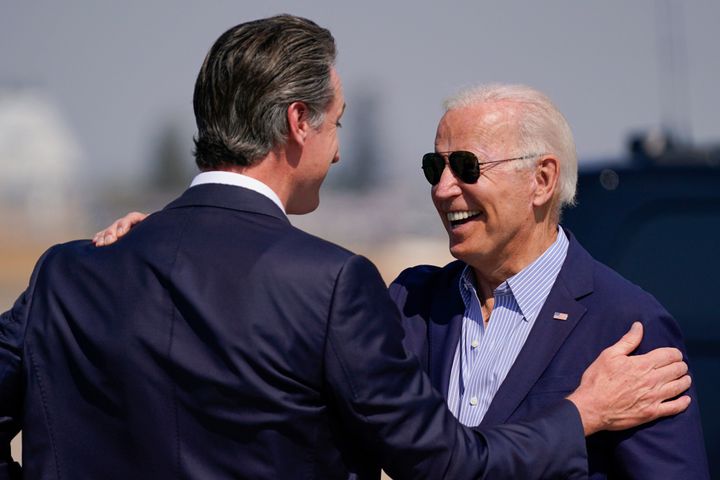 Newsom on Monday cast the race as a crossroads for the state and championed his efforts to protect Californians from COVID-19, saying his administration would keep focused on racial, social and environmental justice. He pointed to his visit with Biden on Monday in Northern California, where more than 2.2 million acres have already burned in wildfires this year.

“It’s a remarkable moment in our state and nation’s history,” Newsom said Monday in Long Beach. “With all the progress we’ve made … all of that is at risk if we don’t turn out and vote no on this recall tomorrow.”

Every registered voter in California received a ballot by mail last month asking two questions: Do they want to recall Newsom? And if he is removed, who should replace him? Anyone who hasn’t returned their ballot already can drop it off or head to the polls in-person on Tuesday to answer those questions.

If more than 50% of voters support a recall of Newsom, he will be removed from office and whoever has the most votes as his replacement will finish up his term, which is set to expire in early 2023. It doesn’t matter how small a candidate’s share of the votes is as long as it’s higher than any of the others.

The Associated Press found that it’s possible that someone running to unseat Newsom could win with just 25% of the votes.

Polls held before the election show Newsom favored to defeat Elder and become the state’s first governor to survive a recall vote. A recent poll found 60% of likely voters said they would keep him in office while about 39% said they would vote to recall the governor. Democrats outnumber Republicans in the state by about two to one.

Only one other recall attempt (and there have been many) has made it to an election. That recall, of Democratic Gov. Gray Davis, resulted in his removal and replacement by Republican Arnold Schwarzenegger in 2003.

Elder has drawn close scrutiny in recent weeks. A report on Sunday by HuffPost’s Daniel Marans found that he spoke at a conference in 2017 that also featured speeches by white nationalists. While Elder wasn’t in the room during the other speakers’ events, he did appear on a panel with them. (His campaign said any attempt to link him to the white nationalist speakers was “absurd.”)

Elder has also vowed to oppose Newsom’s efforts to rein in the spread of the coronavirus, saying he would lift mask rules and vaccine mandates if elected. The Republican has touted the support of voters in recent weeks as a bellwether on Newsom’s administration, characterizing Democrats’ massive spending and visits by the president as evidence the party is worried about the recall.

Biden’s visit to California on Monday is just his second in-person campaign event since he entered the White House.

Vice President Kamala Harris, who served as one of California’s senators, also flew to the state last week to support the governor, calling him a “great American leader” and a “longtime friend.”