Tracy Stone-Manning, President Biden’s nominee to lead the Bureau of Land Management (BLM), argued in her graduate thesis that Americans need to engage in population control to protect the environment.

Stone-Manning has already come under fire in recent weeks for her connection to a tree spiking incident – an ecoterrorism tactic – in Idaho in the 1980s, where she traded her court testimony for legal immunity.

But her past links to ecoterrorists aren’t the only controversial material in her background. In her graduate thesis, a copy of which was reviewed by Fox News, Stone-Manning also urged Americans to have no more than two kids in order to protect the environment.

“The origin of our abuses is us. If there were fewer of us, we would have less impact,” states the thesis, which was first flagged by the Daily Caller on Thursday. “We must consume less, and more importantly, we must breed fewer consuming humans.”

Stone-Manning created a series of eight advertisements for her thesis that focused on the issues of overgrazing, overpopulation, a mining law from the late 1800s and the lumber industry.

One ad refers to a human child as an “environmental hazard” and encouraged Americans to only have two children and no more.

“The earth is only so big, and we can tap into it only so often. In America, we tap in often and hard,” Stone-Manning’s ad reads. “When we overpopulate, the earth notices it more. Stop at two. It could be the best thing you do for the planet.”

Stone-Manning repeated the same push in a television ad script she wrote for her thesis, as well, which is set at a “Yuppie” home and features a woman mulling over having a third child as she drinks a cup of coffee.

“I know it would be my third baby, but there’s not a population problem here like in Africa or India…,” the woman says in the script. “And besides, smart people like Bob and me should be the people having kids.” 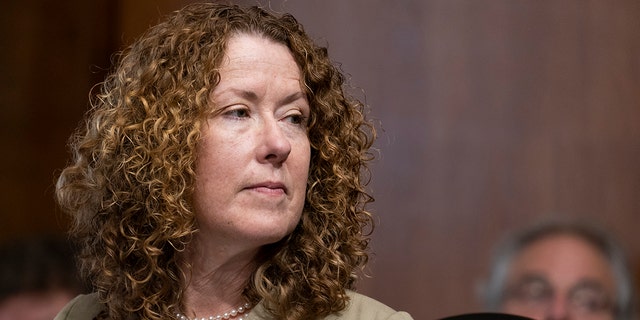 Tracy Stone-Manning listens during a confirmation hearing for her to be the director of the Bureau of Land Management, during a hearing of the Senate Energy and National Resources Committee on Capitol Hill, Tuesday, June 8, 2021, in Washington. (AP Photo/Alex Brandon)
(AP)

The script then calls for a “montage” of clips depicting pollution while telling viewers to “do the truly smart thing” and “stop at one or two kids.”

“The point is a simple one,” Stone-Manning wrote of the ads in her thesis. “Harshly, the ads say that the earth can’t afford Americans. More softly, they ask people to think about how their family planning choices affect the planet.”

The thesis also claims that cattle grazing on public lands is “destroying the West.” If confirmed, Stone-Manning would oversee an agency that, according to the BLM website, “manages livestock grazing on 155 million acres” of public lands.

Stone-Manning has previously faced sharp opposition from Republicans over her links to an ecoterrorist plot.

In 1993, Stone-Manning was granted immunity in exchange for her testimony that she retyped and sent an anonymous letter to the U.S. Forest Service on behalf of John P. Blount, her former roommate and friend, Fox News previously reported.

The letter told the Forest Service that 500 pounds of “spikes measuring 8 to 10 inches in length” had been jammed into the trees of an Idaho forest. “P.S., You bastards go in there anyway and a lot of people could get hurt,” the note concluded.

While Stone-Manning told senators that she had never been the target of an investigation, that appears to conflict with what she previously said about the case.

“It’s clear that Ms. Stone-Manning was intentionally trying to deceive the Senate Committee on Energy and Natural Resources,” the committee’s ranking member, Sen. John Barrasso, R-Wyo., said last week. “She told the committee she had never been the subject of an investigation and yet complained about being investigated in the press.”

The White House did not respond to Fox News’ request for comment for this article.