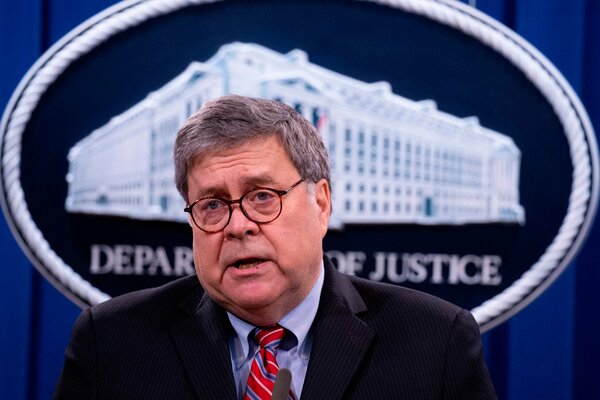 By Katie Benner and Charlie Savage

WASHINGTON — The Justice Department sought the email records of three Washington Post reporters the day before William P. Barr stepped down as attorney general in a last-ditch effort to identify who had told the newspaper about conversations between Trump campaign officials and the Russian ambassador, newly unsealed court documents show.

The Dec. 22 request, one of Mr. Barr’s last acts in office, was part of a major escalation by the Trump administration during its final weeks in power of a yearslong campaign to crack down on leaks of classified information to the news media. The Trump Justice Department also sought New York Times reporters’ records in that period.

The Biden Justice Department had disclosed the effort — which also included seizing the reporters’ phone records — last month, leading to the unsealing of the Post docket. The files shed new light on what happened, including listing the day prosecutors applied for the email records order and identifying three Post articles that were the subject of a leak investigation.

Those articles, identified only by their dates of publication, apparently included one in May 2017 that reported that President Donald J. Trump’s son-in-law, Jared Kushner, had discussed with Russia’s ambassador, Sergey I. Kislyak, the possibility of using Russian diplomatic facilities as a communication back channel during the transition.

They also included a June 2017 article about the Obama administration’s struggles to deal with Russian election interference the previous year, and a July 2017 article reporting that Jeff Sessions, the attorney general at the time, had discussed campaign issues with Mr. Kislyak when Mr. Sessions was a senator and a Trump campaign surrogate the previous year.