Shortly before the 2016 election, Paul D. Ryan of Wisconsin, the Republican nominee for vice president and the speaker of the House, told a group of college Republicans why he thought Democrats winning control of the Senate would be a policy nightmare.

“Do you know who becomes chair of the Senate Budget Committee?” Mr. Ryan asked. “A guy named Bernie Sanders. You ever heard of him?”

Republicans have long feared the prospect of Mr. Sanders, a self-described democratic socialist from Vermont, taking the helm of the powerful committee given his embrace of bigger government and more federal spending with borrowed money. With Democrats reclaiming the Senate, that fear is about to become a reality. Mr. Sanders, the most progressive member of the chamber, will have a central role in shaping and steering the Democrats’ tax and spending plans through a Congress that they control with the slimmest of margins.

Mr. Sanders, an independent who caucuses with the Democrats and twice ran unsuccessfully for the party’s presidential nomination, said he would move quickly in his new role to push through a robust and deficit-financed economic stimulus package soon after President-elect Joseph R. Biden Jr. takes office.

“I believe that the crisis is of enormous severity and we’ve got to move as rapidly as we can,” Mr. Sanders said in an interview.

“Underline the word aggressive,” he said. “Start out there.”

Despite Democrats’ narrow control of the Senate, Mr. Sanders is expected to exert heavy influence over taxes, health care, climate change and several other domestic issues. That is because his role as budget chairman will give him control over a little-known but incredibly powerful congressional tool that allows certain types of legislation to win Senate approval with just a simple majority.

That tool — a budget mechanism called reconciliation — allows Congress to move some legislation without gaining 60 votes. It has become the vehicle for several major legislative efforts this century, including tax cuts under President Trump and President George W. Bush, and the final version of President Barack Obama’s signature health care bill.

The reconciliation process begins with lawmakers adopting a budget resolution, originating in the House and Senate Budget Committees, which can include directions to congressional committees on how much to increase federal spending or taxes.

The nature of the process effectively gives Mr. Sanders a leading role in deciding how expansive — and expensive — Mr. Biden’s ambitions for new taxes and spending will be.

Mr. Sanders said in the interview that he wanted an initial, emergency stimulus package to be “big.” He thinks it must include an additional $1,400 in direct payments for adults and children, on top of the $600 that Congress just passed, along with money for states and cities to fund coronavirus vaccine distribution, testing and contact tracing. He also wants to create an emergency universal health care program, so that anyone can get medical treatment during the pandemic, whether they currently have insurance or not.

Mr. Sanders said he had been speaking with Mr. Biden about the scale and timing of stimulus legislation. He said that he did not intend to try to force his long-held priorities, such as “Medicare for all,” into a relief bill. However, he does intend to test the legal bounds of how reconciliation can be used so that Democrats can pass policies that go beyond traditional budget items and address “structural problems in American society.”

Neither Mr. Sanders nor Mr. Biden has specified the exact size of the next stimulus bill, though the president-elect is expected to outline his economic plan on Thursday. Mr. Sanders said the legislation, which could cost more than $1 trillion, should look to raise revenue in “a progressive manner,” suggesting he would push to include tax increases on the wealthy and on corporations. Under Senate procedure, the details of any tax increases would come from the Finance Committee and be spearheaded by a liberal Democrat, Ron Wyden of Oregon, who has also vowed to move aggressively on stimulus and raising taxes for corporations and the rich.

“You have to start with the proposition that everybody has to pay their fair share.” Mr. Wyden said in an interview.

Mr. Biden’s aides say they will work closely with Mr. Sanders and the other committee leaders who will write the legislation to fit Mr. Biden’s policy dreams into legislative text. But it will require some negotiation and compromise. Mr. Sanders’s presidential campaign proposals dwarfed Mr. Biden’s in cost and in reach. Mr. Biden pointedly does not support Medicare for all, and in laying out his priorities for the next stimulus, he has not emphasized the temporary health care coverage expansion that Mr. Sanders favors.

In sign of how far their alliance has come, however, Mr. Biden said last week that he nearly tapped Mr. Sanders to be his labor secretary, though he decided against it because it would have risked losing Mr. Sanders’s seat — and Senate control — in a special election. 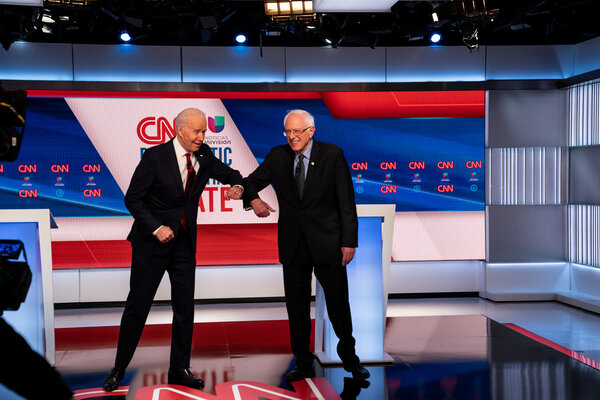 More moderate Senate Democrats could also pose a challenge given the party’s slim majority. Some Democrats oppose several of the spending programs that Mr. Biden has proposed, along with many that Mr. Sanders supports. Even what appeared to be unifying policies could run into roadblocks. Last week, Senator Joe Manchin III of West Virginia, the most conservative Democrat in the chamber, signaled that an additional $1,400 per person in direct payments would not be a high priority for him in a stimulus bill, though he did not rule out voting for expanded payments.

Mr. Sanders said he planned to work cooperatively with Mr. Biden and the Senate’s Democratic leaders, leaving his fight for Medicare for all to his work on the health committee. He said he was confident that his reconciliation legislation “will have strong support among Democrats.”

Answers to Your Questions About the Stimulus Bill

The economic relief package will issue payments of $600 and distribute a federal unemployment benefit of $300 for at least 10 weeks. Find more about the measure and what’s in it for you. For details on how to get assistance, check out our Hub for Help.