The pop star with the No. 1 album in the country joined the Biden administration’s efforts to encourage the young and unvaccinated to get their shots. 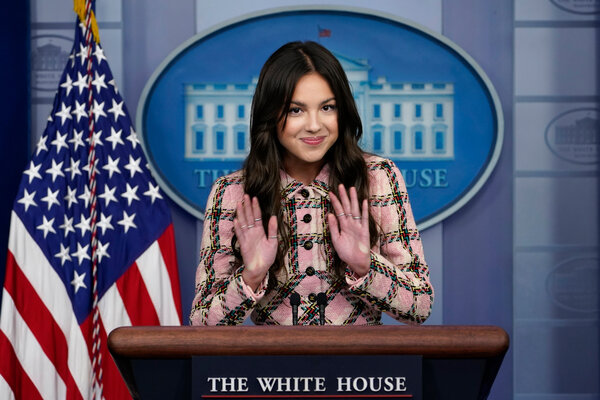 WASHINGTON — Nixon and Elvis. Trump and Kanye. Biden and Olivia.

On Wednesday, Olivia Rodrigo, the 18-year-old pop star with the No. 1 album in the country, visited the White House and joined the Biden administration’s efforts to use the young and influential to reach the young and unvaccinated.

“It’s important to have conversations with friends and family members,” Ms. Rodrigo said, reading from prepared remarks during a short appearance in the White House briefing room, “and actually get to a vaccination site, which you can do more easily than ever before.”

The White House could not have scripted it better. (In fact, White House officials helped her craft her remarks, according to an administration official.) The “Good 4 U” singer has millions of followers on social media who hang on her every word, and she is part of a growing list of creators, celebrities and influential people who are interested in working with the White House to deliver a pro-vaccine message directly to their respective communities.

Rob Flaherty, the White House director of digital strategy, has been organizing an effort to reach out to people like Ms. Rodrigo and invite them to Washington to create content. The plans for bringing her to the White House, Mr. Flaherty said in an interview, began in June. After she arrived, Ms. Rodrigo wandered the halls of the West Wing with Dr. Anthony S. Fauci, stopping by desks and chatting with officials before it was time to film a series of educational videos with President Biden.

“Not every 18-year-old uses their time to come do this,” Jen Psaki, the White House press secretary, said from the lectern.