With the main allied military air base about to close, negotiations are underway with Turkey about continuing to secure the civilian airport as the Taliban advance across the country. 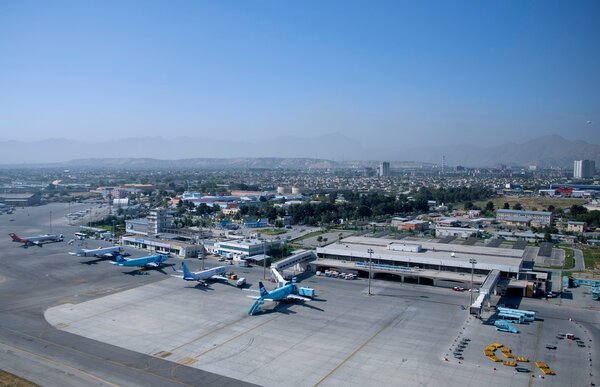 KABUL, Afghanistan — For years, Hamid Karzai International Airport has been a main gateway to Afghanistan, an aspirational symbol of civilian life and normalcy amid military bases, warplanes and the scars of decades of fighting in the surrounding countryside.

But now the airport, known to all as Kabul International, has become the last stand in America’s 20-year campaign in Afghanistan.

If the United States and its allies can complete a deal for Turkey to keep forces in place to secure the airport, President Biden can go ahead with his plan to maintain the American Embassy — and diplomatic missions from allied countries — even after combat troops for the United States and the North Atlantic Treaty Organization depart.

If not, senior American and NATO officials said, the consequences could be substantial: Mr. Biden’s plans to try to retain a diplomatic presence in the country, as part of an international effort seeking to prevent a return to the grim Taliban-controlled era of the past, will most likely be cast aside, and access to the country by aid groups could be cut off.

“Security at the airport in whatever form or fashion it takes will be important, not only for the United States, but for any other nation that likewise plans to maintain a diplomatic presence in Kabul,” the Pentagon spokesman, John F. Kirby, said in an interview.

James G. Stavridis, a retired admiral who served as the North Atlantic Treaty Organization’s supreme allied commander for Europe, put it more bluntly. “Without a secure airport, the ability to conduct day-to-day embassy operations in a large country like Afghanistan, which is the size of Texas, is significantly diminished,” he said.

“In addition to personal safety and ability to evacuate in emergencies, helos and planes are needed to move U.S. diplomats, aid workers, intelligence officers and support personnel around the country,” he said. “Without that fundamental capability, the mission of the embassy is a failure.”

Turkey for its own reasons wants to retain a presence in Afghanistan, where it has a long affiliation, and a shared history and religion as well as an economic stake. As a Muslim-majority nation and a member of the Atlantic alliance, Turkey has played a consistent role in Afghanistan since 2001, including sending troops in noncombat roles. It currently has about 600 service members in Afghanistan, where its main mission has been providing security for the airport.

The talks over completing an agreement for Turkey to continue doing so have yet to resolve details of how the operation would work. They are also taking place against the backdrop of high-level strains between Turkey and the United States over issues like Ankara’s purchase of Russian antiaircraft batteries.

Military planners and intelligence analysts say the growing strength of the Taliban and planned withdrawal of international combat troops means that the Afghan government was likely to fall in six months to two years. And while it is not clear that the Taliban would want to completely shut down the airport and isolate the country if they take full control of Afghanistan, the group has signaled that it will not accept the presence of any foreign troops, even from Turkey.