WASHINGTON — Amid the sea of troubling facts, arrests and iconic images that have emerged in the days since the assault on the Capitol, one element remains largely absent: reassurances from some of the nation’s top national security officials.

Neither the acting attorney general, Jeffrey A. Rosen, nor the F.B.I. director, Christopher A. Wray, has appeared at the type of high-profile news conference that typically marks a major criminal investigation, instead issuing news releases. Mr. Rosen also called for calm and vowed to fully investigate the violence, but the comments came in a video posted by the Justice Department on YouTube around midnight.

Chad F. Wolf, the departing acting secretary of homeland security, was in the Middle East during the siege and did not return until later in the week. He also issued a news release that week calling the riot “tragic and sickening.”

For the most part, officials have not addressed that President Trump himself incited the attack by his supporters on Congress’s certification of the Electoral College results. Mr. Trump’s refusal to concede the election or to acknowledge his role in goading his supporters has forced administration officials to choose between remaining relatively silent or speaking out in a public setting where they could be pushed to directly contradict him, according to two current government officials and two former national security officials.

Mr. Wolf, who has stepped down but remains in the department, told CNN on Wednesday that he was “disappointed that the president didn’t speak out sooner.” In an interview with The New York Times, Kenneth T. Cuccinelli II, the acting deputy homeland security secretary, concurred.

“I think that’s fair,” Mr. Cuccinelli said, adding that Mr. Trump’s comments last Thursday condemning the violence after the deadly siege were “thorough and spot on.”

“But we really could have used that” on the day of the attack, Mr. Cuccinelli said. “There’s a lot of talk of unity right now, and I hope we can find some unity of prosecution.”

Mr. Rosen and Mr. Wray face job security risks at a time when their ousters could prompt further chaos. In the weeks leading up to the riot, Mr. Trump pressured Mr. Rosen to find more evidence of election fraud, according to three people with knowledge of the discussions, doubling down on his baseless claims. He fears that being fired now would destabilize the Justice Department at a critical moment for national security, according to one of those people.

The president had long left Mr. Wray’s status uncertain, previously telling other cabinet officials that he planned to fire the F.B.I. director before finally informing Mr. Wray after Election Day that he would allow him to remain, according to administration officials with knowledge of the conversation.

Complicating matters, other national security officials like Secretary of State Mike Pompeo have refused to criticize the president over his incitement of the violence.

The Justice and Homeland Security Departments have also been beleaguered by turnover, complicating their efforts both to investigate the riot and to prepare to secure next week’s inauguration of President-elect Joseph R. Biden Jr.

Former national security officials say that it is standard for the president or a top cabinet official to address the nation soon after a major attack. Without any top administration officials willing to reassure the public or provide a cohesive message about the response to the attack or preventing future violence, misinformation has instead flourished.

Some called the lack of a forcefully communicated public response especially galling in the face of a violent attempt to overthrow the government.

“When the national security of the United States is threatened, it’s vital the nation’s leaders reassure the public that the government is functioning and that anarchy will not be tolerated,” said John B. Bellinger III, a top national security adviser to President George W. Bush after the Sept. 11 attacks and a former Justice Department official.

A spokesman for the F.B.I. declined to comment. But defenders of Mr. Wray and Mr. Rosen said that they were low-key leaders and that Mr. Wray had been reluctant to become the public face of the inquiry because former Attorney General William P. Barr made clear that he was subordinate to Justice Department leaders.

Mr. Cuccinelli sought on Wednesday to reassure the public.

“We will remain on what you might characterize as a more alert status,” Mr. Cuccinelli said. “The inauguration will be safe. I guarantee it.”

Given that Mr. Trump has cowed and even fired national security officials for perceived disloyalty, Mr. Bellinger said it was a good thing that the acting heads of the Justice Department, the F.B.I. and the military “have been willing to act independently from the White House,” even if they have not taken a public posture.

Mr. Rosen and Mr. Wray have also preferred to communicate behind the scenes with others about the investigation. A Justice Department spokesman pointed out that Mr. Rosen spoke with congressional leaders during and after the attack, that he asked lower-level officials overseeing the law enforcement investigation to brief reporters and that his video message was a forceful statement condemning the riots.

Mr. Wray personally gave the leaders a security briefing on Monday, according to government officials. On Wednesday, Mr. Wray and Mr. Cuccinelli led a call with more than 5,000 local law enforcement officials to help them address threats leading up to the inauguration.

The public messaging vacuum by department leaders underscores Mr. Trump’s politicization of federal law enforcement, former officials said, pointing to a lack of any broad effort by the administration to issue warnings about right-wing violence during Mr. Trump’s presidency, in contrast with its promotion of suspicions about leftist extremists.

“I believe the reason so few stepped up to follow normal protocol is also directly related to fear of reprisal from the president,” said Elizabeth Neumann, who served as the assistant secretary of counterterrorism and threat prevention at the Homeland Security Department under Mr. Trump. 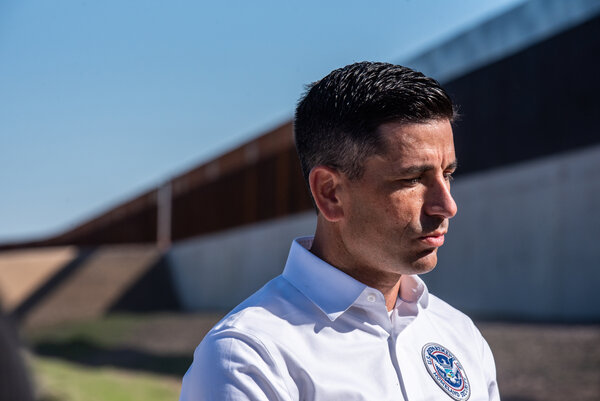 Mr. Trump has also undermined his administration’s own threat assessments on the extremist groups that make up part of his base. The problem was especially acute at the Department of Homeland Security, which was created after the Sept. 11 attacks to improve coordination among national security agencies.

The department was also enduring an absence of leadership even before Mr. Wolf stepped down days after the siege in part, he said, because of court rulings that claimed he was unlawfully appointed to his position. Two of its largest arms, Customs and Border Protection and Immigration and Customs Enforcement, are led by acting officials. The Government Accountability Office also released a report saying Mr. Cuccinelli was illegally appointed to the Homeland Security Department.

Representative Bennie Thompson, the chairman of the House Homeland Security Committee, called the timing of Mr. Wolf’s departure “questionable” given the department’s responsibility to help secure the inauguration.

From Riot to Impeachment

The riot inside the U.S. Capitol on Wednesday, Jan. 6, followed a rally at which President Trump made an inflammatory speech to his supporters, questioning the results of the election. Here’s a look at what happened and the ongoing fallout:

They Prepare the White House for a New President. They Have 5 Hours.

ISTANBUL (Reuters) - Ankara has imposed advertising bans on Twitter, Periscope and Pinterest after they failed to appoint local representatives in Turkey under a new...

A new national residential record could be set if a super penthouse at the top of New Zealand's tallest apartment building sells for around $40...