Rep. Mark Green: This is one of the greatest security risks this nation has ever had, and the State Department doesn’t seem to care at all

The White House said on Friday that the U.S. has temporarily suspended flights of Afghan evacuees into the country after four measles cases among recent arrivals — in a move it described as “out of an abundance of caution.”

“‘Operation Allies Welcome’ flights into the United States have been temporarily paused at the request of the [Centers for Disease Control] and out of an abundance of caution because of four diagnosed cases of measles among Afghans who recently arrived in the United States,” White House Press Secretary Jen Psaki told reporters.

She said that individuals are being quarantined and that the CDC has begun full contact tracing. Additionally, all arriving Afghans are required to be vaccinated from the disease as a condition of entry into the U.S.

The Associated Press had earlier reported that a “”health safety concerns” had shut down flights out of Qatar and Germany. There are nearly 10,000 evacuees at the U.S. military base in Ramstein, Germany.

“All those who had been in contact with the infected person at base have been isolated, and post-exposure prophylaxis and inoculations are in process,” the notice said.

Separately, a senior U.S. government official confirmed to Fox News that officials identified a single measles case as part of what they called a robust health screening process. 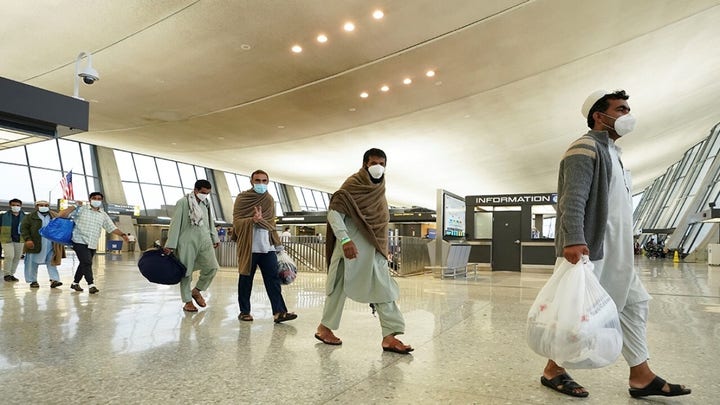 The Centers for Disease Control (CDC) describes measles as a “highly contagious” virus that can be spread by coughing, sneezing, and by people breathing contaminated air or touching infected surfaces and then their faces.

It says that the virus is so contagious that if one person has it, up to 90% of the people close to that person who are not immune will also be infected, and that the virus can live for up to two hours in an airspace even after an infected person leaves the area.

According to the CDC, Afghanistan has the seventh highest number of measles cases in the world.

On Friday, Psaki said that the U.S. is also exploring efforts to vaccinate evacuees while they are still overseas.