New York (CNN Business)The “blue wave” that many expected in November appears to have crested two months later. Now, investors are trying to figure out how to best position their portfolios given the increased likelihood that Democrats will win control of the Senate following Tuesday’s run-off elections in Georgia.

The Nasdaq was down slightly Wednesday morning after Raphael Warnock was declared the projected winner in one of the two Senate races. Fellow Democrat Jon Ossoff is leading the other race but it is still too close to call.
Big tech stocks such as Apple (AAPL), Amazon (AMZN), Google owner Alphabet (GOOGL) and Facebook (FB) were all lower — even as the broader market rallied.

Investors in the sector seem to be worried that the combination of Joe Biden’s White House win and the likelihood of Democrats controlling both houses of Congress may lead to more regulations for big tech firms, higher corporate taxes and increased antitrust scrutiny.
But given the party’s narrow majority in both chambers, it remains unclear if any of this will come to pass.

“The Democrats’ small lead in both the Senate and the House will make it tougher than many believe to pass tax hikes, impose regulation and enact some of the other market unfriendly policies that investors have been worried about,” David Bahnsen, chief investment officer with The Bahnsen Group, said in a report Wednesday. 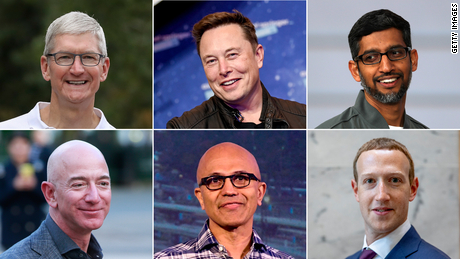 “I suspect the initial market reaction in the tech sector to the Georgia Senate results is more of a growth-into-value story rather than a tech regulation story, as there is arguably greater appetite for Silicon Valley regulation in the GOP,” he added.
But while tech stocks were sliding Wednesday morning, many sectors were surging on hopes of significant legislative and policy changes in Washington.
Cannabis stocks soared, continuing a scintillating rally that first began in November after Biden won the presidential race and several states legalized marijuana for recreational and/or medical use. Investors seem to be hoping the rules will be further relaxed at the federal level as well.
Shares of leading Canadian cannabis companies Aphria (APHA) and Tilray (TLRY), which recently announced plans to merge, rose more than 10% and 15%, respectively. Rivals Canopy Growth (CGC), Cronos (CRON) and Aurora (ACB) also posted double-digit percentage gains.
Investors were betting that the blue wave will lead to a green wave too. Alternative energy stocks rallied, including solar panel maker First Solar (FSLR) and Elon Musk’s electric car giant Tesla (TSLA).
The market also appears to be betting that the new regime in DC might finally be able get a major infrastructure bill passed, which could add jobs and stimulate the overall US economy. 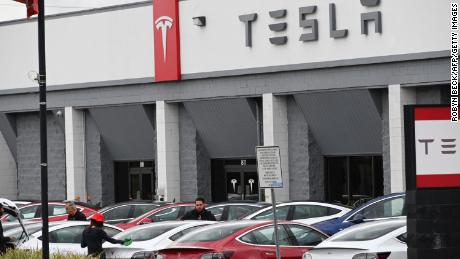 “A Biden honeymoon with a Democratic Congress helmed by Nancy Pelosi and Charles Schumer would likely lead to more fiscal stimulus and infrastructure spending,” Philip Orlando, chief equity market strategist with Federated Hermes, said in a report Tuesday night. “That would serve as a temporary sugar high for stocks in 2021.”

Along those lines, big construction equipment companies Caterpillar (CAT), Deere (DE) and Vulcan Materials (VMC) all rallied as did smaller firms such as Granite Construction (GVA) and US Concrete (USCR).
And the Russell 2000 index (RUT), which includes small cap stocks that have more direct exposure to US consumers than multinational funds that depend more on Europe and Asia, rallied as well, rising 2.5%.
Source: Read Full Article

A Picture and its Story – Protests, rallies and two impeachments: Trump's presidency in photographs

A SEVEN-STOREY building in Madrid has been destroyed in a suspected gas explosion as video shows debris littering the street. The upper-floors of the building...

The leading digital asset is still squeezed inside a correction. Volatility is declining, and the “string” that will push the quotations out of the Triangle...

ECB, European Commission Will Decide on Digital Euro by Mid-2021

The European Central Bank (ECB) today said it’s working with the European Commission in experiments to consider the merits of minting a ‘digital euro.’ The...

Fundstrat strategist David Grider has revelated he believes the price of Ethereum’s ether, the second-largest cryptocurrency by market capitalization, could climb more than sevenfold to...

Cryptocurrency Campaigning is Going Mainstream: How Politicians Use Bitcoin to Win Support

Being a cryptocurrency supporter is something like a trend now. This has triggered politicians to become crypto-friendly to win the support of people. Did it...

Joe Exotic, with limo waiting outside prison, fails to get Trump pardon

More On: Joe Exotic ‘Tiger King’ star Jeff Lowe must turn over cubs due to alleged abuse Joe Exotic’s team so confident of pardon that...

ECB, European Commission Will Decide on Digital Euro by Mid-2021

Cryptocurrency Campaigning is Going Mainstream: How Politicians Use Bitcoin to Win Support