A version of this story first appeared in CNN Business’ Before the Bell newsletter. Not a subscriber? You can sign up right here. You can listen to an audio version of the newsletter by clicking the same link.

London (CNN Business)Every year, Wall Street’s top banks publish lengthy reports laying out what the next year could hold for investors, making predictions for economic growth and the trajectories of stocks and bonds.

Some years, the prognostication is more successful than others. The pandemic has made the exercise particularly difficult. Early estimates for 2020 had to be quickly tossed out as countries around the world entered lockdowns and shuttered their economies. Forecasts for 2021 largely missed the sharp rise in inflation that now dominates discussions.
So what’s on tap for 2022? Wall Street admits that on many fronts, it’s not quite sure.

This just in: Fresh reports from Morgan Stanley and Goldman Sachs note that a significant degree of economic uncertainty remains — particularly when it comes to inflation and how policymakers could respond.

In research published Sunday, Morgan Stanley said it thinks US inflation will move “decisively lower” next year while remaining above the Federal Reserve’s 2% target.

The bank’s team of strategists predicts as its central scenario that the Fed will still hold off on hiking interest rates until 2023. But they can’t be sure.
“The supply constraints that have held back growth and pushed up inflation this year could easily persist or worsen,” its strategists wrote. “In such a scenario, we would have notably weaker growth but higher inflation, and judging from central bank communications, more aggressive policy tightening. Indeed, in that scenario, we see the Fed raising interest rates in the middle of next year.”
And there’s another caveat, too: “Supply constraints, for goods and the labor market, could also revert to normal more quickly than expected.”
Goldman Sachs strategists have a slightly different take. They’ve already said that higher consumer prices — which are increasing at their fastest pace in 30 years — will force the Fed to act sooner.
“The US economy largely followed the rapid road to recovery that we expected this year and is on track to round out the recovery next year as most of the remaining effects of the pandemic fade,” they wrote Sunday. “But this year also brought a major surprise: a surge in inflation that has already reached a 30-year high and still has further to go. Mainly for this reason, we recently pulled forward our forecast of the timing of the Fed’s first rate hike to July 2022.”
Still bullish: Morgan Stanley predicts that the US economy will expand by 4.6% next year after growing 5.5% in 2021. Goldman Sachs expects slightly more muted 3.9% growth in 2022 as activity cools in later quarters.
But their outlooks make clear that inflation — which Goldman thinks “will get worse before it gets better” — is making it difficult to see what’s coming around the bend, even as investors remain euphoric. As we know from the past 20 months, the best practice on Wall Street would be to stay humble.

China’s Xi Jinping gets his pet stock exchange in Beijing 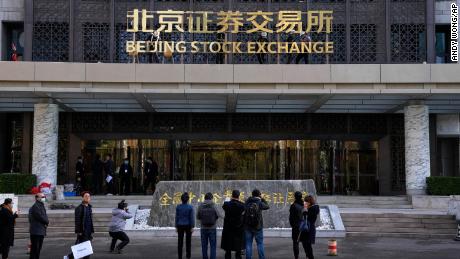 The latest: The first batch of 81 firms started trading on Monday, including 10 initial public offerings from companies in tech and manufacturing, my CNN Business colleague Laura He reports. Shares in those IPOs surged at the open and triggered circuit breakers, before closing with an average price increase of 200%.
Auto components maker Tongxin Transmission was the standout performer, notching an eye-popping gain of 494%. The other 71 companies listed in Beijing were previously trading on an over-the-counter system for companies not listed on China’s premier stock markets in Shanghai and Shenzhen.
Step back: The launch is of strategic significance to Xi’s economic and political vision. This is the first time that a bourse has been set up in Beijing, giving the nation’s capital and political center more influence in the world of business and finance.
It also comes as Xi has been cracking down on some of the country’s biggest tech giants, which had until recently been growing at an almost unbridled pace. The communist leader’s campaign aims to ensure that wealth and capital is not concentrated in the hands of a few industry juggernauts.
Coming up: The project kicked off hours before Xi is due to hold a virtual summit with US President Joe Biden, the first such meeting since Biden took office in January. Investors will be closely watching the talks, which are expected to touch on trade, China’s struggling real estate sector and climate goals, as well as human rights abuses and Beijing’s military buildup in the South China Sea.

An estimated 4.4 million Americans quit their jobs in September — an all-time high — as the sheer volume of available positions empowered workers to have their pick of roles.
Big picture: Workers are quitting in search of better pay or better jobs, representing a fundamental shift in America’s labor market, my CNN Business colleague Anneken Tappe reports.
The trend was particularly pronounced among retail workers and those in food services.
“The pace of people quitting across the labor market is remarkable,” said Nick Bunker, director of economic research at the Indeed Hiring Lab. “But the concentration among a few sectors is eye-popping. Quits are up the most in sectors where most work is in person or relatively low paying.”
That could indicate ongoing fears about the Delta variant in September. But it also speaks to a broader dynamic that is forcing employers to consider boosting pay packages to attract and retain staff.
“Labor now has the initiative, and the era of paying individuals less than a livable wage has ended,” said Joseph Brusuelas, chief economist at RSM US. “This strongly suggests that rising wages are going to be part and parcel of the economic landscape going forward.”