New data from the ABA shows the total number of deferred loans has fallen by almost 70 per cent to around $86 billion, down from a peak of $250 billion in June. 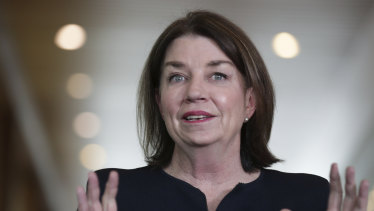 Ms Bligh said it was an "encouraging sign" that the majority of customers had started making repayments but acknowledged many were still struggling. "There are still a lot of people in these numbers who are not yet back on making their payments," she said. "There is a time of reckoning ahead."

The banks coordinated with the government and regulators in March to offer Australians affected by COVID-19 the ability to pause loan repayments for six months. The deferral period was then extended by an additional four months and banks have since ramped up call centres to encourage customers to start making repayments.

Ms Bligh said banks would do "everything they can to keep people in their homes" but ultimately the value of the asset would be degraded by ongoing loan relief.

"For some customers, the best way to secure their financial well-being into the future is not to sink deeper into debt but to get out while they can and start afresh," she said.

Ms Bligh said banks were well placed going into the pandemic which meant they could shoulder the economic impact of the crisis. "If they didn’t have those capital buffers, households and businesses would have absorbed the shock of this event and that would have been catastrophic."

Jefferies senior banking analyst Brian Johnson said the strength of the major bank loan books would be tested once government support is cut off. "There are still risks as that government stimulus gets removed and that’s a big one," Mr Johnson said.

Morningstar banking analyst Nathan Zaia said it was likely many small businesses would not survive once JobKeeper ends on March 28. "There are businesses now that are getting subsidies to pay their own staff and they're also benefiting from sales from consumers who have the support payments," he said. "So they're going to get hit on both fronts. Ultimately there will be a lot of businesses that can’t continue."

CBA this month banned forced home sales for customers affected by the pandemic and Mr Zaia said this tactic would only be used by other banks as a last resort.

"The banks have done a lot to try and buy time so people can get back into work and start making repayments. The last thing they will do is repossess a bunch of properties and throw them on the market all at one."

"Banks understand deeply that earning back trust is a marathon not a sprint, and what they do next year and the year after, will all really matter," she said.