If Russia’s currency is any barometer of its economic condition then it would appear, at face value, that it has weathered the initial storm of the West’s myriad of sanctions. Appearances can, however, be deceptive.

When the West responded to Russia’s invasion of Ukraine with a blitzkrieg of financial and trade sanctions the Russian rouble initially collapsed. At its nadir in March it had imploded from exchange rate of about 75 roubles to the US dollar to almost 150 to the dollar. 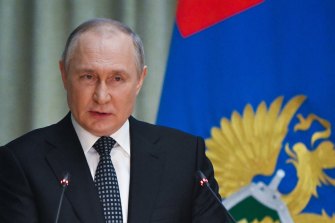 The West is desperate to choke Vladimir Putin’s energy revenues.Credit:Sergei Gubeyev via AP

Since that low, however, it has steadily trended stronger and is now trading at about 66 roubles to the dollar; strengthening to the point where the Russian central bank is now trying to weaken it by cutting its policy rate – which was nearly doubled to 20 per cent when the sanctions were first imposed – three times in recent weeks. The latest cut, from 14 per cent to 11 per cent, was made last week.

Does the rebound in the rouble signal the sanctions aren’t working? Not really.

Russia was shocked when the West did something quite unprecedented and, amid a blizzard of financial sanctions, froze its central bank’s foreign exchange reserves in March.

It responded with the rate hike, capital controls to try to prevent an exodus of foreign currency held within the country and ordered its companies with foreign exchange holdings and earnings offshore to repatriate 80 per cent of them. More recently it has ordered its European gas customers to pay for their gas in roubles.

In effect, it dramatically limited selling of the currency and forced some buying and created something of an artificial, domestic market for the rouble rather than the internationally traded currency that it had previously been.

The sanctions also hit Russia’s imports hard while the surge in oil and gas prices the invasion sparked boosted its exports even though the wide-reaching effects of the financial sanctions chilled demand and has forced it to offer big discounts to those countries, like China and India, attracted by the lower prices and not completely deterred by the sanctions.

The rouble is increasing being driven by Russia’s swelling current account surplus from the combination of the increased value of its energy exports and the forced reduction in its imports.

The challenge for its economic authorities, given the increased reliance on oil and gas revenues – which accounted for nearly half government revenue even before the invasion – is that the rouble has strengthened too far too quickly, which reduces the value of those revenues given that oil and gas sales and trading in the other commodities it exports are denominated in US dollars. 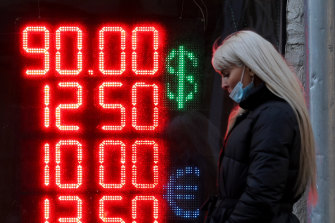 Short of relaxing capital controls and risking a massive flight of capital, however, there may not be much the authorities can do to weaken the rouble and the squeeze a strong currency imposes on an economy and government more reliant than ever on the energy sales to finance the war and to offset the damage the sanctions are doing on the rest of the economy and its own population.

The West, led by the European Union, is trying to choke off those energy revenues. The EU held yet another meeting at the weekend to try to devise a compromise that would overcome the veto Hungary, which is highly dependent on Russian oil, has been exercising. Talks on energy sanctions have been stalled for nearly a month.

The latest proposal is to ban Russian oil delivered into Europe by tankers while allowing pipelined oil (Hungary gets its oil mainly via a pipeline) to continue to be supplied. There are some members of the EU who oppose that proposal because it would give Hungary and others oil materially cheaper than that available to neighbouring states. Even if the EU could find a consensus the sanctions wouldn’t apply until the end of the year.

Russia is paying an increasingly high price for the decision to invade.

The focus is on oil rather than gas (which the EU relies on for about 40 per cent of its needs) is because oil generates twice as much revenue for the Russian government and more than twice the EU’s oil purchases are delivered by sea whereas the gas is predominantly piped in.

It’s easier to arrange and deliver alternate supplies of oil using existing infrastructure than to find a different source of gas and create the logistics to manage its importation and distribute the gas.
Nevertheless, while it might take some time for the EU to agree the framework, some significant limitation of European imports of Russian energy — estimated at nearly $US20 billion ($28 billion) a month — is likely.

Like many of the sanctions and other Western responses to the invasion, the choking of Russia’s economy and cementing its status as a pariah nation, largely cut off from much of the rest of the world, is going to be a slow burn.

The rebound in the rouble should be seen as a largely artificial construct. Beneath the veneer the impacts of the sanctions and the West’s revulsion at the invasion and the methods Russia has been using to prosecute it are slowly ratcheting up.

Deprived of Western technology and expertise even Russia’s oil production volumes are falling.
Its domestic fleet of planes is shrinking because it doesn’t have access to parts or servicing expertise and is being forced to cannibalise the fleet for parts. 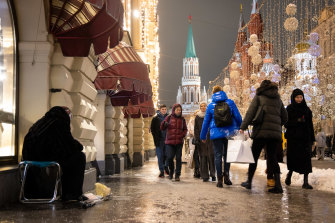 Even without a EU ban on Russia’s oil and, eventually its gas, Russia’s economy and its standards of living are destined to steadily deteriorate.Credit:Bloomberg

Its auto industry has been wiped out by the exodus of foreign manufacturers.

The reliability of telecommunications is being eroded by the bans on components and technology generally is being hurt by the lack of access to semiconductors.

Its ability to replace the tanks and weapons lost in Ukraine is threatened.

Its overall industrial base is shrinking for those same reasons even as the unwillingness of western companies to deal with it impacts more prosaic goods like clothes and furniture.

Russia is being steadily consigned to Soviet-era conditions, where there were shortages of food and goods and its was reliant on poor-quality and technically inferior domestically produced items.

Even without a EU ban on Russia’s oil and, eventually its gas, Russia’s economy and its standards of living are destined to steadily deteriorate.

If the Europeans can get their act together and sanction Russian oil imports – and the key European players are determined to do so — that rate will accelerate. Russia is paying an increasingly high price for the decision to invade.

Israel heads to Nov 1 election with Lapid as caretaker PM