If you see a major corporate acquisition in the headlines today, there’s a good chance it was financed by debt.

That’s because we’re in the middle of a period marked by some of the easiest borrowing conditions in history. Rates have been near rock-bottom levels for the past decade, and companies have been wise to take advantage.

But this seemingly unlimited spigot of capital has led to some potentially negative consequences. And the chorus of experts across Wall Street stressing caution has grown ever-louder.

The focus of their worry is firmly placed on the companies that make up theinvestment-grade section of the corporate bond market. While the debt held by those firms is considered relatively safe and at low risk of default, the group’s overall quality has declined over time.

Read more: ‘The disruptors will be disrupted’: The man who runs the $100 billion SoftBank Vision Fund offers bold predictions for how different the world will look in 10 years

This can be seen by the unprecedented number of bonds sitting on the lowest rung of investment grade: BBB. As of right now, they make up the roughly 50% of the investment-grade market, the biggest share in history. In fact, their presence has doubled in size over the past 10 years. 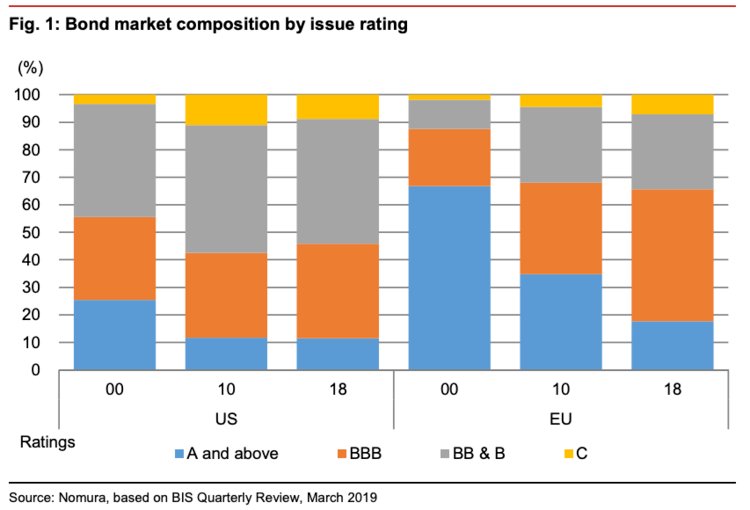 Since that debt is already sitting on the precipice of being labeled high-yield — or junk — it’s especially vulnerable to any shift in market conditions that would make it more difficult to service debt. Whether that change is a simple economic slowdown or a full-blown recession, risks are mounting as the current cycle pushes further into its later stages.

The potential fallout could be swift and punishing. Bonds clinging to their investment-grade status could see their ratings downgraded into junk territory. That, in turn, would make it harder for them to pay back their loans, and possibly even default. Once that happens, bankruptcy might not be too far off.

This swelling portion of bottom-tier investment-grade bonds was actually a hot topic at the recentMilken Institute Global Conference. Whether it was during panel discussions or one-on-one interviews, Wall Street’s foremost market experts were clearly perturbed by the developing — and potentially catastrophic — situation.

Read more: The world’s greatest investors and economists spent much of Milken dispelling 3 key misconceptions. Here’s what they said to set the record straight.

Bryan Whalen, group managing director of US fixed income at the TCW Group, told a panel audience that his biggest fear right now is the debt-to-growth imbalance he sees worldwide.

He highlighted the current debt-to-global-GDP ratio of 220%. In the US, Whalen is focused on the debt-to-Ebitda ratio, which sits at a whopping 46%. According to his analysis, any time that ratio has exceeded 40% over the past 35 years, the high-yield corporate default rate spiked over 10% within 24 months.

“We see a solving of that imbalanced ratio not by growing our way out of it, but by writing down that debt,” Whalen said. “Credit agreements look like Swiss cheese to us.”

Meanwhile,Scott Mather— the chief investment officer of US core strategies at Pimco — had a much simpler take on the precarious situation facing the BBB class of bonds.

“When those tip into junk, it’ll be a mess,” he told Business Insider, lamenting the ” riskiest corporate market we’ve ever had.”

Read more:An investment chief overseeing $100 billion at Pimco says beware of the ‘riskiest corporate market we’ve ever had’ — and offers these strategies for surviving the next recession

So what could ultimately cause a mass exodus from BBB and into high yield? Answers at Milken were mixed, but one common response was some sort of major credit event.

“Wedodged a bullet with PG&E, because they went from investment grade straight into bankruptcy, bypassing many steps,” she told Business Insider. “That kind of large issuer credit event, by definition, could be destabilizing.”

She continued: “We don’t believe there’s any sort of systemic credit risk — there are no imminent debt cliffs — but if you get some sort of high-profile default, that could be something.”

Todd Jablonski, the chief investment officer at Principal Global Investors, agreed that it will take some sort of high-profile event to fully disrupt the bond market. He noted the swelling class of “zombie” companies that levered themselves to the gills when they could, and are now “dated and under assault.”

“You’ll eventually get some exogenous force that could disrupt the Fed and create additional pressure,” Jablonski told Business Insider. “That would lead to default coming out of the high-yield space. We’re underweight high-yield.”

However, none of this directly addresses the elephant in the room: a possible recession. While recessionary cries have softened in recent weeks, it’s still very much a tail-risk scenario for experts across Wall Street.

But don’t expect mass credit-rating downgrades to lead to a recession. If anything, the ticking time bomb in BBB bonds will exacerbate an economic meltdown, not cause one. After all, companies’ ability to pay back the debt in question won’t be affected until the economy is already slowing.

“Eyes wide open, these companies made the choice to increase their leverage levels, which is a different thing than us being hopelessly to indebtedness on an ongoing basis,”Nathan Sheets, the chief economist at PGIM Fixed Income, told Business Insider.

He continued: “That BBB downward ratings migration is more likely to be an amplification mechanism of a recession, rather than a driver of one.”

This is a subscriber-only story. To read the full article, simply click here to claim your deal and get access to all exclusive Business Insider PRIME content.