Westpac director Steven Harker has defended his use of a Samoan superannuation fund that was set up by one of the advisory houses at the centre of a major media investigation into tax avoidance schemes and breaches of anti-money laundering laws.

Mr Harker, a former guardian of the Future Fund, is one of more than 400 Australians identified in a massive data leak of 14 offshore tax advisory firms exposed by the International Consortium of Investigative Journalists (ICIJ) in a global media investigation known as the “Pandora Papers”. 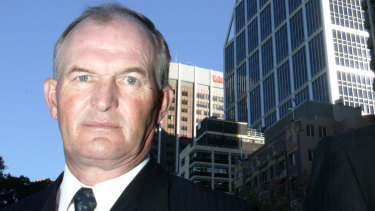 Steven Harker says he has always paid his taxes and disclosed his holdings to his employers and authorities. Credit:Fairfax Media

The ICIJ said the trove of documents exposed the complex business structures being used by scores of billionaires as well as royal families, politicians and celebrities, like Elton John and Ringo Starr, to allegedly hide their affairs from tax authorities. The consortium’s local partners are The Australian Financial Review, the ABC and Guardian Australia.

On Monday, the tax office said it will analyse the trove of secret documents released by the ICIJ to see if it can identify any possible Australian links. “We will certainly look at this data set and compare it with the data we already have to identify any potential connections,” ATO deputy commissioner Will Day said.

Westpac is backing Mr Harker, a former investment banker, who has sat on the board of the country’s second biggest bank since 2019 and is the former long-time managing director of Morgan Stanley Australia from 1998 to 2016. The bank said on Monday, it conducts an extensive range of compliance and regulatory checks before appointing directors and vets them on an ongoing basis. Mr Harker is a member of the Westpac legal, regulatory and compliance committee, the audit committee and remuneration committee.

Mr Harker was a client of Asiaciti, a Singaporean group founded by Australian accountant Graeme Briggs that was one of the 14 firms that had its data leaked to the ICIJ.

He said in a statement prepared by a public relations firm that he had always paid his taxes.

“All appropriate and required disclosures have always been made to authorities and my employers,” he said.

“Transactions from the fund have at all times, been disclosed in my personal, superannuation and family trust tax returns. None of these structures were used to avoid Australian tax at any stage,” Mr Harker said.

“The ATO is fully aware of all my overseas assets and structures and I have never needed to pay any penalties in respect of these assets or income.”

Mr Harker said the fund was set up on his behalf while he was working at Barclays’ investment banking arm (then known as BZW) in the 1995 before he left to work overseas. “As a non-resident I was unable to utilise my domestic Australian superannuation,” he said.

Regarding why the fund is set up in the well-known tax haven of Samoa, Mr Harker said: “Overseas structures in tax neutral countries are designed to reduce the incidence of double tax when investing in global markets which can take years to recover under double tax treaties.”

Mr Harker said the Samoan superannuation fund currently contained cash in the form of US dollars and four long-dated private equity investments that he said cannot be closed until expiry in four to five years.

Asiaciti criticised the investigation by the ICIJ media partners in a statement on Monday. Mr Briggs has not been accused of any wrongdoing. There is no suggestion that Mr Harker did anything illegal.

“The media coverage by the ICIJ and its partners is largely based on illegally obtained information and contains numerous inaccuracies and instances where important details are missing,” it said.

“In many cases the stories published do not represent all the facts or context of a situation. This has led to grossly misleading inferences and conclusions about Asiaciti Trust.”

“In our view, it is clear that they have chosen to portray information in a way that suits a particular narrative.”

The firm said in a statement that all of its work adhered to the highest standards of ethics. “Taxation is a core area of our global expertise. Our advice is always in strict accordance with all applicable laws and regulations.“

Poland to make COVID booster shots available to all adults