New York (CNN Busines)What crypto crash? Bitcoin prices may be plunging, but you wouldn’t know it by checking out the cars on the super popular Formula One racing circuit. F1 is crazy for crypto.

Eight of the 10 teams racing in the high-profile international series have a crypto-related sponsor. F1 has gotten a huge ratings boost in the past few years thanks in part to the popular “Drive to Survive” reality show on Netflix (NFLX).
Crypto.com, a top exchange, has a multi-year naming rights deal for the F1 race in Miami, which was held earlier this month. Crypto.com is also a partner with the Aston Martin F1 team.

The top two teams in F1 so far this season, Red Bull and Ferrari, both announced new crypto sponsorship deals in the past few months. Ferrari (RACE) is working with blockchain company Velas while Red Bull has a deal with cryptocurrency exchange Bybit.

Other leading F1 teams are taking the crypto plunge too. McLaren has a long-term deal with OKX that makes the crypto exchange the leading sponsorship partner for the team.

“We’re not just putting our logo on McLaren cars. We’re helping Mclaren with NFTs and the metaverse,” Haider Rafique, global chief marketing officer for OKX, said in an interview with CNN Business.
OKX is the only crypto company that serves as the lead sponsor for an F1 team. That means its logo is displayed more prominently on the cars and racing suits of McLaren drivers Lando Norris and Daniel Ricciardo.

“Crypto is a massive industry. It is clearly here to stay and is a big part of the economic future,” said McLaren Racing CEO Zak Brown. “Crypto fans are savvy, technology-focused consumers.”

Younger drivers and fans are big proponents of crypto

Brown said the partnership between McLaren and OKX is a good fit because many of the new, younger fans of F1 who have embraced the sport after watching “Drive to Survive” are also into crypto.
The Netflix bump for F1 has clearly caught the attention of other crypto companies.
“There has been an exponential increase in interest in the sport. I’m a Netflix F1 adoptee, so for us it was a simple decision to get involved with a team,” said Lou Frangella, vice president of partnerships at FTX US. FTX, a top crypto brokerage that is currently valued at $32 billion, inked a deal with Mercedes last year. 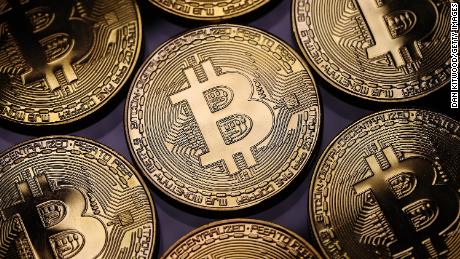 Frangella said FTX, which also has a stadium sponsorship deal with the NBA’s Miami Heat, is looking to make a name for itself with younger consumers.
As a tie-in to the Miami F1 race, FTX auctioned off NFTs of artwork featured on the cars of drivers Lewis Hamilton and George Russell. FTX also created limited edition NFT ticket stubs for the race designed by NFT artist Mad Dog Jones. Jones previously designed a helmet for Hamilton, a seven-time F1 champion.
“We are trying to make the partnerships fun and engaging,” Frangella said.

Concerns about overspending and the environmental impact of crypto

Still, the crypto sponsorship binge could end badly, much like it did for the many now defunct dot-coms that spent aggressively on Super Bowl ads and stadium naming rights deals in the late 1990s and early 2000s.
OKX’s Rafique said the recent volatility in cryptocurrencies is to be expected given how new the asset class is compared to stocks, bonds and commodities. He also noted that it’s not as if stocks have been a safe haven this year.
“Equities are getting hit hard too. We’re taking the long term view,” he said, noting that McLaren hasn’t expressed any concerns about the price drops of cryptos since announcing their partnership.
McLaren’s Brown added that he is “quite fascinated and excited about crypto” and that he personally has invested in a diversified portfolio of cryptocurrencies. Drivers Norris and Ricciardo are also proponents of crypto, Brown said.
The environmental impact of crypto mining, which is extremely energy intensive, remains a concern. Some drivers have already begun to openly question the impact flying around the globe to drive gas-guzzling race cars is having on the planet. Aston Martin’s Sebastian Vettel, a four-time F1 champ, recently talked about his reservations due to climate change concerns.

FTX’s Frangella acknowledged that there are legitimate questions about crypto mining and the sport of racing and the environment. F1 has previously said that it hopes to be a carbon neutral sport by 2030.
“Sustainability is important to us and we’re all looking for improvement,” Frangella said. “From a crypto perspective, we are very conscious of that and we have these conversations with the Mercedes team. We hope that people will be pleased with improvements in the years to come.”
Source: Read Full Article

Israel heads to Nov 1 election with Lapid as caretaker PM