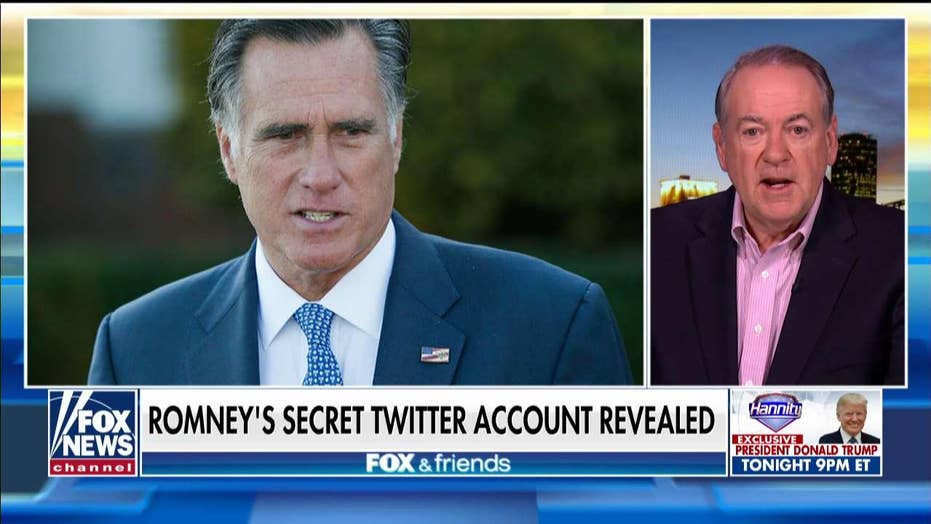 “Having fake twitter accounts on social media: that’s the work of kids, cowards, couch potatoes, and perverts like Carlos Danger. … If he's got something to say, man up and say it,” the Fox News contributor told “Fox & Friends.”

A writer for The Atlantic who wrote a profile on the Utah Republican and his tense relationship with the president asked Romney about the mystery Twitter account. He said Romney responded in the affirmative: “C’est moi,” which in French means "It's me."

Many took to social media to make fun of the name, which is somewhat reminiscent of disgraced former congressman Anthony Weiner's alter-ego, Carlos Danger. Seth Abramson, a writer for Newsweek, took to Twitter to joke, “Stop me if you heard this one: Pierre Delecto, Carlos Danger and John Barron walk into a bar…”

Romney took a series of shots at President Trump in an interview that aired Sunday, saying that some of the president’s rhetoric appealed to racism and claiming that under his leadership, the U.S. was abandoning allied Kurdish fighters in Syria.

“Let us all realize that this guy is not a team player. He’s still bitter because Donald Trump got elected and he didn’t,” Huckabee said, adding he's "embarrassed" for Romney.

He called on Romney to "get over it" and "start embracing" that the United States is facing a "binary choice" in 2020 between capitalism and socialism.

U.S. candidate Bloomberg vows to back Israel, takes dig at Sanders
We and our partners use cookies on this site to improve our service, perform analytics, personalize advertising, measure advertising performance, and remember website preferences.Ok