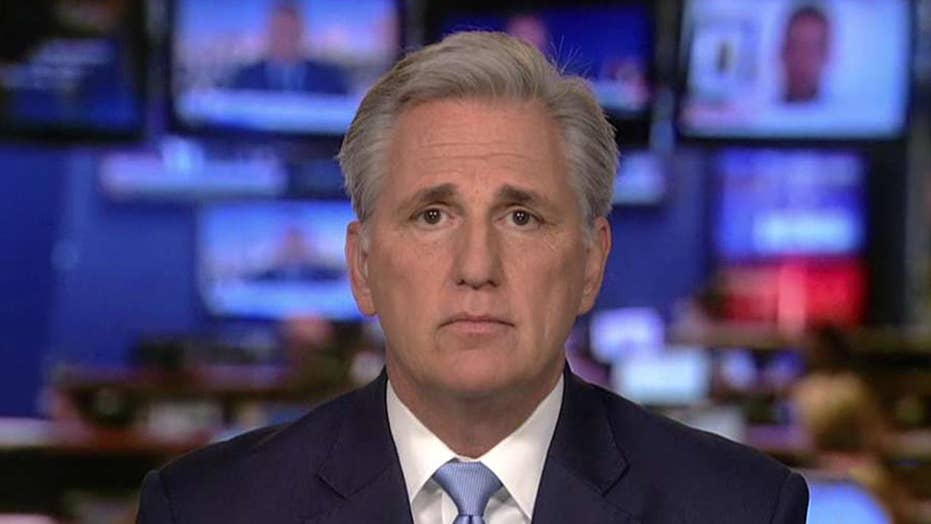 House Minority Leader Kevin McCarthy, R-Calif., said former Vice President Joe Biden should pledge not to campaign during the Senate impeachment trial of President Trump in the event that House Speaker Nancy Pelosi, D-Calif., held on to them in order to help his 2020 presidential bid.

McCarthy told "Hannity" on Monday that there could be a number of reasons why Pelosi held onto the impeachment articles for three weeks before promising to transmit them to the Senate.

He pointed to Sen. Bernie Sanders' loss in the 2016 Democratic presidential sweeps, pointing to the use of superdelegates and allegations of unethical behavior against then-Democratic National Committee Chairwoman Debbie Wasserman-Schultz, D-Fla.

"Wasserman-Schultz had to resign the night before the convention because they got caught cheating."

To that extent, McCarthy claimed Pelosi may be trying to aid Biden or hurt Sanders — the latter of whom is much farther to the political left than the party's mainstream.

"What this does," he said of the impeachment delay, "[is] it harms every senator running for president with Iowa being February 3rd — and benefits Joe Biden."

He noted that Biden, a former Delaware senator, is the only one of the top tier of primary candidates not currently in office. Sanders and Sen. Elizabeth Warren, D-Mass., both would likely have to be present for a Senate trial regardless of whether they are active presidential candidates.

"Joe Biden should actually make a pledge not to campaign while impeachment is on, if he believes in fairness and that Nancy Pelosi didn't do this for him."

Another potential reason why Pelosi waited to forward the articles may be because she has a "weak case," according to McCarthy.

McCarthy also objected to Democrats' claims the Senate must call more witnesses to testify in the impeachment trial.

"No, [senators] are the jury. They can't have cell phones, they can't talk to one another. They can't raise questions. They write their questions down. Just like anyone who has ever served in a jury box. It is not their case in a jury box to say, oh, I want to call some other witnesses," he told host Sean Hannity.

However, he said that Democrats have problems when it comes to being unbiased jurors — not Republicans.

"One thing that wouldn't happen in America, you have people in this jury box who already made a decision on this case. Like Kamala Harris," he said of the California Democrat.

"She said back in October that she would impeach the president, vote for it, before he was even impeached in the House. In any jury [selection], she would be kicked out."