London (CNN Business)One of the hottest corners of financial markets is getting slightly less manic.

What’s happening: Billionaires, celebrities and athletes have raced to create special-purpose acquisition companies, or SPACs, over the past six months. These “blank check” firms, which raise money from investors and then go hunting for takeover targets, have been flagged as a sign of overexcitement on Wall Street.
New scrutiny of SPACs from regulators appears to be forcing a cooldown, however. Last week was the first time all year that no new SPACs hit the market, according to Renaissance Capital. 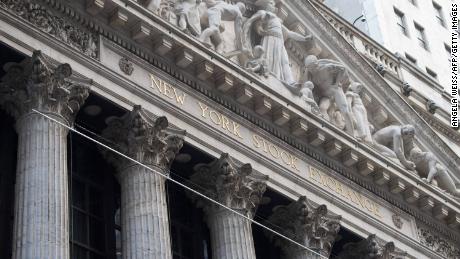 “Over 250 SPACs are on file so we’re not calling the end, but investor enthusiasm for this vehicle is waning,” cofounder Bill Smith told clients.

In a research note published last week, Goldman Sachs analysts noted that issuance has “screeched to a halt” in April, with only six new SPACs created so far in the second quarter. This time last quarter, 55 fresh SPACs had made their debut.

The investment bank, which called the slowdown “warranted,” said recent announcements from regulators have hurt sentiment. In late March, the Securities and Exchange Commission issued a statement expressing concerns over disclosures and governance related to SPACs. Earlier this month, the agency indicated it would tighten some accounting standards.
The mood has been tough for shares of SPACs that have already listed. Like other risky assets, they’ve been hit by turmoil in the bond market, where yields are rising thanks to inflation concerns.
See here: The Defiance Next Gen SPAC Derived ETF, which tracks more than 200 US-listed SPACs that are both pre- and post-acquisition, is down more than 15% in the past two months. The S&P 500 has increased more than 9% over the same period.
That could hurt individual investors that have piled in this year with hopes of cashing in on the craze. Short selling, where investors place bets that pay out if stocks fall, has increased as SPAC shares have suffered, according to data from S3 Partners.
“We are seeing active short selling … as stock prices in the sector decline,” analyst Ihor Dusaniwsky said in a recent research note.
Big picture: The massive wave of SPACs has been fueled by low interest rates and stimulus spending. It has also triggered alarm bells among market watchers, and many had been stressing that a break was needed.
“There has been so much SPAC activity that the market was getting indigestion,” Duncan Davidson, general partner with venture capital fund Bullpen Capital, recently told my CNN Business colleague Paul R. La Monica. “We need a pause.”
Even if the creation of new SPACs stays light, the hundreds already in existence will continue to have a serious impact on the market.
Goldman Sachs estimates that SPACs could drive a $900 billion wave of mergers and acquisitions in the next 24 months, with $129 billion of capital currently searching for target companies.

Corporate earnings are coming in even better than expected

A quarter of companies in the S&P 500 have reported earnings for the first three months of 2021 — and the results have come in even better than Wall Street was expecting.
The latest: So far, 84% of companies have reported profits that beat forecasts, according to FactSet. That could make this one of the top quarters since analysts at the research firm started tracking this metric in 2008.
Earnings growth to date has come in at nearly 34%, the highest rate since the middle of 2010. Analysts expect double-digit growth to persist for the remainder of 2021.
Companies are helped by comparisons to an awful 2020, when revenue and profit plunged as the pandemic battered demand. But the economic recovery is also a major factor.
“The bar was higher coming into this earnings season and you have to hand it to corporate America, they have cleared that high bar with relative ease,” LPL Financial Chief Investment Officer Burt White said in a recent note to clients.
Investor insight: FactSet’s John Butters notes that investors are offering reduced rewards for good performance. Companies that have beat estimates are seeing shares increase by an average 0.4%, as opposed to 0.8%.
But there are hopes that a spate of Big Tech earnings this week could give markets a boost, especially as discussions of higher capital gains taxes on the wealthy rattle Wall Street.
Google parent Alphabet (GOOGL), Microsoft (MSFT), Apple (AAPL), Facebook (FB) and Amazon (AMZN) are all due to report. These companies are among the biggest stocks in major indexes.

Prepare to pay sticker price for a car

Car dealers have only a fraction of the vehicles, new and used, that would typically pack lots. That’s helping send prices to record levels, my CNN Business colleague Chris Isidore reports.
The average price of a new car was $37,200 in the first three months of the year, according to JD Power — up 8.4% from the same period just a year ago.
About half of car buyers are paying within 5% of the sticker price, according to JD Power stats, while some are paying even more. Meanwhile, wholesale prices for used cars sold at auction are up 26% since the start of this year. Retail used car prices are up 7% in the same period.
“That puts wholesale used prices at the highest level they’ve ever been,” David Paris of JD Power said. “And we are seeing used retail prices accelerating rapidly.”
It’s a 180-degree turnaround from a year ago, when many car dealerships were closed by the pandemic or limited to providing service and maintenance. Massive job losses and a shift to working from home caused a 30% plunge in auto sales, the biggest quarterly decline since the Great Recession. Now sales are booming again — but auto plants around the globe are closed or running at reduced capacity due to a computer chip shortage.
New car production in North America is down about 3.4 million vehicles in the first three months of this year, according to Cox Automotive. The used car market is just as tight, with some measures of supply and demand in the sector showing the greatest scarcity on record.
That can only mean one thing: Consumers have to start paying more.

Albertsons reports results before US markets open. Tesla (TSLA) follows after the close.