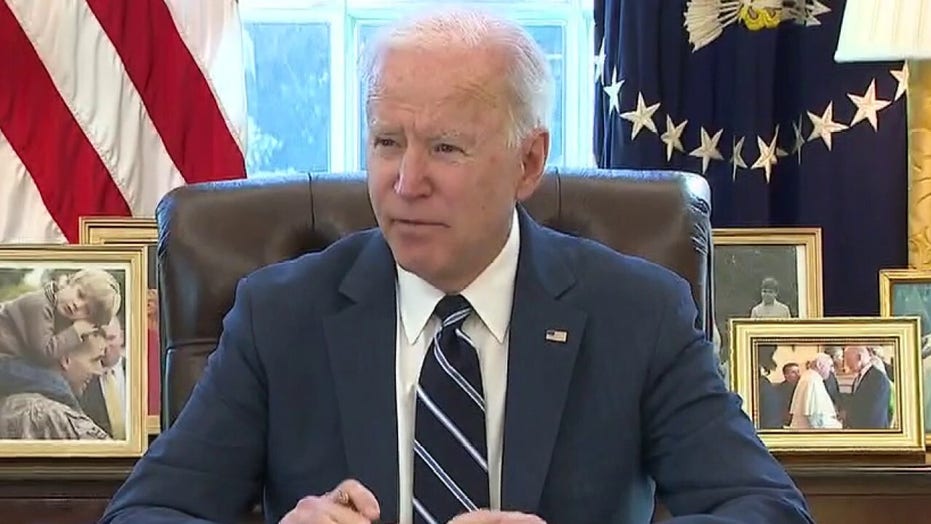 Voters have mixed views over whether the White House is proposing too much government spending, and a growing number think President Joe Biden is too liberal.

Forty-six percent say Biden is too liberal, up from 36 percent who felt that way the last time the question was asked in December 2019.  Another 40 percent say his positions are about right and 10 percent feel he’s too conservative.  While most Democrats (69 percent) say Biden is about right on the issues, one in six see him as too liberal — 16 percent, up from 9 percent. 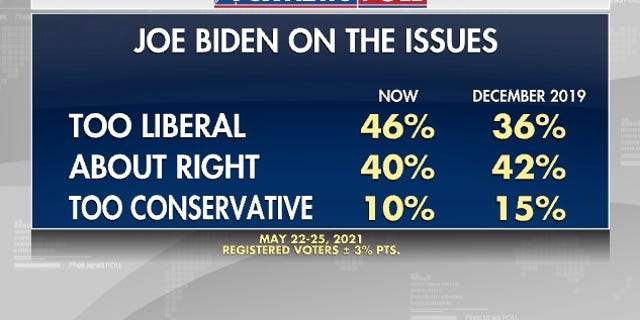 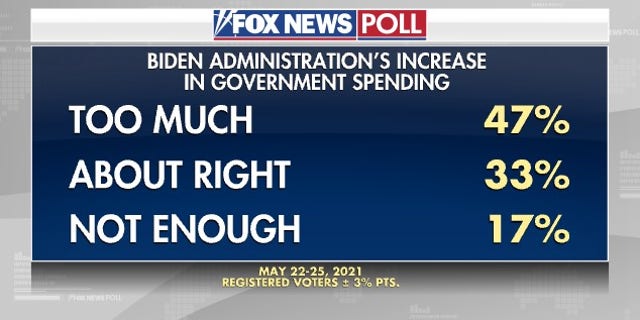 “Half of voters either approve of Biden’s spending or want more, while about the same portion say it is too much,” says Democratic pollster Chris Anderson, who conducts the Fox News poll with Republican Daron Shaw.

“Like so many things in America today, views on the appropriate level of stimulus spending divide sharply based on political affiliations.”

Seventy-nine percent of Republicans think Biden’s spending is too much, compared to 42 percent of independents and 18 percent of Democrats.

Forty-four percent believe the administration’s proposals are truly meant to “jumpstart the economy,” while slightly more, 47 percent, think they are intended to “transform the country with liberal social policies.” 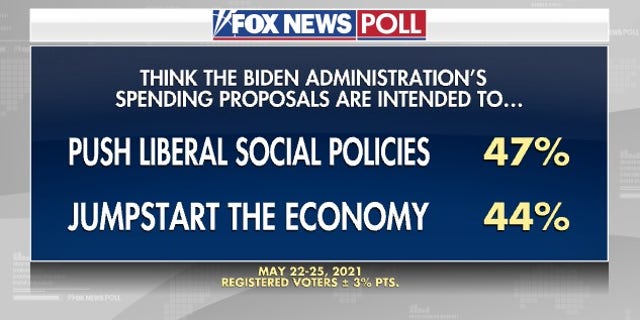 Overall, 51 percent feel optimistic about the economy, down from 57 percent (June 2019).

Shifts in partisan sentiment reflect the change in the White House. Optimism among Republicans plummeted 59 points since 2019, from 87 percent to just 28 percent today.  Among Democrats, optimism has more than doubled, going from 35 percent to 77 percent now. 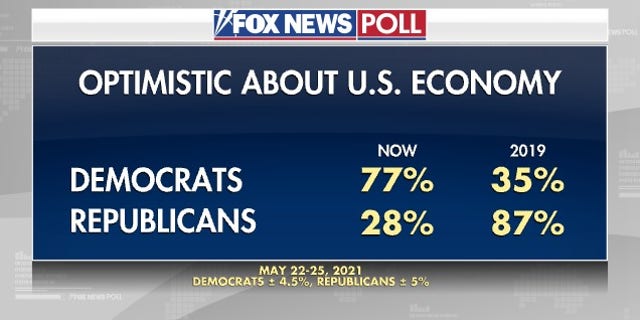 Meanwhile, most Democrats (74 percent) say the aim of Biden’s spending is to help the economy, while most Republicans say it is to change the country (79 percent).

The economy is the top issue to voters, and by a 51-46 percent margin they approve of how Biden is handling it, for a net positive of 5 points.  That’s much better than his ratings on immigration (-19 points), border security (-16), and foreign policy (-9).  He also gets positive marks on the environment (+13), health care (+12), and race relations (+6) — but none of those comes close to his +30 approval on handling the coronavirus pandemic.

That gives Biden positive ratings on three of the four issues that voters say are the most important facing the country today.  Here’s how they rank them:  the economy (23 percent), coronavirus (19 percent), border security/immigration (13 percent), and race relations (10 percent). 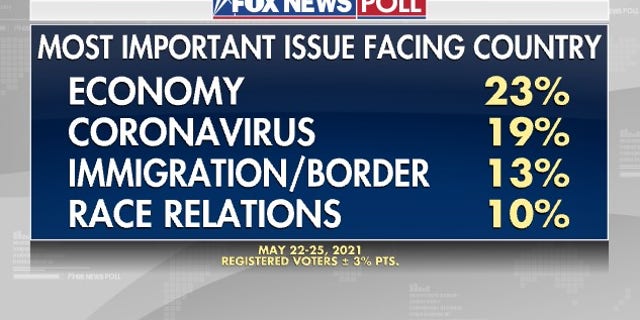 Most voters are still satisfied with their choice in the 2020 presidential election, including 91 percent of Biden voters and 92 percent of Trump voters.

More voters say socialism is a major threat to the stability of the U.S. today.  The latest Fox News poll finds 49 percent feel that way, up from 39 percent in 2019.  That shift comes from increases across the political spectrum:  independents (+17 points), Republicans (+11), and Democrats (+4).

What do voters see as the biggest threat?  Sixty-four percent say political divisions are a major threat, edging out unemployment (61 percent) and decaying infrastructure (59 percent).  Those are also the only three issues that majorities of Democrats and Republicans both agree are major threats. 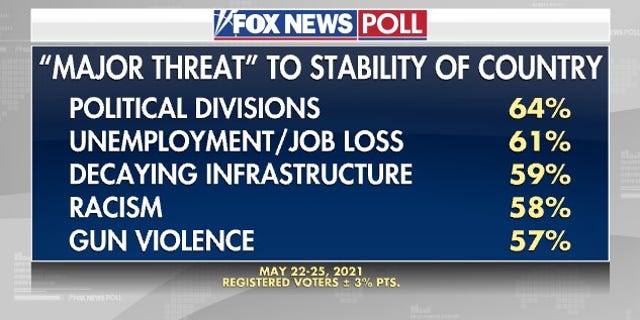 The share seeing coronavirus as a major threat is down 12 points from 67 percent a year ago.

Conducted May 22-25, 2021 under the joint direction of Beacon Research (D) and Shaw & Company (R), this Fox News Poll includes interviews with 1,003 randomly chosen registered voters nationwide who spoke with live interviewers on both landlines and cellphones.  The total sample has a margin of sampling error of plus or minus three percentage points.

Dow drops 400 points, on track for worst week since January

Businesses fret as Canada extends ban on travel with U.S