An EISS Super director is under investigation for sharing confidential board documents with the aligned union, a parliamentary committee has revealed, as the new chair refuses to apologise for mounting governance problems at the troubled energy industry super fund.

EISS Super was hauled before the government’s economics committee on Monday, after The Age and Sydney Morning Herald reported its members’ retirement savings had been spent on lavish staff parties, overseas junkets and questionable sponsorship deals. 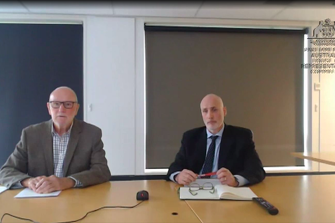 The reports came after the $6 billion superannuation fund was named one of the country’s 13 worst performing funds by the Australian Prudential Regulation Authority and caused the chief executive, chair and three directors to resign.

During the hearing, Liberal MP Jason Falinski asked newly appointed chair Peter Tighe whether any directors had been investigated for failing the corporate regulator’s ‘fit and proper test’, which measures qualities including good character, diligence, honesty, integrity and judgment.

Initially, Mr Tighe said he was “unaware” of any investigations. “Are you aware of any director who shared board documents with a union?” Mr Falinski asked.

“There was an issue in relation to documents being sighted by a shareholder that may have been provided by a director. And there has been a process put in place to investigate that because those documents are confidential to board discussions,” Mr Tighe responded. “I understand the documents might have been sighted by the ETU [Electrical Trades Union].”

Mr Falinski had been contacted by a whistleblower earlier in the day, who claimed EISS director Matthew McCann was the subject of that investigation. Mr McCann represents the ETU on the fund’s board and sits on its audit and remuneration committees. EISS declined to comment.

Former committee chair Tim Wilson called the hearing after he described expenses, including $20,000 annual payments to two surf clubs neighbouring former chief executive’s home, as “verging on corruption” and “scandalous”. The fund has since been exposed to bankroll an office upgrade while negotiating a merger that would potentially change its headquarters and forking out more than $100,000 for a luxury BMW for the former chief executive.

The revelations came as EISS was negotiating a merger with TWU Super, which Mr Tighe said was being re-evaluated by the board.

“You guys have had a busy two months. It’s been revealed staff costs have doubled over the last seven years, you’re one of the worst performing funds available for investors … You’ve lost four directors and a CEO. I’m just wondering, would you like to apologise to your members?” Mr Falinski said.

Mr Tighe said he did not need to apologise, as there were “no decisions made at a board level that have not been in the bests interests of members”.

“I think the fund has delivered well to its membership base. I don’t believe we need to make an apology for the programs and processes we put in place,” Mr Tighe said.

“It is your evidence to this committee that you do not see a conflict where members’ money was spent on a donation to a charity, where your manager of that area previously worked and that within six months the CEO’s wife took up employment?” Mr Falinski said.

Mr Tighe said all sponsorship deals were assessed to benefit members through advertising, adding the charity’s employment decisions were not a matter for EISS.

“It could be unusual, I’ll accept that. But when you talk about conflicts, if something arises after the event, I don’t see how that would be relevant to the memorandum of understanding that’s been signed,” Mr Tighe said.

EISS was also hit with allegations of fostering a “toxic” corporate culture and was forced to hire external solicitors WorkDynamic this year to conduct a three-month investigation into bullying complaints lodged by former head of people and culture Lisa Elias against senior management. The fund claims many allegations were unsubstantiated but has not released the findings.

Responding to questions issued by Mr Wilson, EISS said 13 non-disclosure agreements had been issued to exiting staff since 2012. “Nobody signs an NDA unless they’re getting some kind of payment,” Liberal MP Celia Hammond said, before asking for a breakdown of why the NDAs were signed.