London (CNN Business)Markets have reached a new milestone in the middle of a bruising pandemic, another sign that investors have been more than willing to look past short-term pain toward better days ahead.

What’s happening: The Dow topped 30,000 points on Tuesday for the first time ever, a symbolic win for the market bulls that have bet risky assets like stocks can keep pushing higher.
“Although 30,000 isn’t much different than 29,999, there is something special about those big milestone numbers,” said Ryan Detrick, chief market strategist for LPL Financial. “This is yet another reminder of how far stocks and the economy have come since the depths of March.”

How far is that, exactly? The Dow has rallied nearly 62% since it bottomed out on March 23, when it stood at 18,592 points.
What’s happened since then:

These factors have paved the way for a hope-fueled rebound as Wall Street looks ahead to next year, when corporate earnings that have taken a hit are expected to bounce back.
“We believe that the stimulus measures we have seen since the start of the pandemic together with the economic recovery will support financial assets, equities in particular, in the year ahead,” Michael Strobaek, global chief investment officer at Credit Suisse, told clients this week.
Credit Suisse sees 2021 earnings beating those from 2019, helping to justify high stock valuations.
On Tuesday, a post-election bump after President-elect Joe Biden named key members of his Cabinet — including news that former Federal Reserve Chair Janet Yellen would be tapped as Treasury Secretary — was enough to push the Dow past 30,000.
But the big question is whether Wall Street, in fixing its sights on the second half of 2021, is ignoring the potential for bumps in the road in the coming months.
Vaccine distribution is a notoriously tricky business that will involve an unprecedented degree of global coordination. And in the meantime, the coronavirus situation is only getting worse.
More than 2,100 Covid-19 deaths were reported in the United States on Tuesday, the highest single-day death toll since early May. Public health officials are worried that household mixing during Thanksgiving week will only make matters worse.

Tesla is now worth more than $500 billion

Tesla’s spectacular stock rise has been one of the biggest market stories of the year. And the company’s shares show no signs of losing steam.
The electric carmaker’s stock climbed more than 6% on Tuesday, putting its total market value above $500 billion for the first time, my CNN Business colleague Clare Duffy reports. Tesla’s market cap rose to more than $526 billion by the time US markets closed.
Big picture: Tesla — which has seen shares rally a whopping 564% this year — is now worth more than the combined market value of most of the world’s major automakers: Toyota, Volkswagen, General Motors, Ford, Fiat Chrysler and its merger partner PSA Group.
CEO Elon Musk is also getting richer. He’s now worth $136 billion, according to Bloomberg. That makes him the second richest person in the world, behind Amazon CEO Jeff Bezos and ahead of Microsoft co-founder Bill Gates.
Driving the rally: Tesla is having a good year. It’s now been profitable for five straight quarters, a first in its 17-year history. And the company will be added to the benchmark S&P 500 in December, a sign of its acceptance by the Wall Street mainstream after years of skepticism.
Goldman Sachs estimates that when it joins the index, the stock will be the eighth largest constituent.
But for now, enthusiasm for Tesla doesn’t match the company’s actual output. A struggling Toyota still expects to sell 9.4 million vehicles in its current fiscal year, while Tesla is targeting 500,000 deliveries.

Has BlackRock gotten too big?

BlackRock (BLK), Vanguard and State Street (STT) manage a stunning $15 trillion in combined assets, equivalent to more than three-quarters the size of the US economy. 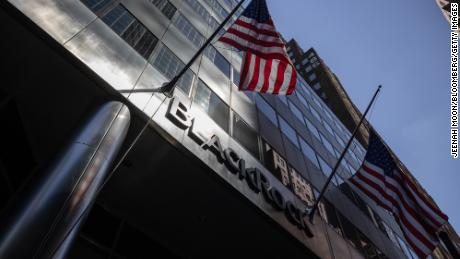 The rapid growth of the Big Three fund managers, driven in part by the rise of dirt-cheap exchange-traded funds, or ETFs, gives them enormous sway over financial markets and the priorities of Corporate America, my CNN Business colleague Matt Egan reports.
BlackRock, State Street and Vanguard have significant investments in a huge swath of S&P 500 companies, according to a paper published this week by the American Economic Liberties Project, a group that launched in February to take aim at what it sees as excessive corporate power.
See here: The Big Three hold leading stakes in companies including Apple (AAPL), JPMorgan Chase (JPM) and Pfizer (PFE).
Critics say BlackRock, Vanguard and State Street have become too powerful and that the Biden administration and Congress need to rein them in.
“The solution is to go straight at the concentration problem by limiting their market share,” Graham Steele, who wrote the American Economic Liberties Project paper, told CNN Business. The paper calls for effectively breaking up the Big Three by revamping Dodd-Frank, the 2010 Wall Street reform law.
Steele, a former staffer at the Federal Reserve Bank of San Francisco who’s now director of the Corporations and Society Initiative at Stanford Graduate School of Business, said he’s hopeful the Biden administration will study potential solutions. But he acknowledged the Big Three will fight back, adding: “They won’t take it lying down.”

Initial US unemployment claims for last week arrive at 8:30 a.m. ET. They’re expected to come in at 730,000, down slightly from the previous week.
Also today:

Coming tomorrow: US markets are closed for Thanksgiving. For our Americans friends — happy eating, and be safe.
Source: Read Full Article

Short squeezes: Everything you need to know about the recent investing movement

Indian shares close at over one-month low as IT, consumer stocks weigh

A pet ferret has made a "miraculous" recovery after sneaking into his owners' washing machine and going through a full 100-minute cycle. Two-year-old Bandit was...

Denver has not seen a lot of snow during the month of January. While the metro has added up a few inches of accumulation, the...

LISTEN TO ARTICLE SHARE THIS ARTICLE Bob Dylan was supposed to spend the summer of 2020 on tour, winding his way from the Les Schwab...

A Taiwanese hardware company has warned its clients about a targeted crypto mining attack against their storage devices. The malware infects NAS devices connected to...

1INCH Price Next Stop at $12? The native token of 1Inch exchange, 1INCH price recently received a major boost, which resulted in a huge spike...

Biden makes a big pledge on climate action, and the Capitol Police union reveals more about the Jan. 6 casualties. It’s Thursday, and this is...