The man who collapsed in the witness stand at the banking royal commission and was carted away by an ambulance has been accused by the corporate watchdog of misleading clients at his financial services firm, Dover Financial.

Looking healthy and bulked up, Terry McMaster fronted the Federal Court to face allegations brought against him and his former company Dover Financial by the Australian Securities and Investment Commission over its use of a controversial client protection policy. 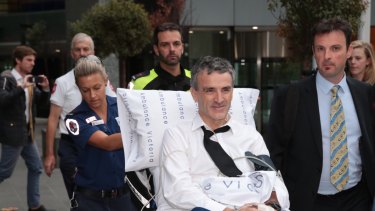 Terry McMaster leaves the Federal Court with the aid of paramedics after collapsing while being questioned.Credit:AAP

Dover’s client protection policy shot to prominence during the banking royal commission when it was described as 'Orwellian' by counsel assisting the commission, Mark Costello.

Nearly 20,000 financial planning clients received the policy from Dover between 2015 and 2018.

Mr McMaster was flanked by supporters, including his brother Adrian McMaster, as he sat in the back row of the courtroom. Ahead of the hearing beginning, he was asked to turn off his phone by his own lawyers after taking a call in court.

ASIC alleges Dover misled and deceived clients by asking them to agree to the client protection policy which ASIC alleges stripped Dover’s clients of most of their rights including any recourse against Dover or one of its clients as a result of misconduct.

ASIC also alleges Mr McMaster was knowingly concerned in the conduct of Dover in relation to the client protection policy.

The corporate watchdog laid out its case against Dover and Mr McMaster during the first day of the two-day trial on Wednesday.

“If we prove our case against Dover the rest will follow, that’s abundantly clear,” Bernard Quinn, QC, counsel for ASIC told the court.

Dover’s protection policy stated in its introduction section that it was “designed to ensure that every Dover client get [sic] the best possible advice and the maximum protection available under the law”. 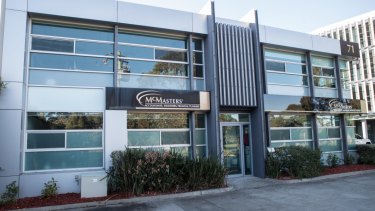 However, ASIC alleges it was designed to burden clients with the potential liability for losses caused by negligent or inappropriate advice.

Mr Quinn said the ASIC case centred on the introductory statement because it included "the mis-statement that the clauses provide the maximum protection under the law.”

Mr Quinn said there were questions about “the inaccuracy of the introductory statement that the policy gives maximum under law”.

Elements of the client protection policy was also included in the statements of advice given to Dover's clients.

In late June, Dover's closed its doors after ASIC accepted a court enforceable undertaking that Dover would cease operating and apply to cancel its Australian Financial Services licence. Mr McMaster also undertook to remove himself permanently from the financial services industry.

The court heard on Wednesday that documents from Dover showed the policy was introduced to Dover’s clients in 2015, to resolve the “messy” additional requirements on Dover under the Corporations Act.

Yet Mr Quinn said the client protection policy was amended to state that Dover’s practices “do not comprise churning and are in your best interests and are appropriate for you”.

ASIC is seeking declarations from the court that Dover and Mr McMaster breached the Corporations Act by misleading its clients and penalties that the court deems appropriate.

Dover and Mr McMaster are defending the case. Both are represented by high profile silk Jeff Gleeson, QC.