Some US IPOs at risk amid China’s tech crackdown: Rep. Dan Meuser

Rep. Dan Meuser, R-Penn., on the impacts of China’s crackdown on technology.

China's crackdown on its premiere ride-hailing platform, Didi Global Inc., should serve as a warning to other firms such as Tesla, analysts say.

"The regulations around autonomous driving in China should get stricter over time and may present some increasing challenges to foreign automakers in the years ahead," Morgan Stanley analyst Adam Jonas wrote in a note Tuesday. Jonas warned that Tesla could face similar issues in China, given its mapping and artificial intelligence technology.

Just days after Didi's initial public offering in the U.S., Chinese Communist Party regulators cut off the firm's ability to sign on new users and then followed up by having it booted from app stores over alleged cybersecurity concerns. The government's moves kicked the legs out from under Didi's Wall Street debut, sending the firm's share price into a downward spiral and sparking lawsuits from investors.

DIDI SHARES DROP AFTER CHINA BANS IT FROM APP STORES

China's targeting of Didi also, in turn, sent up red flags to rideshare and autonomous vehicle companies doing business in China – and a reminder to investors.

The CCP imposed fines on Alibaba, the behemoth founded by China's richest man, Jack Ma, to the tune of $2.8 billion earlier this year. In 2020, China stopped the U.S. IPO for Ant Group – a firm where Ma was the largest shareholder – after a speech he made calling for financial regulation reform apparently offended Chinese officials. Ma also went missing for roughly three months starting in late 2020, sparking rumors that he had been detained or even killed by the Chinese government.

"China is a very authoritarian society," Rep. Dan Meuser, R-Pa., told FOX Business' Neil Cavuto on "Cavuto: Coast to Coast" on Wednesday. "They make their rules. What they give, they can easily take away. We saw that with the Didi IPO." 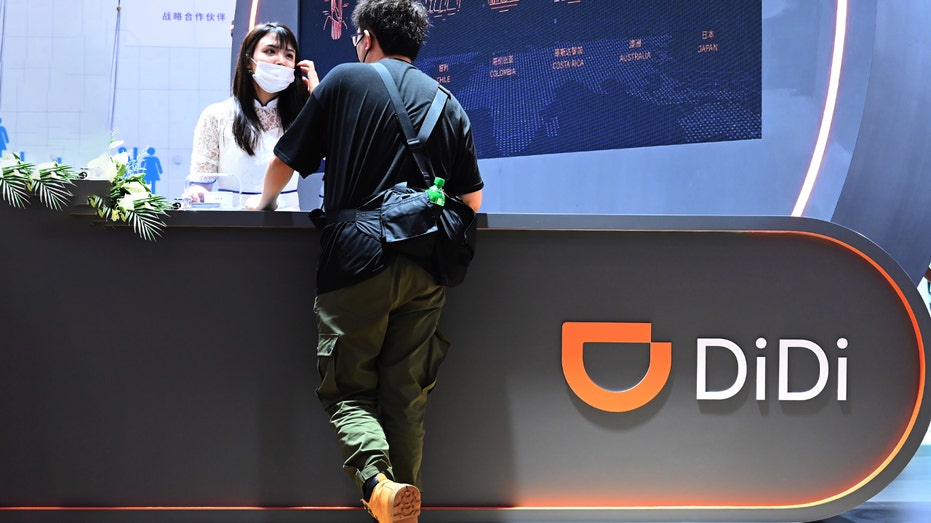 Just days after Didi’s initial public offering in the U.S., Chinese Communist Party regulators cut off the firm’s ability to sign on new users and then followed up by having it booted from app stores over alleged cybersecurity concerns. (Li Shengli/VCG via Getty Images / Getty Images)

"Investors need to be careful around new issues, around IPO's, new companies first coming to the market and then there's a whole other level of due diligence because in China, the accounting regulations aren't the same as they are in the U.S.," Rosecliff Ventures founder and managing partner Mike Murphy told FOX Business' "Varney & Co." on Tuesday.

Murphy went on to call Didi a potential buying opportunity for aggressive U.S. investors looking for a trade given its drop in share price and presence in other countries outside of China, but acknowledged that he does not currently have investments in Chinese firms, himself.

"Long-term, there are so many opportunities here in the United States, both private and public markets, that – there are great companies over in China as well – but I know the U.S. better. I understand the U.S. regulations better," Murphy explained. "So, until I conquer the U.S. and get all the great private companies that are going public here, until I reach that point, I'm going to stay away from China [specifically], but I'll say [stay away from] all economies where you don't really understand the government or what the government may do."

LONDON (Reuters) -Britain will scrap quarantine for fully-vaccinated travellers returning to England and Scotland from France, rowing back on a rule that had infuriated French...