Acting Customs and Border Protection Commissioner Mark Morgan argues the use of forced labor in China is “modern-day slavery.”

BEIJING (Reuters) – China’s ruling Communist Party is demanding a show of greater loyalty from the sprawling private sector as the world’s second-largest economy grapples with growing external risks, from open U.S. hostility to the coronavirus pandemic.

In recent years, the party has sought to tighten its grip on private businesses, by taking stakes in non-state enterprises or installing officials in large firms, even as President Xi Jinping repeatedly pledged to back the sector key to growth and jobs.

LIGHTHIZER SLAMS WTO AFTER CHINA TARIFFS RULING: US 'MUST BE ALLOWED TO DEFEND ITSELF'

Citing rising risks and diversified values and interests among entrepreneurs, the party issued guidelines late on Tuesday advising private firms how to position themselves politically.

Business people must “maintain high consistency” with the party regarding the political aspects of position, direction and principles, say the guidelines published by the Xinhua official news agency. 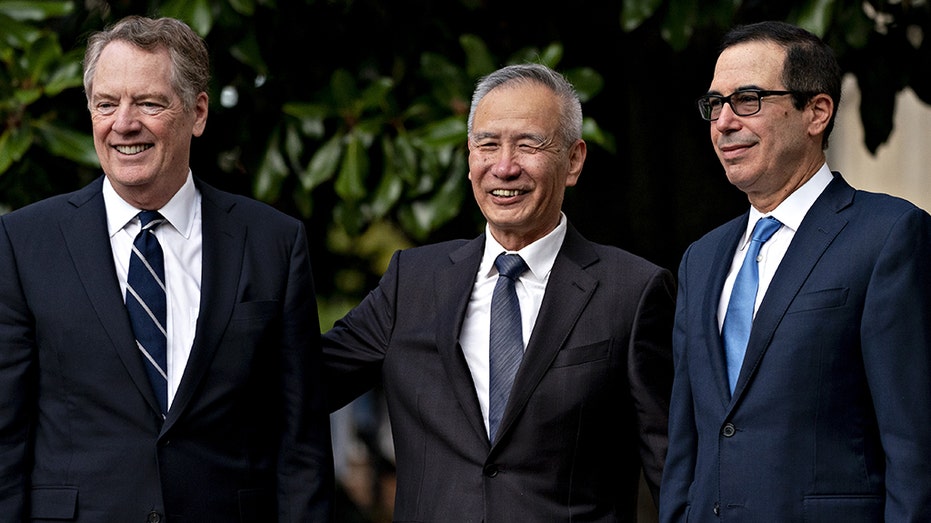 Liu He, China’s vice premier, center, stands with Robert Lighthizer, U.S. trade representative, left, and Steven Mnuchin, U.S. Treasury secretary, while arriving for a meeting with at the Office of the U.S. Trade Representative in Washington, D.C., U

“We should build a backbone team of people in the private economy that can be relied on and used at critical moments,” it said.

The party also encouraged private firms to participate in reforms of state firms and the “Belt and Road” initiative, while pledging to improve the business environment for them.

China’s once-vibrant private firms are struggling to fend off the impact of the virus, despite government pledges to boost credit and tax support and open up more state-dominated sectors, analysts said.

The deepening rift with United States and the pandemic have amplified worries among private businesses over their political status, said Xin Sun, a lecturer in Chinese and East Asian business at King’s College London.

“At the same time, the party does still need contribution from the private sector, especially during such difficult times, in various important economic and political areas.

Conservative Leader Erin O’Toole used his first speech in the House of Commons as party leader to lambaste the Liberal government’s response to the COVID-19...

We will use your email address only for sending you newsletters. Please see our Privacy Notice for details of your data protection rights.Nicola Sturgeon was...

The Internal Revenue Service issued guidelines Wednesday scaling back a tax break for client entertainment, following through on an element of President Donald Trump’s 2017...